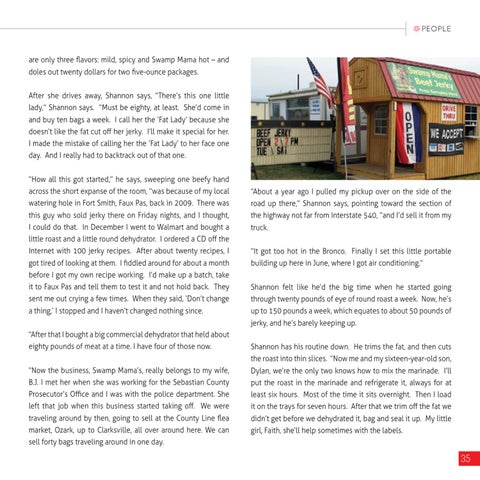 are only three flavors: mild, spicy and Swamp Mama hot – and doles out twenty dollars for two five-ounce packages. After she drives away, Shannon says, “There’s this one little lady,” Shannon says. “Must be eighty, at least. She’d come in and buy ten bags a week. I call her the ‘Fat Lady’ because she doesn’t like the fat cut off her jerky. I’ll make it special for her. I made the mistake of calling her the ‘Fat Lady’ to her face one day. And I really had to backtrack out of that one. “How all this got started,” he says, sweeping one beefy hand across the short expanse of the room, “was because of my local

watering hole in Fort Smith, Faux Pas, back in 2009. There was

road up there,” Shannon says, pointing toward the section of

this guy who sold jerky there on Friday nights, and I thought,

the highway not far from Interstate 540, “and I’d sell it from my

I could do that. In December I went to Walmart and bought a

little roast and a little round dehydrator. I ordered a CD off the Internet with 100 jerky recipes. After about twenty recipes, I

“It got too hot in the Bronco. Finally I set this little portable

got tired of looking at them. I fiddled around for about a month

building up here in June, where I got air conditioning.”

before I got my own recipe working. I’d make up a batch, take it to Faux Pas and tell them to test it and not hold back. They

sent me out crying a few times. When they said, ‘Don’t change

through twenty pounds of eye of round roast a week. Now, he’s

a thing,’ I stopped and I haven’t changed nothing since.

up to 150 pounds a week, which equates to about 50 pounds of jerky, and he’s barely keeping up.

“After that I bought a big commercial dehydrator that held about eighty pounds of meat at a time. I have four of those now.

Shannon has his routine down. He trims the fat, and then cuts the roast into thin slices. “Now me and my sixteen-year-old son,

“Now the business, Swamp Mama’s, really belongs to my wife,

Dylan, we’re the only two knows how to mix the marinade. I’ll

B.J. I met her when she was working for the Sebastian County

put the roast in the marinade and refrigerate it, always for at

Prosecutor’s Office and I was with the police department. She

least six hours. Most of the time it sits overnight. Then I load

left that job when this business started taking off. We were

it on the trays for seven hours. After that we trim off the fat we

traveling around by then, going to sell at the County Line flea

didn’t get before we dehydrated it, bag and seal it up. My little

market, Ozark, up to Clarksville, all over around here. We can

sell forty bags traveling around in one day. 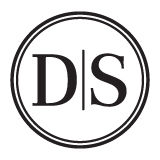