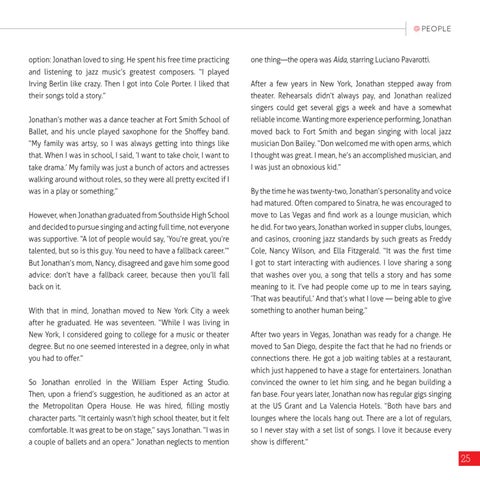 and listening to jazz music’s greatest composers. “I played Irving Berlin like crazy. Then I got into Cole Porter. I liked that

After a few years in New York, Jonathan stepped away from

their songs told a story.”

theater. Rehearsals didn’t always pay, and Jonathan realized singers could get several gigs a week and have a somewhat

Ballet, and his uncle played saxophone for the Shoffey band.

moved back to Fort Smith and began singing with local jazz

“My family was artsy, so I was always getting into things like

musician Don Bailey. “Don welcomed me with open arms, which

that. When I was in school, I said, ‘I want to take choir, I want to

I thought was great. I mean, he’s an accomplished musician, and

take drama.’ My family was just a bunch of actors and actresses

I was just an obnoxious kid.”

walking around without roles, so they were all pretty excited if I was in a play or something.”

By the time he was twenty-two, Jonathan’s personality and voice had matured. Often compared to Sinatra, he was encouraged to

However, when Jonathan graduated from Southside High School

move to Las Vegas and find work as a lounge musician, which

and decided to pursue singing and acting full time, not everyone

he did. For two years, Jonathan worked in supper clubs, lounges,

was supportive. “A lot of people would say, ‘You’re great, you’re

and casinos, crooning jazz standards by such greats as Freddy

talented, but so is this guy. You need to have a fallback career.’”

Cole, Nancy Wilson, and Ella Fitzgerald. “It was the first time

But Jonathan’s mom, Nancy, disagreed and gave him some good

I got to start interacting with audiences. I love sharing a song

advice: don’t have a fallback career, because then you’ll fall

that washes over you, a song that tells a story and has some

meaning to it. I’ve had people come up to me in tears saying, ‘That was beautiful.’ And that’s what I love — being able to give

With that in mind, Jonathan moved to New York City a week

something to another human being.”

after he graduated. He was seventeen. “While I was living in New York, I considered going to college for a music or theater

After two years in Vegas, Jonathan was ready for a change. He

degree. But no one seemed interested in a degree, only in what

moved to San Diego, despite the fact that he had no friends or

you had to offer.”

connections there. He got a job waiting tables at a restaurant, which just happened to have a stage for entertainers. Jonathan

So Jonathan enrolled in the William Esper Acting Studio.

convinced the owner to let him sing, and he began building a

Then, upon a friend’s suggestion, he auditioned as an actor at

the Metropolitan Opera House. He was hired, filling mostly

at the US Grant and La Valencia Hotels. “Both have bars and

lounges where the locals hang out. There are a lot of regulars,

comfortable. It was great to be on stage,” says Jonathan. “I was in

so I never stay with a set list of songs. I love it because every

a couple of ballets and an opera.” Jonathan neglects to mention