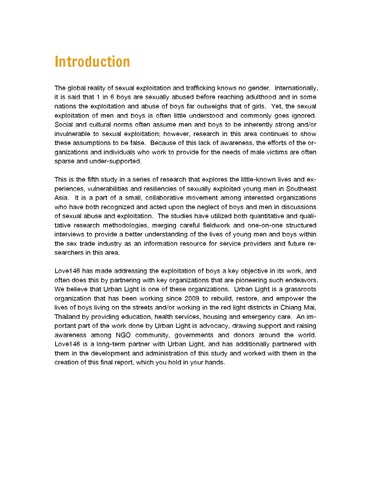 Introduction The global reality of sexual exploitation and trafficking knows no gender. Internationally, it is said that 1 in 6 boys are sexually abused before reaching adulthood and in some nations the exploitation and abuse of boys far outweighs that of girls. Yet, the sexual exploitation of men and boys is often little understood and commonly goes ignored. Social and cultural norms often assume men and boys to be inherently strong and/or invulnerable to sexual exploitation; however, research in this area continues to show these assumptions to be false. Because of this lack of awareness, the efforts of the organizations and individuals who work to provide for the needs of male victims are often sparse and under-supported. This is the fifth study in a series of research that explores the little-known lives and experiences, vulnerabilities and resiliencies of sexually exploited young men in Southeast Asia. It is a part of a small, collaborative movement among interested organizations who have both recognized and acted upon the neglect of boys and men in discussions of sexual abuse and exploitation. The studies have utilized both quantitative and qualitative research methodologies, merging careful fieldwork and one-on-one structured interviews to provide a better understanding of the lives of young men and boys within the sex trade industry as an information resource for service providers and future researchers in this area. Love146 has made addressing the exploitation of boys a key objective in its work, and often does this by partnering with key organizations that are pioneering such endeavors. We believe that Urban Light is one of these organizations. Urban Light is a grassroots organization that has been working since 2009 to rebuild, restore, and empower the lives of boys living on the streets and/or working in the red light districts in Chiang Mai, Thailand by providing education, health services, housing and emergency care. An important part of the work done by Urban Light is advocacy, drawing support and raising awareness among NGO community, governments and donors around the world. Love146 is a long-term partner with Urban Light, and has additionally partnered with them in the development and administration of this study and worked with them in the creation of this final report, which you hold in your hands.

An exploratory story on the exploitation and vulnerability of male entertainment workers in Chiang Mai, Thailand. One of the ONLY research papers at this time focused on the plight and abuse of young males. 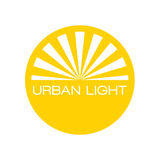