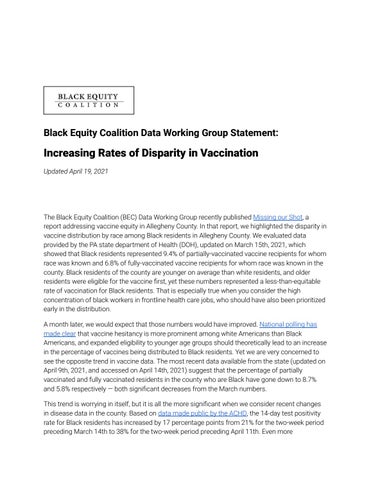 The Black Equity Coalition (BEC) Data Working Group recently published Missing our Shot, a report addressing vaccine equity in Allegheny County. In that report, we highlighted the disparity in vaccine distribution by race among Black residents in Allegheny County. We evaluated data provided by the PA state department of Health (DOH), updated on March 15th, 2021, which showed that Black residents represented 9.4% of partially-vaccinated vaccine recipients for whom race was known and 6.8% of fully-vaccinated vaccine recipients for whom race was known in the county. Black residents of the county are younger on average than white residents, and older residents were eligible for the vaccine first, yet these numbers represented a less-than-equitable rate of vaccination for Black residents. That is especially true when you consider the high concentration of black workers in frontline health care jobs, who should have also been prioritized early in the distribution. A month later, we would expect that those numbers would have improved. National polling has made clear that vaccine hesitancy is more prominent among white Americans than Black Americans, and expanded eligibility to younger age groups should theoretically lead to an increase in the percentage of vaccines being distributed to Black residents. Yet we are very concerned to see the opposite trend in vaccine data. The most recent data available from the state (updated on April 9th, 2021, and accessed on April 14th, 2021) suggest that the percentage of partially vaccinated and fully vaccinated residents in the county who are Black have gone down to 8.7% and 5.8% respectively — both significant decreases from the March numbers. This trend is worrying in itself, but it is all the more significant when we consider recent changes in disease data in the county. Based on data made public by the ACHD, the 14-day test positivity rate for Black residents has increased by 17 percentage points from 21% for the two-week period preceding March 14th to 38% for the two-week period preceding April 11th. Even more

concerning, the Black hospitalization rate has increased from 12.2 to 27.5 hospitalizations per 100,000 residents between the week ending March 7th and the week ending on April 4th (see figure below). Both of these rates of increase far exceed change in the corresponding rates for the white population over the same periods, Black residents are six times more likely to be hospitalized from Covid-19 than white residents in the county, and the Black test positivity rate is now higher than it has been in the county at any point during the crisis. 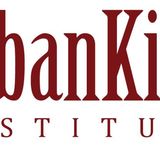