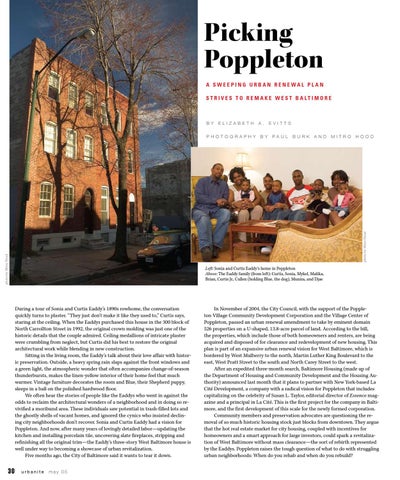 During a tour of Sonia and Curtis Eaddy’s 1890s rowhome, the conversation quickly turns to plaster. “They just don’t make it like they used to,” Curtis says, staring at the ceiling. When the Eaddys purchased this house in the 300 block of North Carrollton Street in 1992, the original crown molding was just one of the historic details that the couple admired. Ceiling medallions of intricate plaster were crumbling from neglect, but Curtis did his best to restore the original architectural work while blending in new construction. Sitting in the living room, the Eaddy’s talk about their love affair with historic preservation. Outside, a heavy spring rain slaps against the front windows and a green light, the atmospheric wonder that often accompanies change-of-season thunderbursts, makes the linen-yellow interior of their home feel that much warmer. Vintage furniture decorates the room and Blue, their Shepherd puppy, sleeps in a ball on the polished hardwood floor. We often hear the stories of people like the Eaddys who went in against the odds to reclaim the architectural wonders of a neighborhood and in doing so revivified a moribund area. These individuals saw potential in trash-filled lots and the ghostly shells of vacant homes, and ignored the cynics who insisted declining city neighborhoods don’t recover. Sonia and Curtis Eaddy had a vision for Poppleton. And now, after many years of lovingly detailed labor—updating the kitchen and installing porcelain tile, uncovering slate fireplaces, stripping and refinishing all the original trim—the Eaddy’s three-story West Baltimore house is well under way to becoming a showcase of urban revitalization. Five months ago, the City of Baltimore said it wants to tear it down.

In November of 2004, the City Council, with the support of the Poppleton Village Community Development Corporation and the Village Center of Poppleton, passed an urban renewal amendment to take by eminent domain 526 properties on a U‑shaped, 13.8-acre parcel of land. According to the bill, the properties, which include those of both homeowners and renters, are being acquired and disposed of for clearance and redevelopment of new housing. This plan is part of an expansive urban renewal vision for West Baltimore, which is bordered by West Mulberry to the north, Martin Luther King Boulevard to the east, West Pratt Street to the south and North Carey Street to the west. After an expedited three-month search, Baltimore Housing (made up of the Department of Housing and Community Development and the Housing Authority) announced last month that it plans to partner with New York-based La Cité Development, a company with a radical vision for Poppleton that includes capitalizing on the celebrity of Susan L. Taylor, editorial director of Essence magazine and a principal in La Cité. This is the first project for the company in Baltimore, and the first development of this scale for the newly formed corporation. Community members and preservation advocates are questioning the removal of so much historic housing stock just blocks from downtown. They argue that the hot real estate market for city housing, coupled with incentives for homeowners and a smart approach for large investors, could spark a revitalization of West Baltimore without mass clearance—the sort of rebirth represented by the Eaddys. Poppleton raises the tough question of what to do with struggling urban neighborhoods: When do you rehab and when do you rebuild? 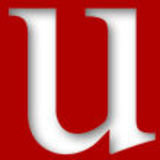