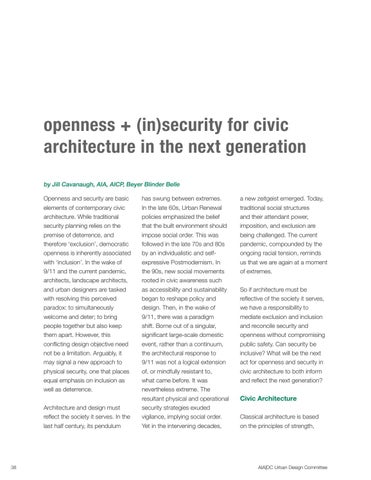 openness + (in)security for civic architecture in the next generation by Jill Cavanaugh, AIA, AICP, Beyer Blinder Belle Openness and security are basic elements of contemporary civic architecture. While traditional security planning relies on the premise of deterrence, and therefore ‘exclusion’, democratic openness is inherently associated with ‘inclusion’. In the wake of 9/11 and the current pandemic, architects, landscape architects, and urban designers are tasked with resolving this perceived paradox: to simultaneously welcome and deter; to bring people together but also keep them apart. However, this conflicting design objective need not be a limitation. Arguably, it may signal a new approach to physical security, one that places equal emphasis on inclusion as well as deterrence. Architecture and design must reflect the society it serves. In the last half century, its pendulum

has swung between extremes. In the late 60s, Urban Renewal policies emphasized the belief that the built environment should impose social order. This was followed in the late 70s and 80s by an individualistic and selfexpressive Postmodernism. In the 90s, new social movements rooted in civic awareness such as accessibility and sustainability began to reshape policy and design. Then, in the wake of 9/11, there was a paradigm shift. Borne out of a singular, significant large-scale domestic event, rather than a continuum, the architectural response to 9/11 was not a logical extension of, or mindfully resistant to, what came before. It was nevertheless extreme. The resultant physical and operational security strategies exuded vigilance, implying social order. Yet in the intervening decades,

a new zeitgeist emerged. Today, traditional social structures and their attendant power, imposition, and exclusion are being challenged. The current pandemic, compounded by the ongoing racial tension, reminds us that we are again at a moment of extremes. So if architecture must be reflective of the society it serves, we have a responsibility to mediate exclusion and inclusion and reconcile security and openness without compromising public safety. Can security be inclusive? What will be the next act for openness and security in civic architecture to both inform and reflect the next generation?

Civic Architecture Classical architecture is based on the principles of strength,

This journal, Avenues, Volume 3, is the third installment of an annual publication – with the sole intent of collecting and distributing the shared urgent challenges, contemporary approaches, and outstanding questions we have uncovered over the past year. Produced by the Urban Design Committee of the Washington Chapter of the American Institute of Architects. 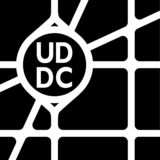