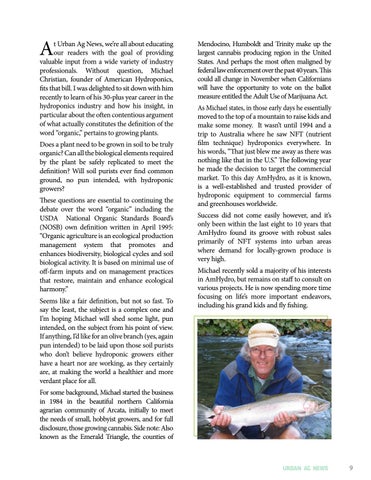 t Urban Ag News, we’re all about educating our readers with the goal of providing valuable input from a wide variety of industry professionals. Without question, Michael Christian, founder of American Hydroponics, fits that bill. I was delighted to sit down with him recently to learn of his 30-plus year career in the hydroponics industry and how his insight, in particular about the often contentious argument of what actually constitutes the definition of the word “organic,” pertains to growing plants. Does a plant need to be grown in soil to be truly organic? Can all the biological elements required by the plant be safely replicated to meet the definition? Will soil purists ever find common ground, no pun intended, with hydroponic growers? These questions are essential to continuing the debate over the word “organic” including the USDA National Organic Standards Board’s (NOSB) own definition written in April 1995: “Organic agriculture is an ecological production management system that promotes and enhances biodiversity, biological cycles and soil biological activity. It is based on minimal use of off-farm inputs and on management practices that restore, maintain and enhance ecological harmony.” Seems like a fair definition, but not so fast. To say the least, the subject is a complex one and I’m hoping Michael will shed some light, pun intended, on the subject from his point of view. If anything, I’d like for an olive branch (yes, again pun intended) to be laid upon those soil purists who don’t believe hydroponic growers either have a heart nor are working, as they certainly are, at making the world a healthier and more verdant place for all.

Mendocino, Humboldt and Trinity make up the largest cannabis producing region in the United States. And perhaps the most often maligned by federal law enforcement over the past 40 years. This could all change in November when Californians will have the opportunity to vote on the ballot measure entitled the Adult Use of Marijuana Act. As Michael states, in those early days he essentially moved to the top of a mountain to raise kids and make some money. It wasn’t until 1994 and a trip to Australia where he saw NFT (nutrient film technique) hydroponics everywhere. In his words, “That just blew me away as there was nothing like that in the U.S.” The following year he made the decision to target the commercial market. To this day AmHydro, as it is known, is a well-established and trusted provider of hydroponic equipment to commercial farms and greenhouses worldwide. Success did not come easily however, and it’s only been within the last eight to 10 years that AmHydro found its groove with robust sales primarily of NFT systems into urban areas where demand for locally-grown produce is very high. Michael recently sold a majority of his interests in AmHydro, but remains on staff to consult on various projects. He is now spending more time focusing on life’s more important endeavors, including his grand kids and fly fishing.

For some background, Michael started the business in 1984 in the beautiful northern California agrarian community of Arcata, initially to meet the needs of small, hobbyist growers, and for full disclosure, those growing cannabis. Side note: Also known as the Emerald Triangle, the counties of 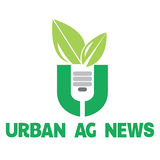 Kimbal Musk is Spreading a "Community through Food" Philosophy • A Conversation about Organic Hydroponics with Industry Pioneer Michael Chri...

Kimbal Musk is Spreading a "Community through Food" Philosophy • A Conversation about Organic Hydroponics with Industry Pioneer Michael Chri...