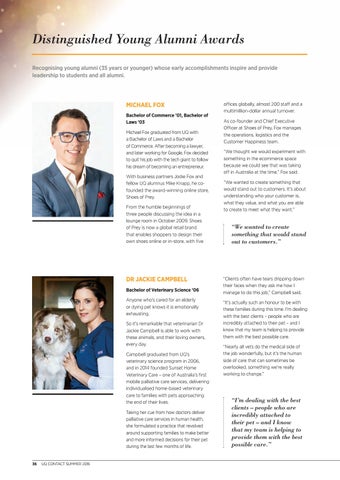 MICHAEL FOX Bachelor of Commerce ’01, Bachelor of Laws ’03 Michael Fox graduated from UQ with a Bachelor of Laws and a Bachelor of Commerce. After becoming a lawyer, and later working for Google, Fox decided to quit his job with the tech giant to follow his dream of becoming an entrepreneur. With business partners Jodie Fox and fellow UQ alumnus Mike Knapp, he cofounded the award-winning online store, Shoes of Prey. From the humble beginnings of three people discussing the idea in a lounge room in October 2009, Shoes of Prey is now a global retail brand that enables shoppers to design their own shoes online or in-store, with five

DR JACKIE CAMPBELL Bachelor of Veterinary Science ’06 Anyone who’s cared for an elderly or dying pet knows it is emotionally exhausting. So it’s remarkable that veterinarian Dr Jackie Campbell is able to work with these animals, and their loving owners, every day. Campbell graduated from UQ’s veterinary science program in 2006, and in 2014 founded Sunset Home Veterinary Care – one of Australia’s first mobile palliative care services, delivering individualised home-based veterinary care to families with pets approaching the end of their lives. Taking her cue from how doctors deliver palliative care services in human health, she formulated a practice that revolved around supporting families to make better and more informed decisions for their pet during the last few months of life.

offices globally, almost 200 staff and a multimillion-dollar annual turnover. As co-founder and Chief Executive Officer at Shoes of Prey, Fox manages the operations, logistics and the Customer Happiness team. “We thought we would experiment with something in the ecommerce space because we could see that was taking off in Australia at the time,” Fox said. “We wanted to create something that would stand out to customers. It’s about understanding who your customer is, what they value, and what you are able to create to meet what they want.”

“We wanted to create something that would stand out to customers.”

“Clients often have tears dripping down their faces when they ask me how I manage to do this job,” Campbell said. “It’s actually such an honour to be with these families during this time. I’m dealing with the best clients – people who are incredibly attached to their pet – and I know that my team is helping to provide them with the best possible care. “Nearly all vets do the medical side of the job wonderfully, but it’s the human side of care that can sometimes be overlooked, something we’re really working to change.”

“I’m dealing with the best clients – people who are incredibly attached to their pet – and I know that my team is helping to provide them with the best possible care.”

BEN MILBOURNE Bachelor of Applied Science (Human Movement Studies) ’04 In 2012, then high school science teacher Ben Milbourne cooked his way to the finals of season four of hit TV show MasterChef. Now, as a celebrity chef, entrepreneur and community leader, Milbourne has turned his passion for cooking into a successful media career, teaching millions of people worldwide about the joys of food. With a Bachelor of Applied Science (Human Movement Studies) from UQ, Milbourne’s initial career aspirations lay in teaching secondary school science, and health and physical education.

MIKE KNAPP Bachelor of Laws ’03, Bachelor of Science (Computer Science) ’03 Mike Knapp graduated from UQ with degrees in Computer Science and Law in 2003. After a stint as a Judge’s Associate in the District Court of Queensland, and time with Google, Knapp decided his passion lay in online business and the start-up world. Today, Knapp is best known as co-founder and Chief Technology Officer of Shoes of Prey. Knapp’s role involves day-to-day strategy and management, as well as overseeing the software engineering, marketing and operations teams. “I probably didn’t take my computer science

SELENA UIBO Bachelor of Education (Secondary) ’10, Bachelor of Arts ’10 After taking up a teaching post in her mother’s hometown of Numbulwar in the Northern Territory in 2012, Selena Uibo set out to inspire her students with her own positive scholastic experiences. Now she is inspiring her community on a bigger stage after being elected as the Labor Member for Arnhem in the Northern Territory election held in August this year. “I’ve grown up seeing the things that happen and the things that don’t happen in the community and the frustrations that can come from when things aren’t moving ahead,” Uibo said. “There are improvements needed and there

“I never thought I would be on the path that I am now. But my ability to do what I do, and be able to grow in every position I’ve been in, has been due to my ability to learn quickly from the people around me,” Milbourne said. “Learning is the key. Take as much as you can from every experience and the paths will open up for you.”

“My ability to do what I do, and be able to grow in every position I’ve been in, has been due to my ability to learn quickly from the people around me.”

as seriously as I should have while I was at UQ. Looking back now, I realise that it really was my passion,” Knapp said. “I saw myself being a barrister or a lawyer. I think being an entrepreneur is a very different lifestyle, which I enjoy.” Knapp and his co-founders continue to expand the business, with their most recent fundraising round raising US$15.5 million in venture capital. Shoes of Prey has been recognised with many awards including the Online Retailer Hall of Fame 2016, Best International Conqueror 2015 and Online Retailer of the Year 2014 at the Online Retail Industry Awards, and Online Retailer of the Year 2013 at the Australian Retail Awards.

are things that I particularly think I can help with. I thought I’d be a good advocate, not just for my area but across the Arnhem region.” Uibo graduated as valedictorian with a Bachelor of Arts and Bachelor of Education in 2010. She has worked closely with secondary school-aged students, teaching them practical business skills through the Second Chance Shop, a student-operated second-hand shop, and Numburindi Arts, a sales and distribution hub for local art and craft items. In 2013 Uibo won a Commonwealth Bank Foundation Teaching Award for teaching financial literacy to her senior students in Numbulwar. In 2015 Uibo was elected as the chairperson for the Numbulwar Local Authority, which represents local issues and priorities at the Local Government Regional Council. 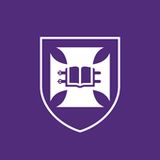 More from University of Queensland