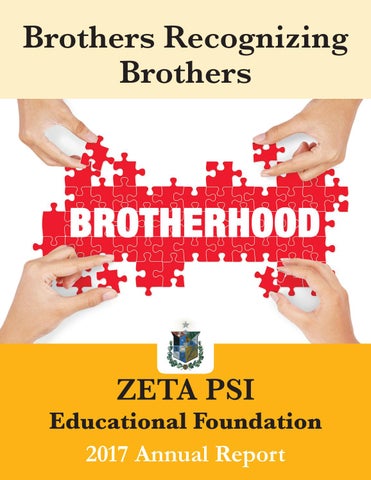 Welcome to the 2017 Zeta Psi Educational Foundation Annual Report. Our Foundation has shown tremendous strength over the past year. Soaring past a $2,000,000 capital campaign, continuing to invest and manage our assets for growth without undue risk, actively awarding scholarships and supporting extensive leadership training all led to a great year. Because of your ongoing support of Zeta Psi’s Educational Foundation, we now are pleased to report that we now have almost $8,000,000 in assets – and we use every dollar of those proceeds to support undergraduate members. The Capital Campaign committee, chaired by Stuart Bowers, and supported by Greg McElroy overachieved tremendously. I’d like to thank the committee and all who participated. This effort has helped us begin to financially support our ongoing Leadership Training activities and significantly enhance our educational programming The 1847 Pledge, led by Will Woldenberg and Barth Gillan, is an initiative to broaden and strengthen our elder connections, and ultimately, our donor base. Still in its infancy, it represents the type of innovative experiment that will help us maintain more robust relationships with our alumni. The 1847 Pledge Championship Belt was awarded to the Tulane Alumni Association of Zeta Psi at our Annual Meeting in August. We know they will strongly defend it, but we hope that many other alumni associations will try to take the Belt when the 1847 Pledge returns next year.

Looking ahead, I believe we need to extend our impact beyond the excellent, but limited reach of our in-person training at LTI and the Kirby Presidents Conference. A larger part of our resources should be online tools, which are now commonplace in their usability and acceptance by our members. The Member Education Committee of the Foundation has excellent volunteer participation and will be evaluating how we can maximize the impact of our foundation’s assets.

Our Foundation continues to impact young men, just as John Van Nostrand Dorr and the other pioneers of our Foundation envisioned over 70 years ago. Today’s Foundation adds substantial and ongoing value to the undergraduate experience with a broad array of leadership training, career preparation and learning experiences outside of the classroom. It is a privilege to serve as its President.

Reflecting on a Decade of Service to Membership Development Maurice Ducoing stepped down as chair of Zeta Psi’s Membership Education Committee of Zeta Psi at the 170th Annual Convention in Louisville, Kentucky, completing ten years of dedicated service and vision to our noble order. Maurice was asked to lead the committee at the 2007 convention by Greg McElroy and one can see the Leadership Training Institutes’ new structure and vision. Classes were created in Leadership and Organizational Development (LOD), Networking and Career Development (NCD) and Risk Management and Law (RML). As Maurice said at the Convention this summer, the program was “tasked with creating young men to not only be successful professionals, but professional men.” The program teaches active Zetes various ways in which they can improve their individual chapters and professional lives. Maurice’s leadership can also be seen in other areas outside of the Regional LTI programming. His vision overhauled the Kirby President’s Conference at Lafayette College and as a result, he developed the scenario-based learning aspects of the retreat. This is a way to immerse our students in real time decision-making through the exploration of lifelike situations and scenarios. Maurice’s vision also changed the first LTI course that is taught in the program, Risk Management 101. It is now in an E-learning format that has been seen by every new member in the organization over the past four years. The Convention LTI has developed more professional courses and now helps deal with the topics that are most important to the Fraternity and Educational Foundation in a profound way. As he stated in his convention speech, Maurice was tasked to ‘dream big but deliver bigger” and Zeta Psi is all the better for his leadership. Thank you, Maurice.

“Feeling gratitude and not expressing it is like wrapping a present and not giving it.” William Arthur Ward

As we express our gratitude, we must never forget that the highest appreciation is not to utter words, but to live by them. John F. Kennedy

Brother Will Woldenberg, Beta Tau, accepting the 1847 Pledge championship belt from Executive Director Lauck Walton on behalf of his chapter.

1847 Pledge On June 1st, 2017, Zeta Psi launched the 1847 Pledge. In an effort to strengthen our local alumni associations and improve our leadership training programs, the two-week fundraising campaignâ&amp;#x20AC;&amp;#x2122;s goal was for all Zetes to donate $18.47. Through the 1847 Pledge, Zeta Psi raised an impressive $22,600. Most impressive of all was the overwhelmingly strong support from brothers across the globe. This total was achieved due to the individual donations of 590 brothers representing 54 different chapters. The vast majority (76%) of brothers donated $18.47, which demonstrates the power of numbers in our brotherhood.

13 chapters responsible for 68% of total donors

ZY 2016-17 Zeta Psi Regional LTI Report During the 2016-17 academic year, the Zeta Psi Educational Foundation continued to provide extensive membership development training to its undergraduate members while laying the groundwork for the programâ&amp;#x20AC;&amp;#x2122;s future. Between September 2016 and April 2017, the Regional Leadership Training Institute reached 538 members through eight events that spanned three countries. While total attendance is down due to fewer events, average attendance continues its five-year upward trend. This is what we would like for the future of the Regional LTI program: well-attended professional development events in various geographical areas that are delivered as part of a holistic membership education experience.

Attendance The 2016-17 regional LTI schedule consisted of eight LTIs in three countries. A total of 538 active brothers from 43 active chapters and colonies attended a regional LTI this year. LTI events this year maintained an average attendance of 67.25 brothers, the highest total ever for the LTI program. The drop in total attendance is attributable to a streamlined event calendar, ensuring that all Regional LTIs are equipped with the appropriate budgetary and volunteer support. The graphs below detail the five-year growth trend in detail. In addition to the regional LTI program, the Risk Management 101 program saw 860 members complete the course, including each of the current chapter presidents. Since the inception of the e-learning course, 99.5% of Zeta Psiâ&amp;#x20AC;&amp;#x2122;s new initiates have successfully completed the program.

For the 2017-18 academic year, the LTI program aims to overhaul the entire Regional LTI format by moving away from low quality venues and hotels towards higher-end meeting 80 12 800 facilities. We also will be presenting a more polished final 70 700 10 product. As we move forward, Zetes should expect each 60 600 8 Regional LTI to be held at a professional conferencing facility 2012-13 50 500 2013-14 40 with modern amenities and quality catering. Zetes should 400 6 2014-15 2015-16 30 300 also expect to hear more from campus and community 4 2016-17 20 200 experts as the program will work to expand partnerships 2 10 100 with local organizations in each region. Finally, Zetes 0 0 0 can expect Regional LTIs to become gathering places for Total Sessions Average Attendance Total Attendance both active and elder members of the fraternity. The Regional LTI program will select locations with strong elder presences, and will invite all local elders to participate in the final portion of each Regional LTI. This collaboration between actives and elders will help strengthen the bonds between them in each region and lead to a more productive relationship for all. Finally, each Regional LTI will be immediately followed by a networking reception where Zetes can gain professional insights and opportunities from other Zetes. To balance the budget, lodging stipends to chapters will be greatly diminished or eliminated entirely. This will eliminate the behavioral issues that have plagued some events over the years and ensure that all undergraduates in attendance are required to make a small personal investment in these events. While funding for lodging will be a new expense for the chapter, moving the events to major urban centers should allow for undergraduates to stay with family or elders in these cities. Active chapters are also encouraged to approach their elder chapter for assistance with lodging should they be unable to secure accommodations of their own. Overall, this will bring the Regional LTI program in line with the professional quality of the International Convention, the Kirby Presidents Conference and our digital offerings.

Annual Fund The Annual Fund provides direct operating support for the Zeta Psi Educational Foundation each year. Donations to the Annual Fund make an immediate and direct impact on our ability to conduct the LTI program at the International Convention. They also support chapter visits and regional work by IHQ staff members and provide desperately needed scholarships to students in need. The Foundation supports the ZeteForward plan by helping to educate our members about having a healthier and safer collegiate experience. ZeteForward seeks to inform our members about the kinds of choices they may come up against when dealing with alcohol, hazing and sexual misconduct. Armed with this information, we hope they will make better choices on campus and in life. We believe that this improves the likelihood of keeping strong grades and staying on track to graduate with a clean disciplinary record. The Foundation looks to develop each brother’s character and intellect in a safe, supportive and fun environment. It’s your gifts that make this possible. The cumulative giving lists on pages 9-11 recognize all of the Foundation members that supported Zeta Psi and any of our programs over the past year. The vast majority of these men do that by contributing to our annual direct mail campaign. Thank you to all of our generous supporters who have made supporting the Zeta Psi Educational Foundation a priority. We also want to thank you for continuing your support during the 2017-18 academic year and beyond. We could not do this important work without your gifts.

We’d like to thank the following for their efforts in putting this Annual Report together. Max Anderson Editor in Chief

Brothers Alfred Miesemer, Stephen Haire, and Ira Berkowitz. Brother Haire was a recipient of Zeta Psi’s Little Brother scholarship program, which paid for the entirety of his convention fees.

Financials YOUR SUPPORT IS PUT TO USE VERY WISELY!

2016-17 Performance Highlights • The Zeta Psi Educational Foundation increased its Leadership Training support through the Convention LTI program, the Regional LTI program and the Kirby Leadership Conference. The LTI program has dedicated staffing from Joseph Alessi, Director of Membership Education. All Zeta Psi IHQ staff participate in the LTI program. • Net Assets increased by almost $800,000 due to favorable investment conditions. • Our Investment Advisory Committee maintains the endowment funds at AllianceBernstein, a highly-regarded global asset management firm. Zeta Psi has adopted an investment policy that is divided between equities and debt instruments. The Committee, with the approval of the Board of Trustees, currently permits investments in equities up to 70% of the total portfolio.

• The Foundation has almost no liabilities. Every dollar is put to work for Zeta Psi.

ZETA PSI EDUCATIONAL FOUNDATION Condensed Audit Results FOR THE YEARS ENDED MAY 31, 2017 AND 2016

Foundation members may request the complete audited financial statements by contacting the IHQ.

Annual report for the Zeta Psi Educational Foundation for the latest fiscal year. 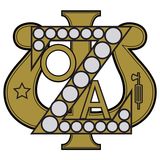