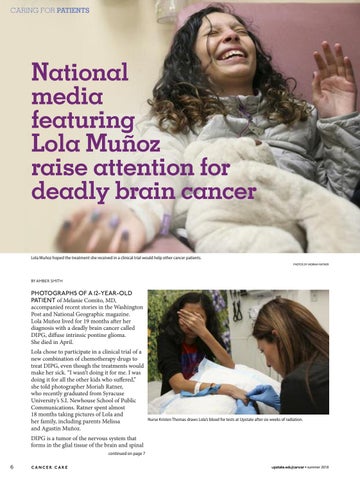 PHOTOGRAPHS OF A 12-YEAR-OLD PATIENT of Melanie Comito, MD, accompanied recent stories in the Washington Post and National Geographic magazine. Lola Muñoz lived for 19 months aer her diagnosis with a deadly brain cancer called DIPG, diﬀuse intrinsic pontine glioma. She died in April. Lola chose to participate in a clinical trial of a new combination of chemotherapy drugs to treat DIPG, even though the treatments would make her sick. “I wasn’t doing it for me. I was doing it for all the other kids who suﬀered,” she told photographer Moriah Ratner, who recently graduated from Syracuse University’s S.I. Newhouse School of Public Communications. Ratner spent almost 18 months taking pictures of Lola and her family, including parents Melissa and Agustin Muñoz. 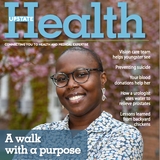 Welcome to the summer 2018 edition of Cancer Care magazine, produced by the Upstate Cancer Center.

Welcome to the summer 2018 edition of Cancer Care magazine, produced by the Upstate Cancer Center.