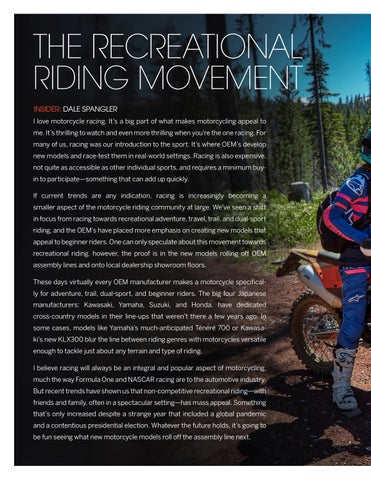 THE RECREATIONAL RIDING MOVEMENT INSIDER: DALE SPANGLER I love motorcycle racing. It’s a big part of what makes motorcycling appeal to me. It’s thrilling to watch and even more thrilling when you’re the one racing. For many of us, racing was our introduction to the sport. It’s where OEM’s develop new models and race-test them in real-world settings. Racing is also expensive, not quite as accessible as other individual sports, and requires a minimum buyin to participate—something that can add up quickly. If current trends are any indication, racing is increasingly becoming a smaller aspect of the motorcycle riding community at large. We’ve seen a shift in focus from racing towards recreational adventure, travel, trail, and dual-sport riding, and the OEM’s have placed more emphasis on creating new models that appeal to beginner riders. One can only speculate about this movement towards recreational riding, however, the proof is in the new models rolling off OEM assembly lines and onto local dealership showroom floors. These days virtually every OEM manufacturer makes a motorcycle specifically for adventure, trail, dual-sport, and beginner riders. The big four Japanese manufacturers: Kawasaki, Yamaha, Suzuki, and Honda, have dedicated cross-country models in their line-ups that weren’t there a few years ago. In some cases, models like Yamaha’s much-anticipated Ténéré 700 or Kawasaki’s new KLX300 blur the line between riding genres with motorcycles versatile enough to tackle just about any terrain and type of riding. I believe racing will always be an integral and popular aspect of motorcycling, much the way Formula One and NASCAR racing are to the automotive industry. But recent trends have shown us that non-competitive recreational riding—with friends and family, often in a spectacular setting—has mass appeal. Something that’s only increased despite a strange year that included a global pandemic and a contentious presidential election. Whatever the future holds, it’s going to be fun seeing what new motorcycle models roll off the assembly line next. 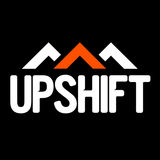 IN THIS ISSUE: THE INSIDER: THE RECREATIONAL RIDING MOVEMENT INSTA-ADV: INSTAGRAM TRAVELERS BIKES-GEAR: THE LATEST WIDE OPEN: VIEWS THROUGH...

IN THIS ISSUE: THE INSIDER: THE RECREATIONAL RIDING MOVEMENT INSTA-ADV: INSTAGRAM TRAVELERS BIKES-GEAR: THE LATEST WIDE OPEN: VIEWS THROUGH...