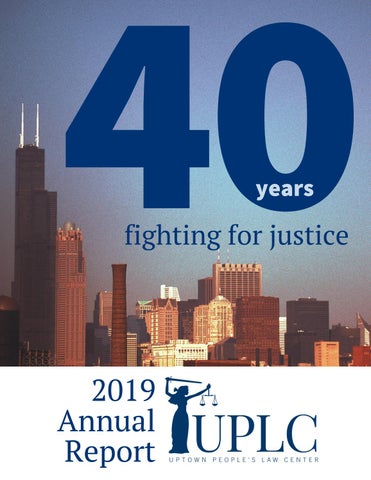 Times sure have changed since Uptown People's Law Center was incorporated, & our Executive Director Alan Mills first walked through its doors as a law student! Thanks to your support, we are continuing vital fights protecting the rights of prisoners, tenants, and disabled people!

the % of people in prison in Illinois has more than tripled the average rent in Chicago, adjusted for inflation, has gone up over 182% (much more in Uptown)  Uptown has lost over 5,000 units of low-income housing

Donors like YOU are the reason UPLC has been able to do vital work for 40 years!

YOU have enabled the fight for poor people in the Uptown neighborhood...

YOU have aided the struggle to successfully close Tamms supermax prison...

YOU make sure prisoners and tenants whose rights are being violated have somewhere to turn!

Your supportÂ touches lives... Haywood has lived in Uptown for decades. In July 2019, he came to UPLC when he received an eviction notice. Due to multiple physical disabilities, his only income is Social Security benefits. While Haywood is regularly able to find the money necessary to cover his rent, one month he was unable to do so. He received no notice from his landlord, and the following month went to pay his rent for both months. His landlord refused the payment and handed him an eviction notice. Our staff spent months on this case. We worked with the VA, who agreed to assist Haywood in paying the amount not covered by his Social Security benefits. In October 2019, we settled his case, ensuring he is able to remain in his apartment and not lose his housing subsidy. Nancy came to UPLC in late 2018, after she had been denied Social Security benefits. Nancyâ&#x20AC;&#x2122;s severe osteoarthritis in her right knee, combined with PTSD from a childhood of physical and sexual abuse, prevents her from holding a job. Nancy has begun receiving regular mental health care, and after nearly a year, was approved to receive Social Security disability benefits! Richard was living in a shelter for several years. He was recently denied Social Security benefits when his caseworker brought him to UPLC. Untreated major depressive disorder, severe osteoarthritis, and peripheral neuropathy had led to years of unemployment and substance use. While living at the shelter, he committed himself to staying sober and getting his GED. Richard came to UPLC in 2018 after he could no longer afford the bus fare to attend his classes at Truman College. Our staff worked on his case for over a year, and in October 2019, he finally received Social Security benefits. He's now moved out of the shelter and is returning to school!

Your generosity is changing the prison system! MentalÂ Health Care for Prisoners

This year we SETTLED our health care case, which will completely overhaul the way sick, injured, or otherwise physically ailing prisoners are treated in Illinois. We are monitoring the changes that IDOC is making. UPLC is still pursuing our class action case about the overuse and misuse of solitary confinement (which the UN says is torture over 15 days). We are also monitoring our other settled cases, including the treatment of deaf and hard of hearing prisoners to ensure they are provided hearing aids, translators, and more.

Expenses Over 89Â˘ of every dollar you donate goes to UPLC programs & operations!

UPLC is growing...& YOU are part of that growth! Staff

You make a difference!