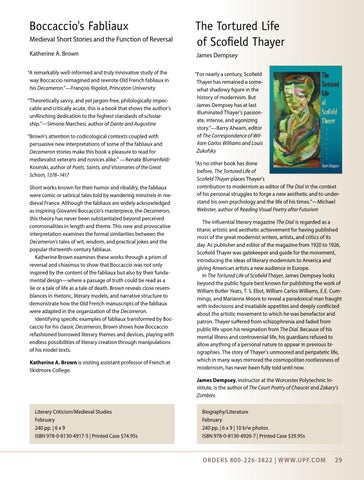 Boccaccio's Fabliaux Medieval Short Stories and the Function of Reversal Katherine A. Brown “A remarkably well-informed and truly innovative study of the way Boccaccio reimagined and rewrote Old French fabliaux in his Decameron.”—François Rigolot, Princeton University “Theoretically savvy, and yet jargon-free, philologically impeccable and critically acute, this is a book that shows the author’s unflinching dedication to the highest standards of scholarship.”—Simone Marchesi, author of Dante and Augustine “Brown’s attention to codicological contexts coupled with persuasive new interpretations of some of the fabliaux and Decameron stories make this book a pleasure to read for medievalist veterans and novices alike.” —Renate BlumenfeldKosinski, author of Poets, Saints, and Visionaries of the Great Schism, 1378–1417 Short works known for their humor and ribaldry, the fabliaux were comic or satirical tales told by wandering minstrels in medieval France. Although the fabliaux are widely acknowledged as inspiring Giovanni Boccaccio’s masterpiece, the Decameron, this theory has never been substantiated beyond perceived commonalities in length and theme. This new and provocative interpretation examines the formal similarities between the Decameron’s tales of wit, wisdom, and practical jokes and the popular thirteenth-century fabliaux. Katherine Brown examines these works through a prism of reversal and chiasmus to show that Boccaccio was not only inspired by the content of the fabliaux but also by their fundamental design—where a passage of truth could be read as a lie or a tale of life as a tale of death. Brown reveals close resemblances in rhetoric, literary models, and narrative structure to demonstrate how the Old French manuscripts of the fabliaux were adapted in the organization of the Decameron. Identifying specific examples of fabliaux transformed by Boccaccio for his classic Decameron, Brown shows how Boccaccio refashioned borrowed literary themes and devices, playing with endless possibilities of literary creation through manipulations of his model texts. Katherine A. Brown is visiting assistant professor of French at Skidmore College.

The Tortured Life of Scofield Thayer James Dempsey “For nearly a century, Scofield Thayer has remained a somewhat shadowy figure in the history of modernism. But James Dempsey has at last illuminated Thayer’s passionate, intense, and agonizing story.”—Barry Ahearn, editor of The Correspondence of William Carlos Williams and Louis Zukofsky “As no other book has done before, The Tortured Life of Scofield Thayer places Thayer’s contribution to modernism as editor of The Dial in the context of his personal struggles to forge a new aesthetic and to understand his own psychology and the life of his times.”—Michael Webster, author of Reading Visual Poetry after Futurism The influential literary magazine The Dial is regarded as a titanic artistic and aesthetic achievement for having published most of the great modernist writers, artists, and critics of its day. As publisher and editor of the magazine from 1920 to 1926, Scofield Thayer was gatekeeper and guide for the movement, introducing the ideas of literary modernism to America and giving American artists a new audience in Europe. In The Tortured Life of Scofield Thayer, James Dempsey looks beyond the public figure best known for publishing the work of William Butler Yeats, T. S. Eliot, William Carlos Williams, E.E. Cummings, and Marianne Moore to reveal a paradoxical man fraught with indecisions and insatiable appetites and deeply conflicted about the artistic movement to which he was benefactor and patron. Thayer suffered from schizophrenia and faded from public life upon his resignation from The Dial. Because of his mental illness and controversial life, his guardians refused to allow anything of a personal nature to appear in previous biographies. The story of Thayer’s unmoored and peripatetic life, which in many ways mirrored the cosmopolitan rootlessness of modernism, has never been fully told until now. James Dempsey, instructor at the Worcester Polytechnic Institute, is the author of The Court Poetry of Chaucer and Zakary’s Zombies. 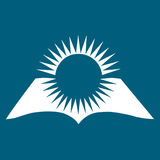