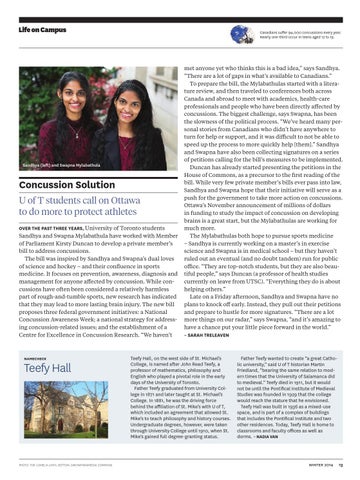 Concussion Solution U of T students call on Ottawa to do more to protect athletes OVER THE PAST THREE YEARS, University of Toronto students

Sandhya and Swapna Mylabathula have worked with Member of Parliament Kirsty Duncan to develop a private member’s bill to address concussions. The bill was inspired by Sandhya and Swapna’s dual loves of science and hockey – and their confluence in sports medicine. It focuses on prevention, awareness, diagnosis and management for anyone affected by concussion. While concussions have often been considered a relatively harmless part of rough-and-tumble sports, new research has indicated that they may lead to more lasting brain injury. The new bill proposes three federal government initiatives: a National Concussion Awareness Week; a national strategy for addressing concussion-related issues; and the establishment of a Centre for Excellence in Concussion Research. “We haven’t

met anyone yet who thinks this is a bad idea,” says Sandhya. TK TK TK “There are a lot of gaps in what’s available to Canadians.” To prepare the bill, the Mylabathulas started with a literature review, and then traveled to conferences both across Canada and abroad to meet with academics, health-care professionals and people who have been directly affected by concussions. The biggest challenge, says Swapna, has been the slowness of the political process. “We’ve heard many personal stories from Canadians who didn’t have anywhere to turn for help or support, and it was difficult to not be able to speed up the process to more quickly help [them].” Sandhya and Swapna have also been collecting signatures on a series of petitions calling for the bill’s measures to be implemented. Duncan has already started presenting the petitions in the House of Commons, as a precursor to the first reading of the bill. While very few private member’s bills ever pass into law, Sandhya and Swapna hope that their initiative will serve as a push for the government to take more action on concussions. Ottawa’s November announcement of millions of dollars in funding to study the impact of concussion on developing brains is a great start, but the Mylabathulas are working for much more. The Mylabathulas both hope to pursue sports medicine – Sandhya is currently working on a master’s in exercise science and Swapna is in medical school – but they haven’t ruled out an eventual (and no doubt tandem) run for public office. “They are top-notch students, but they are also beautiful people,” says Duncan (a professor of health studies currently on leave from UTSC). “Everything they do is about helping others.” Late on a Friday afternoon, Sandhya and Swapna have no plans to knock off early. Instead, they pull out their petitions and prepare to hustle for more signatures. “There are a lot more things on our radar,” says Swapna, “and it’s amazing to have a chance put your little piece forward in the world.” – SARAH TRELEAVEN

Teefy Hall, on the west side of St. Michael’s College, is named after John Read Teefy, a professor of mathematics, philosophy and English who played a pivotal role in the early days of the University of Toronto. Father Teefy graduated from University College in 1871 and later taught at St. Michael’s College. In 1881, he was the driving force behind the affiliation of St. Mike’s with U of T, which included an agreement that allowed St. Mike’s to teach philosophy and history courses. Undergraduate degrees, however, were taken through University College until 1910, when St. Mike’s gained full degree-granting status.

Father Teefy wanted to create “a great Catholic university,” said U of T historian Martin Friedland, “bearing the same relation to modern times that the University of Salamanca did to medieval.” Teefy died in 1911, but it would not be until the Pontifical Institute of Medieval Studies was founded in 1929 that the college would reach the stature that he envisioned. Teefy Hall was built in 1936 as a mixed-use space, and is part of a complex of buildings that includes the Pontifical Institute and two other residences. Today, Teefy Hall is home to classrooms and faculty offices as well as dorms. – NADIA VAN 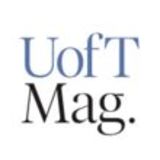 Feature stories on new U of T president Meric Gertler, massive open online courses (MOOCs), and a professor who is aiming to reduce malnutri...

Feature stories on new U of T president Meric Gertler, massive open online courses (MOOCs), and a professor who is aiming to reduce malnutri...