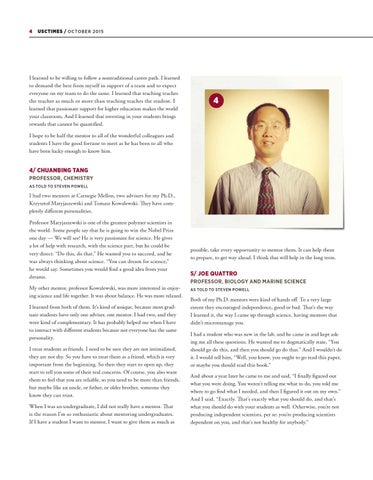 I hope to be half the mentor to all of the wonderful colleagues and students I have the good fortune to meet as he has been to all who have been lucky enough to know him.

I had two mentors at Carnegie Mellon, two advisers for my Ph.D., Krzysztof Matyjaszewski and Tomasz Kowalewski. They have completely different personalities. Professor Matyjaszewski is one of the greatest polymer scientists in the world. Some people say that he is going to win the Nobel Prize one day — We will see! He is very passionate for science. He gives a lot of help with research, with the science part, but he could be very direct: “Do this, do that.” He wanted you to succeed, and he was always thinking about science. “You can dream for science,” he would say. Sometimes you would find a good idea from your dreams. My other mentor, professor Kowalewski, was more interested in enjoying science and life together. It was about balance. He was more relaxed. I learned from both of them. It’s kind of unique, because most graduate students have only one adviser, one mentor. I had two, and they were kind of complementary. It has probably helped me when I have to interact with different students because not everyone has the same personality. I treat students as friends. I need to be sure they are not intimidated, they are not shy. So you have to treat them as a friend, which is very important from the beginning. So then they start to open up, they start to tell you some of their real concerns. Of course, you also want them to feel that you are reliable, so you need to be more than friends, but maybe like an uncle, or father, or older brother, someone they know they can trust. When I was an undergraduate, I did not really have a mentor. That is the reason I’m so enthusiastic about mentoring undergraduates. If I have a student I want to mentor, I want to give them as much as

possible, take every opportunity to mentor them. It can help them to prepare, to get way ahead. I think that will help in the long term.

Both of my Ph.D. mentors were kind of hands off. To a very large extent they encouraged independence, good or bad. That’s the way I learned it, the way I came up through science, having mentors that didn’t micromanage you. I had a student who was new in the lab, and he came in and kept asking me all these questions. He wanted me to dogmatically state, “You should go do this, and then you should go do that.” And I wouldn’t do it. I would tell him, “Well, you know, you ought to go read this paper, or maybe you should read this book.” And about a year later he came to me and said, “I finally figured out what you were doing. You weren’t telling me what to do, you told me where to go find what I needed, and then I figured it out on my own.” And I said, “Exactly. That’s exactly what you should do, and that’s what you should do with your students as well. Otherwise, you’re not producing independent scientists, per se; you’re producing scientists dependent on you, and that’s not healthy for anybody.” 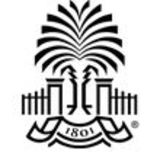 Ever walked in someone else’s footsteps? Ever showed someone else the way? Mentorship is a two-way street. It’s also the subject of the Octo...

Ever walked in someone else’s footsteps? Ever showed someone else the way? Mentorship is a two-way street. It’s also the subject of the Octo...