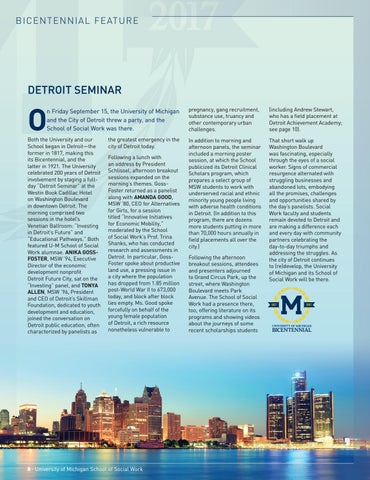 n Friday September 15, the University of Michigan and the City of Detroit threw a party, and the School of Social Work was there.

Both the University and our School began in Detroit—the former in 1817, making this its Bicentennial, and the latter in 1921. The University celebrated 200 years of Detroit involvement by staging a fullday “Detroit Seminar” at the Westin Book Cadillac Hotel on Washington Boulevard in downtown Detroit. The morning comprised two sessions in the hotel’s Venetian Ballroom: “Investing in Detroit’s Future” and “Educational Pathways.” Both featured U-M School of Social Work alumnae. ANIKA GOSSFOSTER, MSW ’94, Executive Director of the economic development nonprofit Detroit Future City, sat on the “Investing” panel, and TONYA ALLEN, MSW ’96, President and CEO of Detroit’s Skillman Foundation, dedicated to youth development and education, joined the conversation on Detroit public education, often characterized by panelists as

the greatest emergency in the city of Detroit today. Following a lunch with an address by President Schlissel, afternoon breakout sessions expanded on the morning’s themes. GossFoster returned as a panelist along with AMANDA GOOD, MSW ’80, CEO for Alternatives for Girls, for a session titled “Innovative Initiatives for Economic Mobility,” moderated by the School of Social Work’s Prof. Trina Shanks, who has conducted research and assessments in Detroit. In particular, GossFoster spoke about productive land use, a pressing issue in a city where the population has dropped from 1.85 million post-World War II to 673,000 today, and block after block lies empty. Ms. Good spoke forcefully on behalf of the young female population of Detroit, a rich resource nonetheless vulnerable to

(including Andrew Stewart, who has a field placement at Detroit Achievement Academy; see page 10).

In addition to morning and afternoon panels, the seminar included a morning poster session, at which the School publicized its Detroit Clinical Scholars program, which prepares a select group of MSW students to work with underserved racial and ethnic minority young people living with adverse health conditions in Detroit. (In addition to this program, there are dozens more students putting in more than 70,000 hours annually in field placements all over the city.)

That short walk up Washington Boulevard was fascinating, especially through the eyes of a social worker. Signs of commercial resurgence alternated with struggling businesses and abandoned lots, embodying all the promises, challenges and opportunities shared by the day’s panelists. Social Work faculty and students remain devoted to Detroit and are making a difference each and every day with community partners celebrating the day-to-day triumphs and addressing the struggles. As the city of Detroit continues to (re)develop, the University of Michigan and its School of Social Work will be there.

Following the afternoon breakout sessions, attendees and presenters adjourned to Grand Circus Park, up the street, where Washington Boulevard meets Park Avenue. The School of Social Work had a presence there, too, offering literature on its programs and showing videos about the journeys of some recent scholarships students 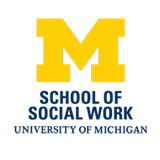 Published biannually by the University of Michigan School of Social Work.

Published biannually by the University of Michigan School of Social Work.