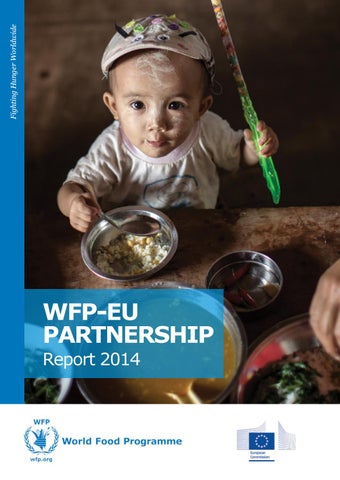 Hunger can be eliminated in our lifetimes

FOREWORD The European Union (EU) and UN World Food Programme (WFP) have made working together a priority to tackle food insecurity and malnutrition worldwide. This partnership has been and remains vital to WFP’s fight for a Zero Hunger world. In 2014, WFP reached 80 million hungry people in 82 countries, as worldwide catastrophes rose to a record high; from the aftermath of Typhoon Haiyan in the Philippines, to the devastating Ebola epidemic in West Africa, to the conflicts in the Middle East, most notably Iraq and Syria. With more than €1.1 billion in support from the EU (25 percent from the European Commission and 75 percent from Member States), WFP was able to address these colossal challenges, providing food assistance to millions of people in 40 countries.

neighbouring countries with the ability to choose the right foods for their families and ensure local economies and shop-owners could continue to thrive. To showcase the strong EU support for families in need worldwide, the end of 2014 also saw the launch of the joint WFP-EU Family Meal campaign: “What brings us together?” Renowned photographer Chris Terry was sent on a journey to five different countries to capture how EU-funded WFP assistance is making a difference in people’s lives and how the importance of a family meal is enjoyed globally.

The EU is one of the world’s major donors for food assistance in crises and through a growing partnership, the EU and WFP have become leaders in innovation for sustainable solutions in fighting hunger worldwide.

Addressing the Syria crisis, more than €120 million from the EU and Member States helped WFP reach as many as 4.9 million people inside the country and another million forced to flee into neighbouring countries. Additionally, innovative cash and e-voucher programmes were vital to providing individuals and families in

The 2014 Ebola epidemic in West Africa was the largest of its kind in history, severely affecting livelihoods in Guinea, Liberia and Sierra Leone. By supporting Logistics operations and the UN Humanitarian Air Service (UNHAS), managed by WFP, EU support went beyond food assistance. The logistical network set up by WFP allowed the humanitarian community to access affected communities in remote areas and create infrastructure for other humanitarian agencies to work more quickly and effectively.

Modalities: WFP adapts the modality of food assistance depending on the context of the humanitarian or development situation. Ensuring no harm is done to local economies or smallholder farmers while providing the most effective assistance possible, the EU supports multiple WFP solutions including cash and vouchers and direct food distributions.

LEVEL 3 EMERGENCIES As the war in Syria entered its fourth year, the needs continued to grow, both inside and outside the country. More than 7 million Syrians (4.25 million inside the country and 2.9 million in neighbouring countries) were in urgent need of food assistance in 2014. Despite hindered humanitarian access, WFP, supported by the EU, managed to reach 4.9 million of these vulnerable Syrians. Innovative e-voucher programmes additionally helped alleviate some pressure put on neighbouring states experiencing heavy influxes of refugees by creating jobs and invigorating the local economies.

WFP/Chris Terry, supported by the EU

The worldâ&amp;#x20AC;&amp;#x2122;s youngest country broke into civil war in December 2013, forcing 1.4 million people inside the country to flee their homes and nearly half a million people to cross into neighbouring countries. In addition to fighting along supply routes hindering humanitarian access to vulnerable groups of South Sudanese, the conflict risked reversing the progress in food security the region had made before. More than â&amp;#x201A;Ź107.5 million in EU donor support was essential in ensuring 2.5 million people were reached by WFP with food, nutrition and livelihood assistance.

Even before the conflict in Central African Republic began in 2012, the food security situation in the country was dire. By 2014, 800,000 were displaced, while 35 percent of the entire population was in urgent need of food assistance and 90 percent said they lived on only one meal a day. With difficulties in both access and safety, the crisis became one of the main challenges facing humanitarian and international communities. EU support helped tackle these challenges and was especially generous in funding for the UN humanitarian air service (UNHAS). This support significantly increased geographical coverage of WFP assistance and the number of beneficiaries reached. Additionally, â&amp;#x201A;Ź1.3 million from the EU supported WFP efforts to reach refugees who had crossed into Cameroon, often traveling for weeks through the forest to reach safety.

As fighting broke out and spread from Mosul to other cities and governorates of Iraq in the summer of 2014, nearly two million people became displaced, quadrupling the number of internally displaced persons (IDPs) and refugees in the country. WFP reached over 1.4 million Iraqis with food assistance in the second half of the year with successful distributions finally reaching across all 18 governorates thanks to EU and Member State support.

“2014 experienced new, sad peaks of global humanitarian needs. I have seen the heartbreaking suffering of vulnerable people, especially children, caught up in conflict and natural disaster. But I have also witnessed the very concrete difference that the strong EU-WFP partnership is making every day in saving lives and bringing hope, made possible thanks to the generosity of EU tax payers. It is genuine European solidarity in action.“ 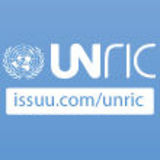