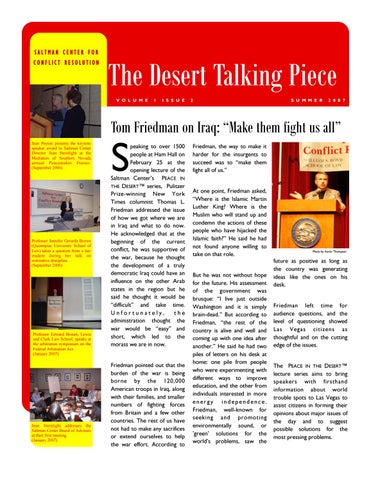 Professor Jennifer Gerarda Brown (Quinnipiac University School of Law) takes a question from a law student during her talk on restorative discipline. (September 2006)

Jean Sternlight addresses the Saltman Center Board of Advisors at their first meeting. (January 2007)

peaking to over 1500 people at Ham Hall on February 25 at the opening lecture of the Saltman Center’s PEACE IN THE DESERT™ series, Pulitzer Prize-winning New York Times columnist Thomas L. Friedman addressed the issue of how we got where we are in Iraq and what to do now. He acknowledged that at the beginning of the current conflict, he was supportive of the war, because he thought the development of a truly democratic Iraq could have an influence on the other Arab states in the region but he said he thought it would be “difficult” and take time. Unfortunately, the administration thought the war would be “easy” and short, which led to the morass we are in now. Friedman pointed out that the burden of the war is being borne by the 120,000 American troops in Iraq, along with their families, and smaller numbers of fighting forces from Britain and a few other countries. The rest of us have not had to make any sacrifices or extend ourselves to help the war effort. According to

Friedman, the way to make it harder for the insurgents to succeed was to “make them fight all of us.” At one point, Friedman asked, “Where is the Islamic Martin Luther King? Where is the Muslim who will stand up and condemn the actions of these people who have hijacked the Islamic faith?” He said he had not found anyone willing to take on that role. But he was not without hope for the future. His assessment of the government was brusque: “I live just outside Washington and it is simply brain-dead.” But according to Friedman, “the rest of the country is alive and well and coming up with one idea after another.” He said he had two piles of letters on his desk at home: one pile from people who were experimenting with different ways to improve education, and the other from individuals interested in more energy independence. Friedman, well-known for seeking and promoting environmentally sound, or ’green’ solutions for the world’s problems, saw the

future as positive as long as the country was generating ideas like the ones on his desk. Friedman left time for audience questions, and the level of questioning showed Las Vegas citizens as thoughtful and on the cutting edge of the issues. The PEACE IN THE DESERT™ lecture series aims to bring speakers with firsthand information about world trouble spots to Las Vegas to assist citizens in forming their opinions about major issues of the day and to suggest possible solutions for the most pressing problems.

Methodist University’s Dedman School of Law in Dallas, Texas. But Canada’s University of Victoria Faculty of Law placed first, so the Boyd team had the honor of representing the United States at the international competition in Sydney during the week of April 9. This year’s competition involved the area of family law. For the preliminary rounds this year at the regional competition, teams were given fact patterns concerning some topics in that area of law (the ‘problem’) about ten days before the

competition. Judges and ‘clients’ are given a far more extensive problem version with confidential information. The task of the client counseling team is to interview the client, determine what legal issues the client has, and discuss fee arrangements. Teams that make the final rounds have very little time to prepare, since they receive the final problem only a short time before the round begins. Boyd actually sent two teams to the regional competition held here in February. The other team, composed of Paula

Gregory and John Courtney, placed third. It is a major achievement for one school to have two teams in the top three places in a competition, and the Boyd community is enormously proud of Beth, Jenny, Paula and John. Many thanks to all the other faculty members who volunteered their time and expertise to help prepare the teams. In 2005, Boyd students Lisa McClane and Jay Odum took first place in the national competition held in California. Last year the team of Stacey Perez-Roe and Jerrold Creed took third place at the national Client Counseling Competition in Chicago.

Saltman Happenings September 21, 2007 Associate Professor Scott R. Peppet, University of Colorado Law School, will speak on “The Ethics of Collaborative Law.” Tired of the adversarial practice of law, collaborative law practitioners seek to facilitate a fair and reasonable resolution of disputes by, among other means, agreeing not to mislead each other during negotiations and not to represent their client in any litigation should the complaint proceed to trial. Peppet’s talk could not be more current, since this past February the Ethics Committee of the Colorado Bar Association declared the practice of collaborative law unethical per se. October 12, 2007 A Conference on Collaboration and the Colorado River—Continuing the theme of collaboration, Saltman Center Director Jean Sternlight, along with Boyd professors of environmental and water law Bret Birdsong and Douglas Grant have put together a full-day conference of theoreticians and practitioners who deal with water and land resource problems arising on and along the Colorado River. Pat Mulroy, General Manager of the Southern Nevada Water Authority, is scheduled to give the luncheon keynote address.

December 6, 2007 Dennis Ross, former director of policy planning for President George H.W. Bush and special Middle East envoy for President Bill Clinton, will speak as part of the PEACE IN THE DESERT™ lecture series. Ross, who recently published “Statecraft: And How to Restore America’s Standing in the World,” plans to talk about the principles of statecraft that he details in his book and their application to a current conflict situation. He has also written “The Missing Peace: The Inside Story of the Fight for Middle East Peace.” February 19, 2008 Professor Susan Sturm, Columbia University Law School, will lecture on “Conflict Resolution and Systemic Change.” Sturm challenges traditional critics of ADR by asserting that processes like mediation can elaborate public values and support public accountability. March 26, 2008 Professor Mark Drumbl, Washington & Lee School of Law, will talk on “Mass Atrocity and Traditional Dispute Resolution: The Rwandan and Ugandan Experiences.” His latest book, “Atrocity, Punishment and International Law,” takes issue with the idea that traditional litigation is the best way to deal with mass atrocities.

Ponder this… “Few people are capable of expressing with equanimity opinions which differ from the prejudices of their social environment. Most people are even incapable of forming such opinions.” —Albert Einstein

Peter Reilly, SCCR’s Negotiation Training Director, believes that anyone can be taught to negotiate better, and that anyone can learn to recognize more negotiation opportunities. In fact, in his own life Peter negotiates for things whose price most people would consider fixed: the price of his suits, for example, show tickets and CD players! Reilly has worked with individuals and organizations from Las Vegas, and throughout the country, on how to achieve maximum results in any kind of negotiation. The training sessions last from 45 minutes to several days in length, depending on client needs. Peter has worked with a wide variety of organizations, both public and private, including groups of doctors, lawyers, businesspeople, government officials, and public and nonprofit leaders. Several clients have been women’s groups whose members believe becoming stronger negotiators is imperative to excelling in today’s highly competitive work environment. Representative

By combining traditional lectu res with simu lated negotiation exercises, role plays, and other group exercises, participants can learn from Reilly as well as from each other. The information is powerful, fun to learn, and immediately useful in all aspects of life, both personal and professional. As one participant noted on his program evaluation form, “Tremendous for me both as an attorney and as an ecclesiastic leader. Not bad information for me as a spouse and father as well.” Specializing in developing customized trainings, Peter can work with an organization to quickly pinpoint the kind of negotiations in which members tend to be involved, as well as the types of barriers currently preventing the achievement of favorable agreements. Specific materials, role plays and exercises can be selected in order to teach and “drill” the competencies and skills most relevant in addressing problems faced by a particular organization or industry. For anyone interested in seeing how Reilly conducts a training, he will present “Negotiation: The Essence of Winning in Business” for the Las Vegas Chamber of Commerce’s Business Education Series on Wednesday, October 10, 2007,

from 7:00 to 9:00 a.m.. This event is open to the general public; please contact the Chamber regarding cost and location.

Participants preparing for a negotiation exercise.

To learn more about upcoming SCCR trainings, go to http:// www.law.unlv.edu/ saltman.html. If you would like to schedule training for your group or organization, contact Professor Reilly directly at (702) 895-2675 or at Peter.Reilly@UNLV.edu. 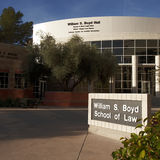 Read about a recent lecture by Thomas L. Friedman as part of the Saltman Centers "Peace in the Desert" series, and see how well Boyd student...

Read about a recent lecture by Thomas L. Friedman as part of the Saltman Centers "Peace in the Desert" series, and see how well Boyd student...