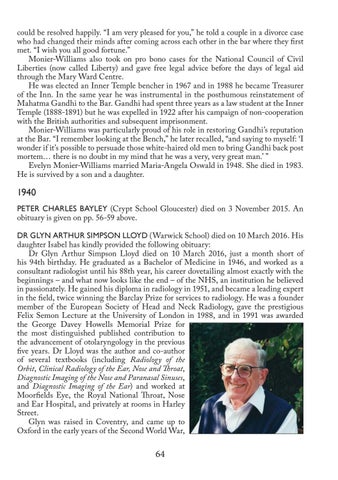 could be resolved happily. “I am very pleased for you,” he told a couple in a divorce case who had changed their minds after coming across each other in the bar where they first met. “I wish you all good fortune.” Monier-Williams also took on pro bono cases for the National Council of Civil Liberties (now called Liberty) and gave free legal advice before the days of legal aid through the Mary Ward Centre. He was elected an Inner Temple bencher in 1967 and in 1988 he became Treasurer of the Inn. In the same year he was instrumental in the posthumous reinstatement of Mahatma Gandhi to the Bar. Gandhi had spent three years as a law student at the Inner Temple (1888-1891) but he was expelled in 1922 after his campaign of non-cooperation with the British authorities and subsequent imprisonment. Monier-Williams was particularly proud of his role in restoring Gandhi’s reputation at the Bar. “I remember looking at the Bench,” he later recalled, “and saying to myself: ‘I wonder if it’s possible to persuade those white-haired old men to bring Gandhi back post mortem… there is no doubt in my mind that he was a very, very great man.’ ” Evelyn Monier-Williams married Maria-Angela Oswald in 1948. She died in 1983. He is survived by a son and a daughter.

1940 PETER CHARLES BAYLEY (Crypt School Gloucester) died on 3 November 2015. An obituary is given on pp. 56-59 above. DR GLYN ARTHUR SIMPSON LLOYD (Warwick School) died on 10 March 2016. His daughter Isabel has kindly provided the following obituary: Dr Glyn Arthur Simpson Lloyd died on 10 March 2016, just a month short of his 94th birthday. He graduated as a Bachelor of Medicine in 1946, and worked as a consultant radiologist until his 88th year, his career dovetailing almost exactly with the beginnings – and what now looks like the end – of the NHS, an institution he believed in passionately. He gained his diploma in radiology in 1951, and became a leading expert in the field, twice winning the Barclay Prize for services to radiology. He was a founder member of the European Society of Head and Neck Radiology, gave the prestigious Felix Semon Lecture at the University of London in 1988, and in 1991 was awarded the George Davey Howells Memorial Prize for the most distinguished published contribution to the advancement of otolaryngology in the previous five years. Dr Lloyd was the author and co-author of several textbooks (including Radiology of the Orbit, Clinical Radiology of the Ear, Nose and Throat, Diagnostic Imaging of the Nose and Paranasal Sinuses, and Diagnostic Imaging of the Ear) and worked at Moorfields Eye, the Royal National Throat, Nose and Ear Hospital, and privately at rooms in Harley Street. Glyn was raised in Coventry, and came up to Oxford in the early years of the Second World War,