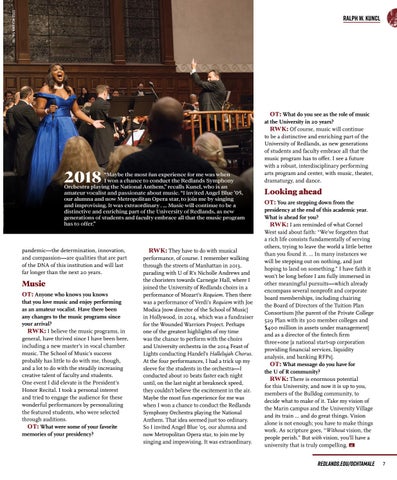 “Maybe the most fun experience for me was when I won a chance to conduct the Redlands Symphony Orchestra playing the National Anthem,” recalls Kuncl, who is an amateur vocalist and passionate about music. “I invited Angel Blue ’05, our alumna and now Metropolitan Opera star, to join me by singing and improvising. It was extraordinary . … Music will continue to be a distinctive and enriching part of the University of Redlands, as new generations of students and faculty embrace all that the music program has to offer.”

pandemic—the determination, innovation, and compassion—are qualities that are part of the DNA of this institution and will last far longer than the next 20 years.

Music OT: Anyone who knows you knows that you love music and enjoy performing as an amateur vocalist. Have there been any changes to the music programs since your arrival? RWK: I believe the music programs, in general, have thrived since I have been here, including a new master’s in vocal chamber music. The School of Music’s success probably has little to do with me, though, and a lot to do with the steadily increasing creative talent of faculty and students. One event I did elevate is the President’s Honor Recital. I took a personal interest and tried to engage the audience for these wonderful performances by personalizing the featured students, who were selected through auditions. OT: What were some of your favorite memories of your presidency?

RWK: They have to do with musical performance, of course. I remember walking through the streets of Manhattan in 2013, parading with U of R’s Nicholle Andrews and the choristers towards Carnegie Hall, where I joined the University of Redlands choirs in a performance of Mozart’s Requiem. Then there was a performance of Verdi’s Requiem with Joe Modica [now director of the School of Music] in Hollywood, in 2014, which was a fundraiser for the Wounded Warriors Project. Perhaps one of the greatest highlights of my time was the chance to perform with the choirs and University orchestra in the 2014 Feast of Lights conducting Handel’s Hallelujah Chorus. At the four performances, I had a trick up my sleeve for the students in the orchestra—I conducted about 10 beats faster each night until, on the last night at breakneck speed, they couldn’t believe the excitement in the air. Maybe the most fun experience for me was when I won a chance to conduct the Redlands Symphony Orchestra playing the National Anthem. That idea seemed just too ordinary. So I invited Angel Blue ’05, our alumna and now Metropolitan Opera star, to join me by singing and improvising. It was extraordinary.

OT: What do you see as the role of music at the University in 20 years? RWK: Of course, music will continue to be a distinctive and enriching part of the University of Redlands, as new generations of students and faculty embrace all that the music program has to offer. I see a future with a robust, interdisciplinary performing arts program and center, with music, theater, dramaturgy, and dance.

Looking ahead OT: You are stepping down from the presidency at the end of this academic year. What is ahead for you? RWK: I am reminded of what Cornel West said about faith: “We’ve forgotten that a rich life consists fundamentally of serving others, trying to leave the world a little better than you found it. … In many instances we will be stepping out on nothing, and just hoping to land on something.” I have faith it won’t be long before I am fully immersed in other meaningful pursuits—which already encompass several nonprofit and corporate board memberships, including chairing the Board of Directors of the Tuition Plan Consortium [the parent of the Private College 529 Plan with its 300 member colleges and $400 million in assets under management] and as a director of the fintech firm three+one [a national start-up corporation providing financial services, liquidity analysis, and banking RFPs]. OT: What message do you have for the U of R community? RWK: There is enormous potential for this University, and now it is up to you, members of the Bulldog community, to decide what to make of it. Take my vision of the Marin campus and the University Village and its train … and do great things. Vision alone is not enough; you have to make things work. As scripture goes, “Without vision, the people perish.” But with vision, you’ll have a university that is truly compelling. OT