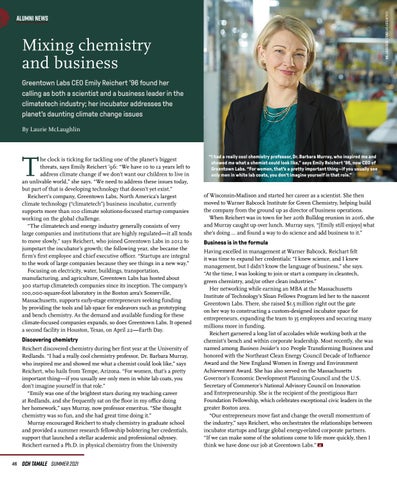 Mixing chemistry and business Greentown Labs CEO Emily Reichert ’96 found her calling as both a scientist and a business leader in the climatetech industry; her incubator addresses the planet’s daunting climate change issues By Laurie McLaughlin

he clock is ticking for tackling one of the planet’s biggest threats, says Emily Reichert ’96: “We have 10 to 12 years left to address climate change if we don’t want our children to live in an unlivable world,” she says. “We need to address these issues today, but part of that is developing technology that doesn’t yet exist.” Reichert’s company, Greentown Labs, North America’s largest climate technology (“climatetech”) business incubator, currently supports more than 100 climate solutions-focused startup companies working on the global challenge. “The climatetech and energy industry generally consists of very large companies and institutions that are highly regulated—it all tends to move slowly,” says Reichert, who joined Greentown Labs in 2012 to jumpstart the incubator’s growth; the following year, she became the firm’s first employee and chief executive officer. “Startups are integral to the work of large companies because they see things in a new way.” Focusing on electricity, water, buildings, transportation, manufacturing, and agriculture, Greentown Labs has hosted about 300 startup climatetech companies since its inception. The company’s 100,000-square-foot laboratory in the Boston area’s Somerville, Massachusetts, supports early-stage entrepreneurs seeking funding by providing the tools and lab space for endeavors such as prototyping and bench chemistry. As the demand and available funding for these climate-focused companies expands, so does Greentown Labs. It opened a second facility in Houston, Texas, on April 22—Earth Day.

Discovering chemistry Reichert discovered chemistry during her first year at the University of Redlands. “I had a really cool chemistry professor, Dr. Barbara Murray, who inspired me and showed me what a chemist could look like,” says Reichert, who hails from Tempe, Arizona. “For women, that’s a pretty important thing—if you usually see only men in white lab coats, you don’t imagine yourself in that role.” “Emily was one of the brightest stars during my teaching career at Redlands, and she frequently sat on the floor in my office doing her homework,” says Murray, now professor emeritus. “She thought chemistry was so fun, and she had great time doing it.” Murray encouraged Reichert to study chemistry in graduate school and provided a summer research fellowship bolstering her credentials, support that launched a stellar academic and professional odyssey. Reichert earned a Ph.D. in physical chemistry from the University 46

“ I had a really cool chemistry professor, Dr. Barbara Murray, who inspired me and showed me what a chemist could look like,” says Emily Reichert ’96, now CEO of Greentown Labs. “For women, that’s a pretty important thing—if you usually see only men in white lab coats, you don’t imagine yourself in that role.”

of Wisconsin-Madison and started her career as a scientist. She then moved to Warner Babcock Institute for Green Chemistry, helping build the company from the ground up as director of business operations. When Reichert was in town for her 20th Bulldog reunion in 2016, she and Murray caught up over lunch. Murray says, “[Emily still enjoys] what she’s doing … and found a way to do science and add business to it.”

Business is in the formula Having excelled in management at Warner Babcock, Reichart felt it was time to expand her credentials: “I knew science, and I knew management, but I didn’t know the language of business,” she says. “At the time, I was looking to join or start a company in cleantech, green chemistry, and/or other clean industries.” Her networking while earning an MBA at the Massachusetts Institute of Technology’s Sloan Fellows Program led her to the nascent Greentown Labs. There, she raised $1.5 million right out the gate on her way to constructing a custom-designed incubator space for entrepreneurs, expanding the team to 35 employees and securing many millions more in funding. Reichert garnered a long list of accolades while working both at the chemist’s bench and within corporate leadership. Most recently, she was named among Business Insider’s 100 People Transforming Business and honored with the Northeast Clean Energy Council Decade of Influence Award and the New England Women in Energy and Environment Achievement Award. She has also served on the Massachusetts Governor’s Economic Development Planning Council and the U.S. Secretary of Commerce’s National Advisory Council on Innovation and Entrepreneurship. She is the recipient of the prestigious Barr Foundation Fellowship, which celebrates exceptional civic leaders in the greater Boston area. “Our entrepreneurs move fast and change the overall momentum of the industry,” says Reichert, who orchestrates the relationships between incubator startups and large global energy-related corporate partners. “If we can make some of the solutions come to life more quickly, then I think we have done our job at Greentown Labs.” OT