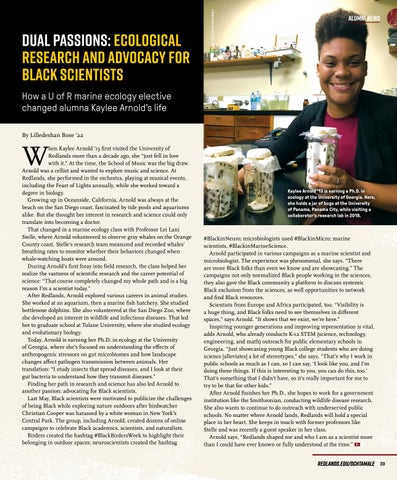 hen Kaylee Arnold ’13 first visited the University of Redlands more than a decade ago, she “just fell in love with it.” At the time, the School of Music was the big draw. Arnold was a cellist and wanted to explore music and science. At Redlands, she performed in the orchestra, playing at musical events, including the Feast of Lights annually, while she worked toward a degree in biology. Growing up in Oceanside, California, Arnold was always at the beach on the San Diego coast, fascinated by tide pools and aquariums alike. But she thought her interest in research and science could only translate into becoming a doctor. That changed in a marine ecology class with Professor Lei Lani Stelle, where Arnold volunteered to observe gray whales on the Orange County coast. Stelle’s research team measured and recorded whales’ breathing rates to monitor whether their behaviors changed when whale-watching boats were around. During Arnold’s first foray into field research, the class helped her realize the vastness of scientific research and the career potential of science: “That course completely changed my whole path and is a big reason I’m a scientist today.” After Redlands, Arnold explored various careers in animal studies. She worked at an aquarium, then a marine fish hatchery. She studied bottlenose dolphins. She also volunteered at the San Diego Zoo, where she developed an interest in wildlife and infectious diseases. That led her to graduate school at Tulane University, where she studied ecology and evolutionary biology. Today, Arnold is earning her Ph.D. in ecology at the University of Georgia, where she’s focused on understanding the effects of anthropogenic stressors on gut microbiomes and how landscape changes affect pathogen transmission between animals. Her translation: “I study insects that spread diseases, and I look at their gut bacteria to understand how they transmit diseases.” Finding her path in research and science has also led Arnold to another passion: advocating for Black scientists. Last May, Black scientists were motivated to publicize the challenges of being Black while exploring nature outdoors after birdwatcher Christian Cooper was harassed by a white woman in New York’s Central Park. The group, including Arnold, created dozens of online campaigns to celebrate Black academics, scientists, and naturalists. Birders created the hashtag #BlackBirdersWeek to highlight their belonging in outdoor spaces; neuroscientists created the hashtag

#BlackinNeuro; microbiologists used #BlackinMicro; marine scientists, #BlackinMarineScience. Arnold participated in various campaigns as a marine scientist and microbiologist. The experience was phenomenal, she says. “There are more Black folks than even we know and are showcasing.” The campaigns not only normalized Black people working in the sciences, they also gave the Black community a platform to discuss systemic Black exclusion from the sciences, as well opportunities to network and find Black resources. Scientists from Europe and Africa participated, too. “Visibility is a huge thing, and Black folks need to see themselves in different spaces,” says Arnold. “It shows that we exist, we’re here.” Inspiring younger generations and improving representation is vital, adds Arnold, who already conducts K-12 STEM (science, technology, engineering, and math) outreach for public elementary schools in Georgia. “Just showcasing young Black college students who are doing science [alleviates] a lot of stereotypes,” she says. “That’s why I work in public schools as much as I can, so I can say, ‘I look like you, and I’m doing these things. If this is interesting to you, you can do this, too.’ That’s something that I didn’t have, so it’s really important for me to try to be that for other kids.” After Arnold finishes her Ph.D., she hopes to work for a government institution like the Smithsonian, conducting wildlife disease research. She also wants to continue to do outreach with underserved public schools. No matter where Arnold lands, Redlands will hold a special place in her heart. She keeps in touch with former professors like Stelle and was recently a guest speaker in her class. Arnold says, “Redlands shaped me and who I am as a scientist more than I could have ever known or fully understood at the time.” OT