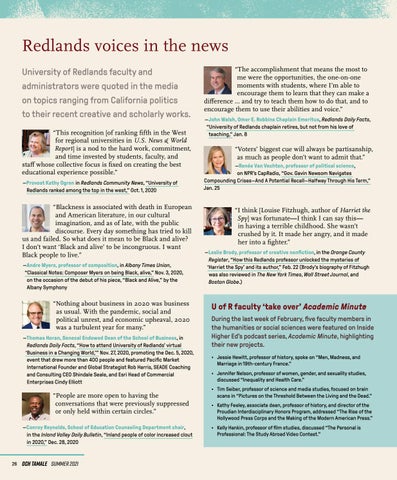 Redlands voices in the news University of Redlands faculty and administrators were quoted in the media on topics ranging from California politics to their recent creative and scholarly works. “This recognition [of ranking fifth in the West for regional universities in U.S. News &amp; World Report] is a nod to the hard work, commitment, and time invested by students, faculty, and staff whose collective focus is fixed on creating the best educational experience possible.” — Provost Kathy Ogren in Redlands Community News, “University of Redlands ranked among the top in the west,” Oct. 1, 2020

“Blackness is associated with death in European and American literature, in our cultural imagination, and as of late, with the public discourse. Every day something has tried to kill us and failed. So what does it mean to be Black and alive? I don’t want ‘Black and alive’ to be incongruous. I want Black people to live.” — Andre Myers, professor of composition, in Albany Times Union, “Classical Notes: Composer Myers on being Black, alive,” Nov. 3, 2020, on the occasion of the debut of his piece, “Black and Alive,” by the Albany Symphony

“ Nothing about business in 2020 was business as usual. With the pandemic, social and political unrest, and economic upheaval, 2020 was a turbulent year for many.” — Thomas Horan, Senecal Endowed Dean of the School of Business, in Redlands Daily Facts, “How to attend University of Redlands’ virtual ‘Business in a Changing World,’” Nov. 27, 2020, promoting the Dec. 5, 2020, event that drew more than 400 people and featured Pacific Market International Founder and Global Strategist Rob Harris, SEADE Coaching and Consulting CEO Shindale Seale, and Esri Head of Commercial Enterprises Cindy Elliott

“People are more open to having the conversations that were previously suppressed or only held within certain circles.” — Conroy Reynolds, School of Education Counseling Department chair, in the Inland Valley Daily Bulletin, “Inland people of color increased clout in 2020,” Dec. 28, 2020

“The accomplishment that means the most to me were the opportunities, the one-on-one moments with students, where I’m able to encourage them to learn that they can make a difference … and try to teach them how to do that, and to encourage them to use their abilities and voice.” — John Walsh, Omer E. Robbins Chaplain Emeritus, Redlands Daily Facts, “University of Redlands chaplain retires, but not from his love of teaching,” Jan. 8

“Voters’ biggest cue will always be partisanship, as much as people don’t want to admit that.” —Renée Van Vechten, professor of political science, on NPR’s CapRadio, “Gov. Gavin Newsom Navigates Compounding Crises—And A Potential Recall—Halfway Through His Term,” Jan. 25

“ I think [Louise Fitzhugh, author of Harriet the Spy] was fortunate—I think I can say this— in having a terrible childhood. She wasn’t crushed by it. It made her angry, and it made her into a fighter.” — Leslie Brody, professor of creative nonfiction, in the Orange County Register, “How this Redlands professor unlocked the mysteries of ‘Harriet the Spy’ and its author,” Feb. 22 (Brody’s biography of Fitzhugh was also reviewed in The New York Times, Wall Street Journal, and Boston Globe.)

U of R faculty ‘take over’ Academic Minute During the last week of February, five faculty members in the humanities or social sciences were featured on Inside Higher Ed’s podcast series, Academic Minute, highlighting their new projects. • Jessie Hewitt, professor of history, spoke on “Men, Madness, and Marriage in 19th-century France.” • Jennifer Nelson, professor of women, gender, and sexuality studies, discussed “Inequality and Health Care.” • Tim Seiber, professor of science and media studies, focused on brain scans in “Pictures on the Threshold Between the Living and the Dead.” • Kathy Feeley, associate dean, professor of history, and director of the Proudian Interdisciplinary Honors Program, addressed “The Rise of the Hollywood Press Corps and the Making of the Modern American Press.” • Kelly Hankin, professor of film studies, discussed “The Personal is Professional: The Study Abroad Video Contest.”