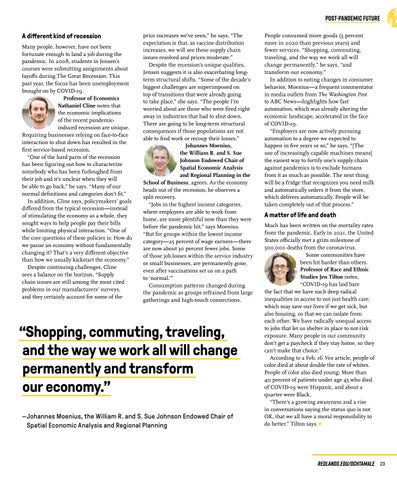 Post-pandemic future A different kind of recession Many people, however, have not been fortunate enough to land a job during the pandemic. In 2008, students in Jensen’s courses were submitting assignments about layoffs during The Great Recession. This past year, the focus has been unemployment brought on by COVID-19. Professor of Economics Nathaniel Cline notes that the economic implications of the recent pandemicinduced recession are unique. Requiring businesses relying on face-to-face interaction to shut down has resulted in the first service-based recession. “One of the hard parts of the recession has been figuring out how to characterize somebody who has been furloughed from their job and it’s unclear when they will be able to go back,” he says. “Many of our normal definitions and categories don’t fit.” In addition, Cline says, policymakers’ goals differed from the typical recession—instead of stimulating the economy as a whole, they sought ways to help people pay their bills while limiting physical interaction. “One of the core questions of these policies is: How do we pause an economy without fundamentally changing it? That’s a very different objective than how we usually kickstart the economy.” Despite continuing challenges, Cline sees a balance on the horizon. “Supply chain issues are still among the most cited problems in our manufacturers’ surveys, and they certainly account for some of the

price increases we’ve seen,” he says. “The expectation is that, as vaccine distribution increases, we will see these supply chain issues resolved and prices moderate.” Despite the recession’s unique qualities, Jensen suggests it is also exacerbating longterm structural shifts. “Some of the decade’s biggest challenges are superimposed on top of transitions that were already going to take place,” she says. “The people I’m worried about are those who were fired right away in industries that had to shut down. There are going to be long-term structural consequences if those populations are not able to find work or recoup their losses.” Johannes Moenius, the William R. and S. Sue Johnson Endowed Chair of Spatial Economic Analysis and Regional Planning in the School of Business, agrees. As the economy heads out of the recession, he observes a split recovery. “Jobs in the highest income categories, where employees are able to work from home, are more plentiful now than they were before the pandemic hit,” says Moenius. “But for groups within the lowest income category—25 percent of wage earners—there are now about 30 percent fewer jobs. Some of those job losses within the service industry or small businesses, are permanently gone, even after vaccinations set us on a path to ‘normal.’” Consumption patterns changed during the pandemic as groups refrained from large gatherings and high-touch connections.

“Shopping, commuting, traveling, and the way we work all will change permanently and transform our economy.” — Johannes Moenius, the William R. and S. Sue Johnson Endowed Chair of Spatial Economic Analysis and Regional Planning

People consumed more goods (5 percent more in 2020 than previous years) and fewer services. “Shopping, commuting, traveling, and the way we work all will change permanently,” he says, “and transform our economy.” In addition to noting changes in consumer behavior, Moenius—a frequent commentator in media outlets from The Washington Post to ABC News—highlights how fast automation, which was already altering the economic landscape, accelerated in the face of COVID-19. “Employers are now actively pursuing automation to a degree we expected to happen in five years or so,” he says. “[The use of increasingly capable machines means] the easiest way to fortify one’s supply chain against pandemics is to exclude humans from it as much as possible. The next thing will be a fridge that recognizes you need milk and automatically orders it from the store, which delivers automatically. People will be taken completely out of that process.”

A matter of life and death Much has been written on the mortality rates from the pandemic. Early in 2021, the United States officially met a grim milestone of 500,000 deaths from the coronavirus. Some communities have been hit harder than others. Professor of Race and Ethnic Studies Jen Tilton notes, “COVID-19 has laid bare the fact that we have such deep radical inequalities in access to not just health care, which may save our lives if we get sick, but also housing, so that we can isolate from each other. We have radically unequal access to jobs that let us shelter in place to not risk exposure. Many people in our community don’t get a paycheck if they stay home, so they can’t make that choice.” According to a Feb. 16 Vox article, people of color died at about double the rate of whites. People of color also died young: More than 40 percent of patients under age 45 who died of COVID-19 were Hispanic, and about a quarter were Black. “There’s a growing awareness and a rise in conversations saying the status quo is not OK, that we all have a moral responsibility to do better,” Tilton says.