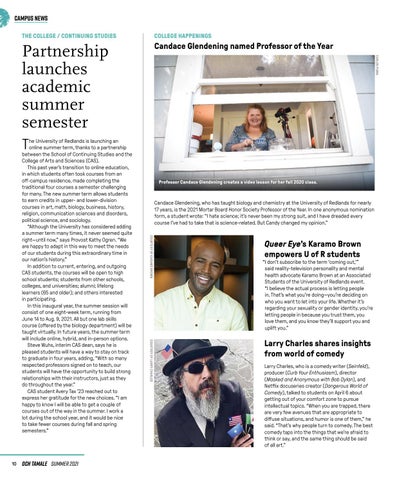 Candace Glendening, who has taught biology and chemistry at the University of Redlands for nearly 17 years, is the 2021 Mortar Board Honor Society Professor of the Year. In one anonymous nomination form, a student wrote: “I hate science; it’s never been my strong suit, and I have dreaded every course I’ve had to take that is science-related. But Candy changed my opinion.”

he University of Redlands is launching an online summer term, thanks to a partnership between the School of Continuing Studies and the College of Arts and Sciences (CAS). This past year’s transition to online education, in which students often took courses from an off-campus residence, made completing the traditional four courses a semester challenging for many. The new summer term allows students to earn credits in upper- and lower-division courses in art, math, biology, business, history, religion, communication sciences and disorders, political science, and sociology. “Although the University has considered adding a summer term many times, it never seemed quite right—until now,” says Provost Kathy Ogren. “We are happy to adapt in this way to meet the needs of our students during this extraordinary time in our nation’s history.” In addition to current, entering, and outgoing CAS students, the courses will be open to high school students; students from other schools, colleges, and universities; alumni; lifelong learners (65 and older); and others interested in participating. In this inaugural year, the summer session will consist of one eight-week term, running from June 14 to Aug. 9, 2021. All but one lab skills course (offered by the biology department) will be taught virtually. In future years, the summer term will include online, hybrid, and in-person options. Steve Wuhs, interim CAS dean, says he is pleased students will have a way to stay on track to graduate in four years, adding, “With so many respected professors signed on to teach, our students will have the opportunity to build strong relationships with their instructors, just as they do throughout the year.” CAS student Avery Tax ’23 reached out to express her gratitude for the new choices. “I am happy to know I will be able to get a couple of courses out of the way in the summer. I work a lot during the school year, and it would be nice to take fewer courses during fall and spring semesters.”

Queer Eye’s Karamo Brown empowers U of R students “ I don’t subscribe to the term ‘coming out,’” said reality-television personality and mental health advocate Karamo Brown at an Associated Students of the University of Redlands event. “I believe the actual process is letting people in. That’s what you’re doing—you’re deciding on who you want to let into your life. Whether it’s regarding your sexuality or gender identity, you’re letting people in because you trust them, you love them, and you know they’ll support you and uplift you.”

Larry Charles shares insights from world of comedy Larry Charles, who is a comedy writer (Seinfeld), producer (Curb Your Enthusiasm), director (Masked and Anonymous with Bob Dylan), and Netflix docuseries creator (Dangerous World of Comedy), talked to students on April 6 about getting out of your comfort zone to pursue intellectual topics. “When you are trapped, there are very few avenues that are appropriate to diffuse situations, and humor is one of them,” he said. “That’s why people turn to comedy. The best comedy taps into the things that we’re afraid to think or say, and the same thing should be said of all art.”