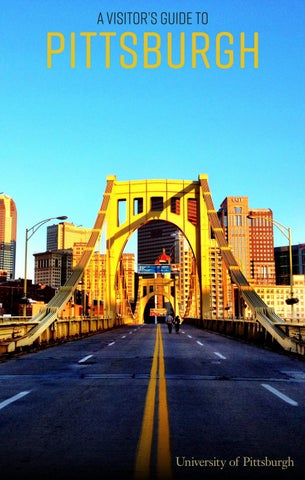 Founded in Named a staterelated institution in

Arts + Culture Museums, galleries, live performances, visual arts, and more. If you can think it, you can probably find a place in Pittsburgh to see it, learn it, or experience it.

The largest collection of Warholâ&amp;#x20AC;&amp;#x2122;s artworks and archival materials on display in his hometown.

The largest theatre in Pittsburgh specializing in new works with plays by writers at the forefront of the industry.

An opera house featuring performances for every taste, including low cost and free events year-round.

Festivals + ann Picklesburgh From pickle fanatics to the pickle curious, enjoy this multi-day event with food and music on the Roberto Clemente Bridge.

OpenStreetsPGH Free of charge and open to the public throughout the summer, bike, walk, skate, run, shop, and create through some of Pittsburgh’s most iconic streets.

Pittsburgh Marathon Participate in the full or half marathon, 5k, or other events each spring.

Each June, celebrate PittsburghPRIDE on Liberty Avenue in downtown Pittsburgh.

Food It’s impossible to list all of the great food and restaurants you can try in Pittsburgh. With new restaurants always opening, there’s no shortage of good eats in the city.

Deluca’s Diner After one visit you’ll know why this diner with classic breakfast fare usually has a line down the block.

Pamela’s Diner Get the hotcakes and the Lyonnaise potatoes at this cash-only diner.

Waffles, Incaffeinated If you have never had a savory waffle, then this is the place to try it.

Made-to-order burgers and shakes in a cool, casual atmosphere perfect for the entire family.

Gaucho Parilla Argentina Argentinian food in a casual setting (your steak craving can be satiated here at an affordable price).

Carson STreet Deli Handmade sandwiches and a taplist of some of the region’s best craft brews.

Dinner Baby Loves Tacos Some of the best tacos in all of Pittsburgh.

Butcher and the Rye Craft foods with a rustic flair and an extensive whiskey collection.

Bar Marco Handmade pasta and seasonal dishes perfect for a special night out or a casual get-together with friends.

Apteka A vegan restaurant with a central and eastern European twist.

The Twisted Frenchman For a fancier night out, enjoy multicourse French cuisine made with modern techniques.

Cure An urban Mediterranean menu based on the local farms in Western Pennsylvania.

Drink Pittsburgh knows a good drink when it sees it. The city is home to tons of breweries, juiceries, coffeehouses, and more, all designed to quench a thirst of any kind.

Family Fun There’s no shortage of fun things to do for the entire family in Pittsburgh. Kids of all ages can visit hands-on museums, enjoy thrills, and explore the city.

Children’s Museum of Pittsburgh Hands-on workshops, educational exhibits, and concert series for children of all ages.

Pennsylvania Trolley Museum Take a ride into Pittsburgh’s past with a scenic trolley ride, exhibits, tours, and more.

The Climbing Wall From beginners to those more experienced, scale indoor walls and boulders for an awesome vertical experience.

RAndyLand One of Americaâ&amp;#x20AC;&amp;#x2122;s most colorful public art landmarks, this free museum is a colorful adventure for all ages.

Duquesne Incline Kidsburgh An online resource to find all things kid- and family-related in the city.

Play Pittsburgh An online resource listing all of the fun, cheap, and free things to do in the city with family.

A historic museum, group tours, and a chance to see one of the best views of the city.

Boat Pittsburgh Rent a pontoon and cruise the city’s rivers at your leisure.

The Pittsburgh Tour Company A historic tour of Pittsburgh in a doubledecker bus that explores the best areas of the city.

Pittsburgh Party Pedaler A unique way to see the city and visit local bars and restaurants while having fun with friends.

Gateway Clipper See the best sights of the city from a river boat as it cruises through the three rivers during the day and at night.

Greater Allegheny Passage Explore this 150-mile, nearly level trail that starts (or ends, depending on your direction) at Point State Park.

ty Tours See the best views of Pittsburgh with guided tours and outdoor events held every year. Explore, learn, and experience in a variety of ways.

Stand Up Pittsburgh Paddleboard one of the city’s three rivers with an experienced instructor; perfect for families and groups.

Kayak Pittsburgh Kayak on any of the city’s three rivers alone or in a group; no experience necessary.

Pittsburgh Segway Tour the city on a Segway with an experienced guide to see the best views of Pittsburgh.

Healthy Ride Rent a bicycle for 30 or 60 minutes to explore the city and get some fresh air.

An outdoor ice rink open annually during the winter, perfect for families.

OpenStreetsPgh Free of charge and open to the public throughout the summer, bike, walk, skate, run, shop, and create through some of Pittsburgh’s most iconic streets.

State Parks Hike, camp, and swim at any of Pennsylvania’s 121 state parks, with 24 located in Western Pennsylvania alone.

Sports They don’t call us the City of Champions for nothing. Cheer on your new favorite sports team or just take in the views with games and matches all year round.

Pittsburgh’s pro-soccer team whose home is the Highmark Stadium.

Pittsburgh Passion The most recognized full-contact women’s football franchise in the world.

Five-time Stanley Cup Champions. The PPG Paints Arena is the home of the Penguins and also hosts other live concerts year-round.

Five-time World Series Champions. The Pirates play at PNC Park, where some of the best views of the entire city can be found.

Pitt Athletics From football to gymnastics, from wrestling to baseball, the students at Pitt are involved in sports of all kinds. The Pitt Athletics website hosts a full schedule of upcoming games, matches, and events and an opportunity to purchase tickets and follow sports news and updates.

Concert Venue From local talent to national acts, Pittsburgh hosts all genres of music and performance year-round. Enjoy your favorite band at these venues of all sizes.

Benedum Center See the next big Broadway show, right in Pittsburgh, as well as comedy, ballet, and other theatrical performances.

Heinz Hall The year-round home to the Pittsburgh Symphony Orchestra and a host for comedy, dance, and live music of all genres.

A neighborhood bar and music venue in the heart of Pittsburghâ&amp;#x20AC;&amp;#x2122;s Bloomfield neighborhood.

As part of the Carnegie Library of Homestead, visit this historically stunning venue for music, comedy, and family entertainment.

Located 30 minutes outside of Pittsburgh in Burgettstown, this open amphitheater hosts modern and classic musicans and bands on tour.

A renowned live music venue in South Side with a nightly lineup of touring and local acts.

Petersen Events Center When the Pitt Panthers are away, other big musical acts and sports games come to play at this Oakland space.

PPG Paints Arena When not hosting the Pittsburgh Penguins, this venue serves as a go-to for concerts and family shows in downtown Pittsburgh.

Rex Theater Originally opening as a vaudeville theater in 1905, this South Side venue offers shows for a variety of music lovers.

Stage AE The second indoor/outdoor concert venue in the US with state-of-the-art lighting, acoustical systems, and an innovative reversible stage.

The Smiling Moose A restaurant, bar, and music venue all wrapped into one in South Side.

Relocation + li Looking to relocate to the beautiful city of Pittsburgh? Start your search here for the best neighborhoods, relocation guides, and transportation resources.

Next Pittsburgh - Guides for many of the cityâ&amp;#x20AC;&amp;#x2122;s neighborhoods www.nextpittsburgh.com/pittsburgh-neighborhoods-map-and-guides

HOward Hanna - A Guide to Homebuying in Pittsburgh www.howardhanna.com/communities/pittsburgh-pa

Transit App Not sure which bus to take? The Transit app utilizes Port Authorityâ&amp;#x20AC;&amp;#x2122;s TrueTime tracking system for easy navigation.

Bicycle rentals with hubs throughout the city for easy pick-up and return.

RideSharing + Taxis Lyft, Uber, and Z-Trip all run often throughout the city and its suburbs.

Google Maps offers the easiest way to find your way from Point A to Point B whether driving, biking, walking, or using public transportation.

Free + almost f You donâ&amp;#x20AC;&amp;#x2122;t have to break the bank to explore and have a good time in Pittsburgh. Check out some of the free (or almost free) things to do in the city.

Allegheny Observatory An astronomical research institution that offers observations and illustrated lectures to the public.

Cinema in the Park An annual event where famlies can enjoy movoies and take in the view of the city at night, from a variety of locations.

Heinz Memorial Chapel A nondenominational chapel given by the H.J. Heinz family to the University of Pittsburgh.

Encompasses the nine historic city parks found around Pittsburgh, featuring maps and things to do in each park.

Self-Guided Walking Tours Join the Greater Pittsburgh Arts Council in learning about the public art found in different neighborhoods around the city.

Soldiers &amp; Sailors Memorial Hall &amp; Museum The nation’s only military memorial dedicated to honoring those who have served in all branches of the military.

Ready to learn more? Check out these guides for even more guides, tips, and recommendations with everything and anything Pittsburgh has to offer.

A combination of food and drink, culture, and living that brings you the best of the ‘Burgh.

A site dedicated to showcasing the city’s one-of-a-kind beauty, featuring hotels in the area, events and festivals, and things to do.

Local Pittsburgh Bringing you the best of all things local, from restaurants and bars, to music festivals and the arts.

Whirl Magazine A lifestyle magazine that features a behindthe-scenes look at the people and places that make the city what it is.

Thrillist: best of pgh All the best food, drink, and culture of the city in one place, including the best neighborhoods to eat in and ideas for date night.

Made in PGH Articles and guides on health and fitness, innovation, and more to keep you updated on everything going on in the city.

Discover the Burgh The best sights, attractions, and restaurants in the city, plus hotels, transportation, and a moving guide.

Popular Pittsburgh Articles on living in, exploring, and enjoying the city.

Living Pittsburgh An events calendar and guides on what to do and where to go right at your fingertips.

Beaux Arts Find your new home in this guide of some of Pittsburghâ&amp;#x20AC;&amp;#x2122;s hippest neighborhoods.

Pgh Brewery Guide Craft a custom trail or use a premade trail and take a tour through all of the breweries in your neighborhood.

Future. Forged. For all.

A Visitor's Guide to Pittsburgh

Created by the University of Pittsburgh's Office of Human Resources, this visitor's guide provides recommendations and resources for all things living in and experiencing Pittsburgh.