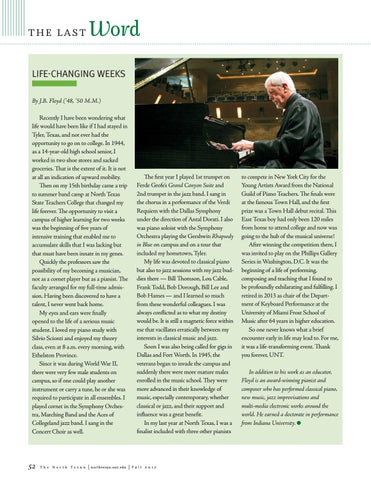 LIFE-CHANGING WEEKS By J.B. Floyd (’48, ’50 M.M.) Recently I have been wondering what life would have been like if I had stayed in Tyler, Texas, and not ever had the opportunity to go on to college. In 1944, as a 14-year-old high school senior, I worked in two shoe stores and sacked groceries. That is the extent of it. It is not at all an indication of upward mobility. Then on my 15th birthday came a trip to summer band camp at North Texas State Teachers College that changed my life forever. The opportunity to visit a campus of higher learning for two weeks was the beginning of five years of intensive training that enabled me to accumulate skills that I was lacking but that must have been innate in my genes. Quickly the professors saw the possibility of my becoming a musician, not as a cornet player but as a pianist. The faculty arranged for my full-time admission. Having been discovered to have a talent, I never went back home. My eyes and ears were finally opened to the life of a serious music student. I loved my piano study with Silvio Scionti and enjoyed my theory class, even at 8 a.m. every morning, with Ethelston Province. Since it was during World War II, there were very few male students on campus, so if one could play another instrument or carry a tune, he or she was required to participate in all ensembles. I played cornet in the Symphony Orchestra, Marching Band and the Aces of Collegeland jazz band. I sang in the Concert Choir as well.

The first year I played 1st trumpet on Ferde Grofe’s Grand Canyon Suite and 2nd trumpet in the jazz band. I sang in the chorus in a performance of the Verdi Requiem with the Dallas Symphony under the direction of Antal Dorati. I also was piano soloist with the Symphony Orchestra playing the Gershwin Rhapsody in Blue on campus and on a tour that included my hometown, Tyler. My life was devoted to classical piano but also to jazz sessions with my jazz buddies there — Bill Thomson, Lou Cable, Frank Todd, Bob Dorough, Bill Lee and Bob Hames — and I learned so much from these wonderful colleagues. I was always conflicted as to what my destiny would be. It is still a magnetic force within me that vacillates erratically between my interests in classical music and jazz. Soon I was also being called for gigs in Dallas and Fort Worth. In 1945, the veterans began to invade the campus and suddenly there were more mature males enrolled in the music school. They were more advanced in their knowledge of music, especially contemporary, whether classical or jazz, and their support and influence was a great benefit. In my last year at North Texas, I was a finalist included with three other pianists

to compete in New York City for the Young Artists Award from the National Guild of Piano Teachers. The finals were at the famous Town Hall, and the first prize was a Town Hall debut recital. This East Texas boy had only been 120 miles from home to attend college and now was going to the hub of the musical universe! After winning the competition there, I was invited to play on the Phillips Gallery Series in Washington, D.C. It was the beginning of a life of performing, composing and teaching that I found to be profoundly exhilarating and fulfilling. I retired in 2013 as chair of the Department of Keyboard Performance at the University of Miami Frost School of Music after 64 years in higher education. So one never knows what a brief encounter early in life may lead to. For me, it was a life-transforming event. Thank you forever, UNT. In addition to his work as an educator, Floyd is an award-winning pianist and composer who has performed classical piano, new music, jazz improvisations and multi-media electronic works around the world. He earned a doctorate in performance from Indiana University. 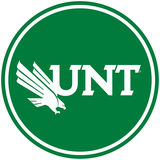