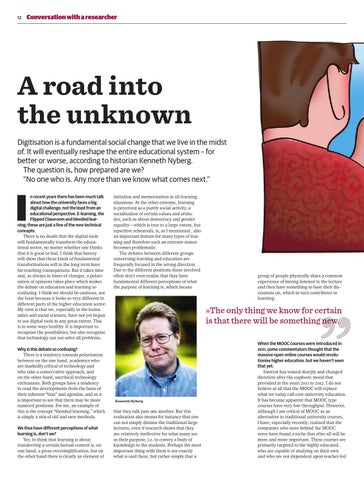 Conversation with a researcher

A road into the unknown Digitisation is a fundamental social change that we live in the midst of. It will eventually reshape the entire educational system – for ­better or worse, according to historian Kenneth Nyberg. The question is, how prepared are we? “No one who is. Any more than we know what comes next.” n recent years there has been much talk about how the university faces a big digital challenge, not the least from an educational perspective. E-learning, the Flipped Classroom and blended learning; these are just a few of the new technical concepts.

There is no doubt that the digital tools will fundamentally transform the educational sector, no matter whether one thinks that it is good or bad. I think that history will show that these kinds of fundamental transformations will in the long term have far-reaching consequences. But it takes time and, as always in times of changes, a polarisation of opinions takes place which makes the debate on education and learning so confusing. I think we should be cautious, not the least because it looks so very different in different parts of the higher education sector. My view is that we, especially in the humanities and social sciences, have not yet begun to use digital tools to any great extent. This is in some ways healthy. It is important to recognise the possibilities, but also recognise that technology can not solve all problems.

imitation and memorisation in all learning situations. At the other extreme, learning is perceived as a purely social activity, a socialisation of certain values and attitudes, such as about democracy and gender equality – which is true to a large extent, but repetitive rehearsals, is, as I mentioned , also an important feature for many types of learning and therefore such an extreme stance becomes problematic. The debates between different groups concerning learning and education are frequently focused in the wrong direction. Due to the different positions those involved often don’t even realise that they have fundamental different perceptions of what the purpose of learning is, which means

»The only thing we know for certain is that there will be something new. When the MOOC courses were introduced in 2011, some commentators thought that the massive open online courses would revolutionise higher education, but we haven’t seen that yet.

Why is this debate so confusing?

There is a tendency towards polarisation between on the one hand, academics who are markedly critical of technology and who take a conservative approach, and on the other hand, uncritical technology enthusiasts. Both groups have a tendency to read the developments from the basis of their inherent “bias” and agendas, and so it is important to see that there may be more nuanced positions. For me, an example of this is the concept “blended learning,” which is simply a mix of old and new methods. We thus have different perceptions of what learning is, don’t we?

Yes, to think that learning is about transferring a certain factual content is, on one hand, a gross oversimplification, but on the other hand there is clearly an element of

group of people physically share a common experience of having listened to the lecture and then have something to base their discussions on, which in turn contributes to learning.

that they talk past one another. But this realisation also means for instance that one can not simply dismiss the traditional large lectures, even if research shows that they are relatively ineffective for what many see as their purpose, i.e. to convey a body of knowledge to the students. Perhaps the most important thing with them is not exactly what is said there, but rather simply that a

Interest has waned sharply and changed direction after the euphoric mood that prevailed in the years 2011 to 2012. I do not believe at all that the MOOC will replace what we today call core university education. It has become apparent that MOOC type courses have very low throughput. However, although I am critical of MOOC as an alternative to traditional university courses, I have, especially recently, realised that the companies who were behind the MOOC wave have found a niche that after all will be more and more important. These courses are primarily targeted to the highly educated, who are capable of studying on their own and who are not dependent upon teacher-led The abridged version of the University of Gothenburg staff magazine, GU Journal. Issue no 5 October 2015.

The abridged version of the University of Gothenburg staff magazine, GU Journal. Issue no 5 October 2015.