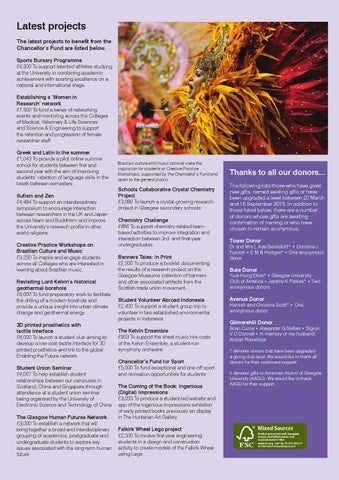 Latest projects The latest projects to benefit from the Chancellor’s Fund are listed below. Sports Bursary Programme £4,500 To support talented athletes studying at the University in combining academic achievement with sporting excellence on a national and international stage. Establishing a ‘Women in Research’ network £1,500 To fund a series of networking events and mentoring across the Colleges of Medical, Veterinary &amp; Life Sciences and Science &amp; Engineering to support the retention and progression of female researcher staff. Greek and Latin in the summer £1,043 To provide a pilot online summer school for students between first and second year with the aim of improving students’ retention of language skills in the break between semesters. Sufism and Zen £4,484 To support an interdisciplinary symposium to encourage interaction between researchers in the UK and Japan across Islam and Buddhism and improve the University’s research profile in other world religions. Creative Practice Workshops on Brazilian Culture and Music £3,250 To inspire and engage students across all Colleges who are interested in learning about Brazilian music. Revisiting Lord Kelvin’s historical geothermal borehole £6,000 To fund preparatory work to facilitate the drilling of a modern borehole and provide a unique insight into urban climate change and geothermal energy. 3D printed prosthetics with tactile interface £6,000 To launch a student club aiming to develop a low-cost tactile interface for 3D printed prosthetics and link to the global Enabling the Future network. Student Union Seminar £4,061 To help establish student relationships between our campuses in Scotland, China and Singapore through attendance at a student union seminar being organised by the University of Electronic Science and Technology of China. The Glasgow Human Futures Network £3,000 To establish a network that will bring together a broad and interdisciplinary grouping of academics, postgraduate and undergraduate students to explore key issues associated with the long-term human future.

Brazilian culture and music (above) were the inspiration for students at Creative Practice Workshops, supported by the Chancellor’s Fund and open to the general public.

Schools Collaborative Crystal Chemistry Project £3,080 To launch a crystal-growing research project in Glasgow secondary schools. Chemistry Challenge £686 To support chemistry-related teambased activities to improve integration and interaction between 3rd- and final-year undergraduates. Banners Tales: In Print £2,500 To produce a booklet documenting the results of a research project on the Glasgow Museums collection of banners and other associated artifacts from the Scottish trade union movement.

Thanks to all our donors... The following lists those who have given new gifts, named existing gifts or have been upgraded a level between 20 March and 16 September 2015. In addition to those listed below, there are a number of donors whose gifts are awaiting confirmation of naming or who have chosen to remain anonymous. Tower Donor

Chancellor’s Fund for Sport £5,000 To fund exceptional and one-off sport and recreation opportunities for students. The Coming of the Book: Ingenious (Digital) Impressions £3,033 To produce a student-led website and app of the Ingenious Impressions exhibition of early printed books previously on display in The Hunterian Art Gallery. Falkirk Wheel Lego project £2,500 To involve first-year engineering students in a design and construction activity to create models of the Falkirk Wheel using Lego.

Issue 22 of the Chancellor's Fund Newsletter from University of Glasgow (October 2015). 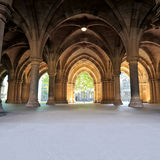