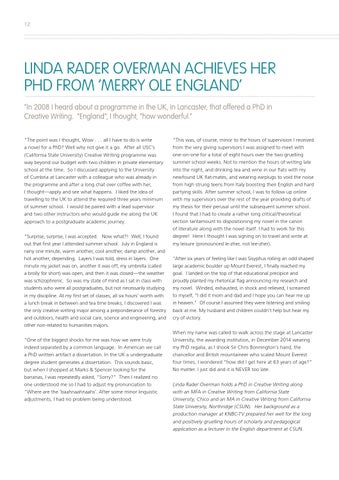 Linda Rader Overman achieves her PhD from ‘merry ole England’ “In 2008 I heard about a programme in the UK, in Lancaster, that offered a PhD in Creative Writing. “England”, I thought, “how wonderful.” “The point was I thought, Wow . . . all I have to do is write a novel for a PhD? Well why not give it a go. After all USC’s (California State University) Creative Writing programme was way beyond our budget with two children in private elementary school at the time. So I discussed applying to the University of Cumbria at Lancaster with a colleague who was already in the programme and after a long chat over coffee with her, I thought—apply and see what happens. I liked the idea of travelling to the UK to attend the required three years minimum of summer school. I would be paired with a lead supervisor and two other instructors who would guide me along the UK approach to a postgraduate academic journey. “Surprise, surprise, I was accepted. Now what?! Well, I found out that first year I attended summer school. July in England is rainy one minute, warm another, cool another, damp another, and hot another, depending. Layers I was told, dress in layers. One minute my jacket was on, another it was off, my umbrella (called a brolly for short) was open, and then it was closed—the weather was schizophrenic. So was my state of mind as I sat in class with students who were all postgraduates, but not necessarily studying in my discipline. At my first set of classes, all six hours’ worth with a lunch break in between and tea time breaks, I discovered I was the only creative writing major among a preponderance of forestry and outdoors, health and social care, science and engineering, and other non-related to humanities majors. “One of the biggest shocks for me was how we were truly indeed separated by a common language. In American we call a PhD written artifact a dissertation. In the UK a undergraduate degree student generates a dissertation. This sounds basic, but when I shopped at Marks & Spencer looking for the bananas, I was repeatedly asked, “Sorry?” Then I realized no one understood me so I had to adjust my pronunciation to “Where are the ‘baahnaahnaahs’. After some minor linguistic adjustments, I had no problem being understood.

“This was, of course, minor to the hours of supervision I received from the very giving supervisors I was assigned to meet with one-on-one for a total of eight hours over the two gruelling summer school weeks. Not to mention the hours of writing late into the night, and drinking tea and wine in our flats with my newfound UK flat-mates, and wearing earplugs to void the noise from high strung teens from Italy boosting their English and hard partying skills. After summer school, I was to follow up online with my supervisors over the rest of the year providing drafts of my thesis for their perusal until the subsequent summer school. I found that I had to create a rather long critical/theoretical section tantamount to dispositioning my novel in the canon of literature along with the novel itself. I had to work for this degree! Here I thought I was signing on to travel and write at my leisure (pronounced le-zher, not lee-zher). “After six years of feeling like I was Sisyphus rolling an odd shaped large academic boulder up Mount Everest, I finally reached my goal. I landed on the top of that educational precipice and proudly planted my rhetorical flag announcing my research and my novel. Winded, exhausted, in shock and relieved, I screamed to myself, “I did it mom and dad and I hope you can hear me up in heaven.” Of course I assumed they were listening and smiling back at me. My husband and children couldn’t help but hear my cry of victory. When my name was called to walk across the stage at Lancaster University, the awarding institution, in December 2014 wearing my PhD regalia, as I shook Sir Chris Bonnington’s hand, the chancellor and British mountaineer who scaled Mount Everest four times, I wondered “how did I get here at 63 years of age?” No matter. I just did and it is NEVER too late.