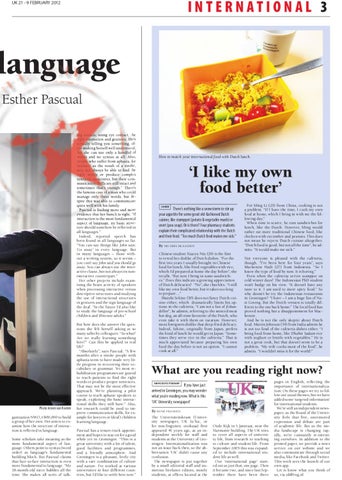 language Esther Pascual ing sounds, using eye contact, the right intonation and gestures. She’s actually telling you something, often making herself well understood, but she can use only a handful of words and no syntax at all. Also, people who suffer from aphasia, for instance as the result of a stroke, may not always be able to find the right words or produce complex syntactic structures, but their communication skills are still intact and sometimes that’s enough.” There’s the famous case of a man who could manage only three words, but despite this was able to communicate quite well with his family. Pascual is finding more and more evidence that her hunch is right. “If interaction is the most fundamental aspect of language, its basic structure should somehow be reflected in all languages.” Indeed, reported speech has been found in all languages so far. “You can say things like John says: ‘Go away’ in every language. But in many languages – those without a writing system, so it seems – you can’t say John said you should go away. You can always use the interactive clause, but not always its noninteractive counterpart.” Her other projects include examining the brain activity of speakers when processing interactive versus descriptive structures and studying the use of interactional structures in gestures and the sign language of the deaf. “In the future I’d also like to study the language of pre-school children and illiterate adults.”

Photo Jeroen van Kooten ganization NWO, €800,000 to build a group of her own. Her aim is to examine how the structure of interaction is reflected in language. Some scholars take meaning as the most fundamental aspect of language. Others point to syntax (word order) as language’s fundamental building block. But Pascual claims that face-to-face interaction is even more fundamental to language. “My 18-month-old niece babbles all the time. She makes all sorts of talk-

But how does she answer the questions she felt herself asking at so many talks by colleagues: “So what? Are we really learning something here?” Can this be applied in real life? “Absolutely”, says Pascual. “A few months after a stroke people with aphasia seem to have made very little progress in recovering their vocabulary or grammar. Yet most rehabilitation programmes are geared to teach patients to find the right words or produce proper sentences. That may not be the most effective approach. We’re planning a pilot course to teach aphasic speakers to speak, exploiting the basic interactional skills they still have.” Also, her research could be used to improve communication skills, for example for lawyers or (deaf) children learning language. Pascual has a tenure-track appointment and hopes to stay on for a good while yet in Groningen. “This is a great university with a lot of talent, good facilities and programmes, and a friendly atmosphere. And Groningen is a pleasant, lively city with a rare combination of culture and nature. I’ve worked at various universities in four different countries, but I’d like to settle here now.”

How to match your international food with Dutch lunch.

your appetite for some good old-fashioned Dutch cuisine, like stamppot (potato &amp; vegetable mash) or snert (pea soup). Or is there? Four pharmacy students explain their complicated relationship with the Dutch and their food. “Too much Dutch food makes me sick.”

By MICHIEL KLAASSEN Chinese student Xiaoyu Niu (29) is the first to reveal her dislike of Dutch dishes. “For the first two years I usually brought in Chinese food for lunch, like fried vegetables with rice, which I’d prepared at home the day before”, she recalls. “But now I bring in some sandwiches.” Does this indicate a growing appreciation of Dutch delicacies? “No”, she chuckles. “I still like my own food better, but it takes too long to prepare…” Shuishi Sekine (30) does not fancy Dutch cuisine either, which dramatically limits his options in the cafeteria. “I am not a fan of frikandellen”, he admits, referring to the minced meat hot dog, an all-time favourite of the Dutch, who even take it with them on vacation. However, most foreigners dislike that deep-fried delicacy. Indeed, Sekine, originally from Japan, prefers the kind of lunch he would get in Japan. “Sometimes they serve rice in the cafeteria.” That is much appreciated because preparing his own food the day before is not an option. “I cannot cook at all.”

For Ming Li (25) from China, cooking is not a problem. “If I have the time, I cook my own food at home, which I bring in with me the following day.” When time is scarce, he eats sandwiches for lunch, like the Dutch. However, Ming would rather eat more traditional Chinese food, like chicken with cucumber and peanuts. This does not mean he rejects Dutch cuisine altogether. “Dutch food is good, but not all the time”, he admits. “It would make me sick.” Not everyone is pleased with the cafeteria, though. “I’ve been here for four years”, says Mackenzie Hadi (27) from Indonesia. “So I know the type of food by now. It is boring.” Even when the cafeteria serves stamppot on cold winter days? The Indonesian PhD student won’t budge on his view. “It doesn’t have any taste to it. I am used to more spicy food.” So why doesn’t he try the Indonesian restaurants in Groningen? “I have – I am a huge fan of Nasi Goreng. But the Dutch version is totally different to the one back home.” The local food has proved nothing but a disappointment for Mackenzie. And he is not the only skeptic about Dutch food. Martin Johnson (34) from India admits he is not too fond of the cafeteria dishes either. “I bring food from home, like Dhahir Sadam rice with yoghurt or lentils with vegetables.” He is not a great cook, but that doesn’t seem to be a problem. “My wife cooks most of the food”, he admits. “I wouldn’t miss it for the world!”

arrived in Groningen, you may wonder what you’re reading now. What is this ‘UK’ University newspaper? By RENÉ FRANSEN The Universiteitskrant (University newspaper, UK (u:’ka:, or for non-linguists: oookaaa) first appeared 41 years ago, as an independent weekly for staff and students at the University of Groningen. Internationalization was not an issue back then, so the abbreviation ‘UK’ didn’t cause any confusion. The newspaper is put together by a small editorial staff and numerous freelance editors, mostly students, at offices located at the

Oude Kijk in ’t Jatstraat, near the Harmonie building. The UK tries to cover all aspects of university life, from research to teaching to culture and student life. From September 2005 this was expanded to include international student life as well. Our ‘international page’ started out as just that, one page. Then it became two, and since last September there have been three

pages in English, reflecting the importance of internationalization. On these pages we try to follow our usual themes, but we have added some ‘targeted information’ for international students. We’re still an independent newspaper, as the Board of the University feels that free, uncensored expression and debate are part of academic life. But as the media landscape is changing rapidly, we’re constantly re-inventing ourselves. In addition to the printed paper, we provide a news service on our website and we also communicate through social media, like Facebook and Twitter. This week sees the launch of our own app. Let is know what you think of us, via uk@rug.nl 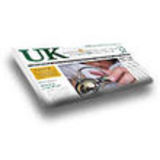