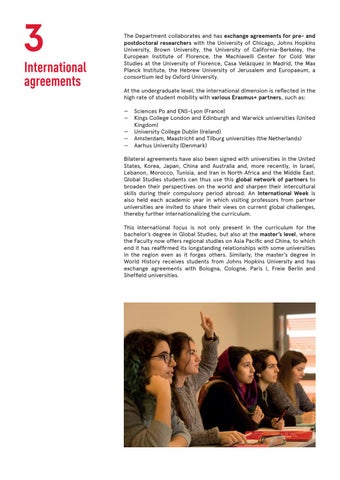 The Department collaborates and has exchange agreements for pre- and postdoctoral researchers with the University of Chicago, Johns Hopkins University, Brown University, the University of California-Berkeley, the European Institute of Florence, the Machiavelli Center for Cold War Studies at the University of Florence, Casa Velázquez in Madrid, the Max Planck Institute, the Hebrew University of Jerusalem and Europaeum, a consortium led by Oxford University. At the undergraduate level, the international dimension is reflected in the high rate of student mobility with various Erasmus+ partners, such as: —— Sciences Po and ENS-Lyon (France) —— Kings College London and Edinburgh and Warwick universities (United Kingdom) —— University College Dublin (Ireland) —— Amsterdam, Maastricht and Tilburg universities (the Netherlands) —— Aarhus University (Denmark) Bilateral agreements have also been signed with universities in the United States, Korea, Japan, China and Australia and, more recently, in Israel, Lebanon, Morocco, Tunisia, and Iran in North Africa and the Middle East. Global Studies students can thus use this global network of partners to broaden their perspectives on the world and sharpen their intercultural skills during their compulsory period abroad. An International Week is also held each academic year in which visiting professors from partner universities are invited to share their views on current global challenges, thereby further internationalizing the curriculum. This international focus is not only present in the curriculum for the bachelor’s degree in Global Studies, but also at the master’s level, where the Faculty now offers regional studies on Asia Pacific and China, to which end it has reaffirmed its longstanding relationships with some universities in the region even as it forges others. Similarly, the master’s degree in World History receives students from Johns Hopkins University and has exchange agreements with Bologna, Cologne, Paris I, Freie Berlin and Sheffield universities. 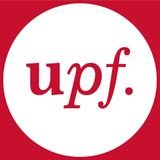