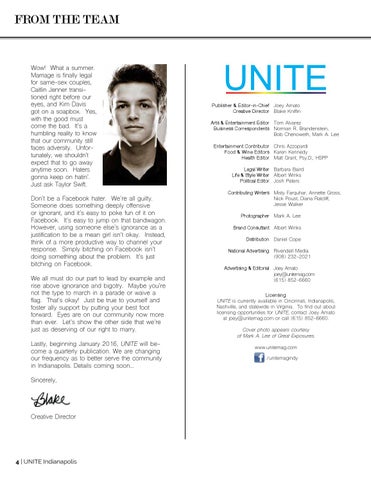 Wow! What a summer. Marriage is finally legal for same-sex couples, Caitlin Jenner transitioned right before our eyes, and Kim Davis got on a soapbox. Yes, with the good must come the bad. It’s a humbling reality to know that our community still faces adversity. Unfortunately, we shouldn’t expect that to go away anytime soon. Haters gonna keep on hatin’. Just ask Taylor Swift. Don’t be a Facebook hater. We’re all guilty. Someone does something deeply offensive or ignorant, and it’s easy to poke fun of it on Facebook. It’s easy to jump on that bandwagon. However, using someone else’s ignorance as a justification to be a mean girl isn’t okay. Instead, think of a more productive way to channel your response. Simply bitching on Facebook isn’t doing something about the problem. It’s just bitching on Facebook. We all must do our part to lead by example and rise above ignorance and bigotry. Maybe you’re not the type to march in a parade or waive a flag. That’s okay! Just be true to yourself and foster ally support by putting your best foot forward. Eyes are on our community now more than ever. Let’s show the other side that we’re just as deserving of our right to marry. Lastly, beginning January 2016, UNITE will become a quarterly publication. We are changing our frequency as to better serve the community in Indianapolis. Details coming soon... Sincerely,

UNITE Indianapolis features the incredible work of Mark A. Lee in the current issue. His historic LGBT exhibit opens this month.