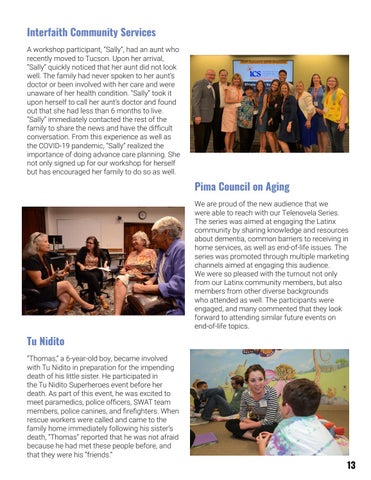 Interfaith Community Services A workshop participant, “Sally”, had an aunt who recently moved to Tucson. Upon her arrival, “Sally” quickly noticed that her aunt did not look well. The family had never spoken to her aunt’s doctor or been involved with her care and were unaware of her health condition. “Sally” took it upon herself to call her aunt’s doctor and found out that she had less than 6 months to live. “Sally” immediately contacted the rest of the family to share the news and have the difficult conversation. From this experience as well as the COVID-19 pandemic, “Sally” realized the importance of doing advance care planning. She not only signed up for our workshop for herself but has encouraged her family to do so as well.

Pima Council on Aging We are proud of the new audience that we were able to reach with our Telenovela Series. The series was aimed at engaging the Latinx community by sharing knowledge and resources about dementia, common barriers to receiving in home services, as well as end-of-life issues. The series was promoted through multiple marketing channels aimed at engaging this audience. We were so pleased with the turnout not only from our Latinx community members, but also members from other diverse backgrounds who attended as well. The participants were engaged, and many commented that they look forward to attending similar future events on end-of-life topics.

Tu Nidito “Thomas,” a 6-year-old boy, became involved with Tu Nidito in preparation for the impending death of his little sister. He participated in the Tu Nidito Superheroes event before her death. As part of this event, he was excited to meet paramedics, police officers, SWAT team members, police canines, and firefighters. When rescue workers were called and came to the family home immediately following his sister’s death, “Thomas” reported that he was not afraid because he had met these people before, and that they were his “friends.” 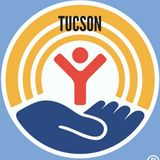