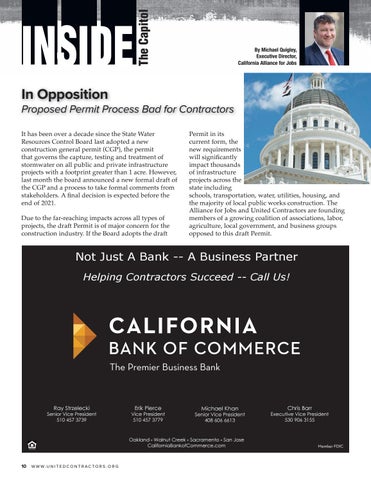 Proposed Permit Process Bad for Contractors It has been over a decade since the State Water Resources Control Board last adopted a new construction general permit (CGP), the permit that governs the capture, testing and treatment of stormwater on all public and private infrastructure projects with a footprint greater than 1 acre. However, last month the board announced a new formal draft of the CGP and a process to take formal comments from stakeholders. A ﬁnal decision is expected before the end of 2021. Due to the far-reaching impacts across all types of projects, the draft Permit is of major concern for the construction industry. If the Board adopts the draft

Permit in its current form, the new requirements will signiﬁcantly impact thousands of infrastructure projects across the state including schools, transportation, water, utilities, housing, and the majority of local public works construction. The Alliance for Jobs and United Contractors are founding members of a growing coalition of associations, labor, agriculture, local government, and business groups opposed to this draft Permit.

Not Just A Bank -- A Business Partner Helping Contractors Succeed -- Call Us! 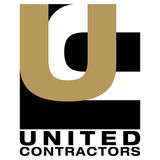