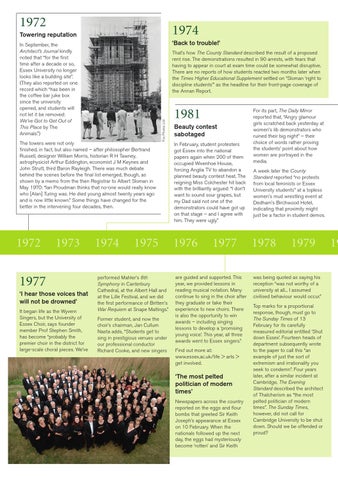 In September, the Architect’s Journal kindly noted that “for the first time after a decade or so, Essex University no longer looks like a building site”. (They also reported on one record which “has been in the coffee bar juke box since the university opened, and students will not let it be removed: We’ve Got to Get Out of This Place by The Animals.”) The towers were not only finished, in fact, but also named – after philosopher Bertrand Russell, designer William Morris, historian R H Tawney, astrophysicist Arthur Eddington, economist J M Keynes and John Strutt, third Baron Rayleigh. There was much debate behind the scenes before the final list emerged, though, as shown by a memo from the then Registrar to Albert Sloman in May 1970: “Ian Proudman thinks that no-one would really know who [Alan] Turing was. He died young almost twenty years ago and is now little known.” Some things have changed for the better in the intervening four decades, then.

1977 ‘I hear those voices that will not be drowned’ It began life as the Wyvern Singers, but the University of Essex Choir, says founder member Prof Stephen Smith, has become “probably the premier choir in the district for large-scale choral pieces. We’ve

That’s how The County Standard described the result of a proposed rent rise. The demonstrations resulted in 90 arrests, with fears that having to appear in court at exam time could be somewhat disruptive. There are no reports of how students reacted two months later when the Times Higher Educational Supplement settled on “Sloman ‘right to discipline students’” as the headline for their front-page coverage of the Annan Report.

performed Mahler’s 8th Symphony in Canterbury Cathedral, at the Albert Hall and at the Lille Festival, and we did the first performance of Britten’s War Requiem at Snape Maltings.” Former student, and now the choir’s chairman, Jan Cullum Nasta adds, “Students get to sing in prestigious venues under our professional conductor Richard Cooke, and new singers

1981 Beauty contest sabotaged In February, student protesters got Essex into the national papers again when 200 of them occupied Wivenhoe House, forcing Anglia TV to abandon a planned beauty contest heat. The reigning Miss Colchester hit back with the brilliantly argued: “I don’t want to sound sour grapes, but my Dad said not one of the demonstrators could have got up on that stage – and I agree with him. They were ugly.”

are guided and supported. This year, we provided lessons in reading musical notation. Many continue to sing in the choir after they graduate or take their experience to new choirs. There is also the opportunity to win awards – including singing lessons to develop a ‘promising young voice’. This year, all three awards went to Essex singers.” Find out more at: www.essex.ac.uk/life &gt; arts &gt; get involved.

‘The most pelted politician of modern times’ Newspapers across the country reported on the eggs and flour bombs that greeted Sir Keith Joseph’s appearance at Essex on 10 February. When the nationals followed up the next day, the eggs had mysteriously become ‘rotten’ and Sir Keith

For its part, The Daily Mirror reported that, “Angry glamour girls scratched back yesterday at women’s lib demonstrators who ruined their big night” – their choice of words rather proving the students’ point about how women are portrayed in the media. A week later the County Standard reported “no protests from local feminists or Essex University students” at a topless women’s mud wrestling event at Dedham’s Birchwood Hotel, indicating that proximity might just be a factor in student demos.

was being quoted as saying his reception “was not worthy of a university at all... I assumed civilised behaviour would occur.” Top marks for a proportional response, though, must go to The Sunday Times of 13 February for its carefully measured editorial entitled ‘Shut down Essex’. Fourteen heads of department subsequently wrote to the paper to call this “an example of just the sort of extremism and irrationality you seek to condemn”. Four years later, after a similar incident at Cambridge, The Evening Standard described the architect of Thatcherism as “the most pelted politician of modern times”. The Sunday Times, however, did not call for Cambridge University to be shut down. Should we be offended or proud?

The new-look Essex Effect has exclusive stories about our University and alumni. Features include a look at life in the Towers in the ’70s and today and an ‘unofficial history’ pull-out.