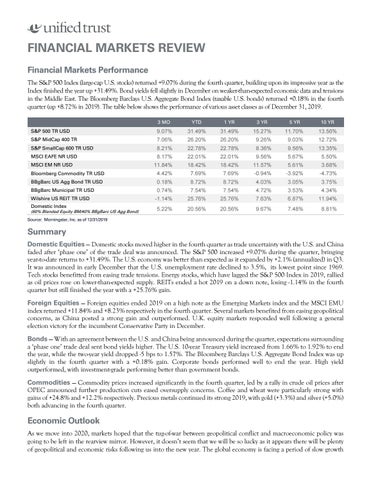 FINANCIAL MARKETS REVIEW Financial Markets Performance The S&P 500 Index (large-cap U.S. stocks) returned +9.07% during the fourth quarter, building upon its impressive year as the Index finished the year up +31.49%. Bond yields fell slightly in December on weaker-than-expected economic data and tensions in the Middle East. The Bloomberg Barclays U.S. Aggregate Bond Index (taxable U.S. bonds) returned +0.18% in the fourth quarter (up +8.72% in 2019). The table below shows the performance of various asset classes as of December 31, 2019. 3 MO

Summary Domestic Equities — Domestic stocks moved higher in the fourth quarter as trade uncertainty with the U.S. and China faded after ‘phase one’ of the trade deal was announced. The S&P 500 increased +9.07% during the quarter, bringing year-to-date returns to +31.49%. The U.S. economy was better than expected as it expanded by +2.1% (annualized) in Q3. It was announced in early December that the U.S. unemployment rate declined to 3.5%, its lowest point since 1969. Tech stocks benefitted from easing trade tensions. Energy stocks, which have lagged the S&P 500 Index in 2019, rallied as oil prices rose on lower-than-expected supply. REITs ended a hot 2019 on a down note, losing -1.14% in the fourth quarter but still finished the year with a +25.76% gain. Foreign Equities — Foreign equities ended 2019 on a high note as the Emerging Markets index and the MSCI EMU index returned +11.84% and +8.23% respectively in the fourth quarter. Several markets benefited from easing geopolitical concerns, as China posted a strong gain and outperformed. U.K. equity markets responded well following a general election victory for the incumbent Conservative Party in December. Bonds — With an agreement between the U.S. and China being announced during the quarter, expectations surrounding a ‘phase one’ trade deal sent bond yields higher. The U.S. 10-year Treasury yield increased from 1.66% to 1.92% to end the year, while the two-year yield dropped -5 bps to 1.57%. The Bloomberg Barclays U.S. Aggregate Bond Index was up slightly in the fourth quarter with a +0.18% gain. Corporate bonds performed well to end the year. High yield outperformed, with investment-grade performing better than government bonds. Commodities — Commodity prices increased significantly in the fourth quarter, led by a rally in crude oil prices after OPEC announced further production cuts eased oversupply concerns. Coffee and wheat were particularly strong with gains of +24.8% and +12.2% respectively. Precious metals continued its strong 2019, with gold (+3.3%) and silver (+5.0%) both advancing in the fourth quarter.

Economic Outlook As we move into 2020, markets hoped that the tug-of-war between geopolitical conflict and macroeconomic policy was going to be left in the rearview mirror. However, it doesn’t seem that we will be so lucky as it appears there will be plenty of geopolitical and economic risks following us into the new year. The global economy is facing a period of slow growth

as ongoing trade tensions and heightened political uncertainty continue to act as a drag on global trade, manufacturing activity and business investment. There are, however, several key “swing” factors that could pave the way to a moderate recovery in U.S. and global growth over the course of 2020. Trade negotiations between the U.S and China continue to be a wildcard as the risk that the ‘phase one’ deal will go unsigned remains (similar agreements in the past have come undone in the eleventh hour). The ongoing trade war has suppressed capital spending and affected CEO confidence, which fell in the third quarter to its lowest level since the financial crisis. Protracted trade negotiations are likely to push the U.S. economy closer to a recession as it would further impact business confidence and investments. However, both parties have incentives to reach a trade deal soon. President Trump is hoping to be able to declare victory in the trade war ahead of his 2020 reelection bid meanwhile President Xi is balancing short-term economic stimulus versus China’s longer-term need to reduce debt levels. The Federal Reserve announced in December that they will be keeping the Fed Funds target rate at its current range of 1.50% to 1.75% while signaling to markets not to expect any cuts in 2020. The decision came after lowering rates a quarter percent in July, September and October, indicating that the central bank believes the economy is stronger now than it was over the summer. With stocks at record highs, unemployment at 50-year lows and inflation tame, it’s difficult to see an argument to cut rates further. However, Jerome Powell did leave the door open to changing rates in 2020 as gradual wage growth and tariff-related price pressures could continue to nudge U.S. inflation higher which could cause the Fed’s policies to shift. Inflation remains lower than expected in Europe and Japan, potentially warranting the continuation of supportive fiscal and monetary policies. Chinese officials have announced several new accommodative measures, but investors believe more meaningful stimulus could be on the horizon as the Chinese government seeks to combat slowing growth. The U.S. unemployment rate remains at a 50-year low of 3.5. This has helped bolster consumer confidence, which has remained near 18-year highs for much of 2019. Wage growth accelerated over the second half of 2019, surpassing inflation, which means that consumers have seen their purchasing power increase. Wage growth is expected to continue in 2020, further supporting consumer consumption. The strength of the consumer and their willingness to keep shopping has helped offset declining business investment in the face of the trade war and an uncertain outlook. The U.S. manufacturing sector hasn’t had the same fortune as the widely-followed ISM manufacturing index fell to 47.2 in December, marking the fifth straight month of contraction for the U.S. Fortunately, the manufacturing sector makes up only about a tenth of the U.S. economy, but a pivot in this index could help push markets higher. The U.S.–China trade war took a toll on global growth rates in 2019 but growth is expected to recover to above-trend levels in 2020. The ongoing trade conflict weighed heavily on business confidence in the second half of 2019 and slowed the pace of capital expenditures. The slowdown in U.S. business investment in 2019 is expected to continue into 2020, as fiscal policy support rolls off. 2020 U.S. GDP is expected to come in lower than the growth rates of 2.9% and 2.4% that we saw in 2018 and 2017 respectively. Globally, the slowdown in business investment in the latter part of 2019 is expected to cause growth to start 2020 at a subpar pace before picking up mid-year, as political uncertainty surrounding the U.S. Presidential election and Brexit start to clear up. The implementation of ‘phase one’ of the U.S.-China trade deal should allow business sentiment to firm. Slow global growth should help keep inflation at bay, giving central banks little incentive to move interest rates higher. The continuation of neutral to accommodative monetary policies by the global central banks is expected to serve as a back stop for equities, but corporate earnings should be the primary driver of equity returns in 2020. Earnings for S&P 500 companies are expected to grow by almost 10%, giving equity investors reason for optimism. With the Fed expected to leave rates unchanged in 2020, fixed income investors are likely to experience returns that match the coupons on their bonds. Though the current economic expansion is well into its 11th year, the odds of the U.S. economy entering a recession this year remain muted. We don’t expect investment returns to match those of 2019, but current conditions favor a continuation of the positive trend.

Large companies with sustainable competitive advantages and excellent balance sheets tend to outperform during market corrections, yet largely keep pace in rising markets. While the pace of global economic growth and corporate profit growth have slowed, they remain in positive territory and should remain a tailwind for equities for now. Stretched valuations may limit gains over the intermediate term (7-10 years).

Small caps tend to perform best coming out of an economic slowdown, when economic growth is accelerating off the bottom of the previous business cycle. As much of the recent economic data is consistent with conditions found in the late part of an economic expansion, small-cap returns are likely to trail large caps.

Persistent strength in the U.S. dollar and the only partially resolved trade spat between the U.S. and China remain headwinds for emerging markets stocks. Valuations appear reasonable, but positive returns are likely dependent on a trend reversal in commodity prices and an amicable resolution to the trade dispute.

Rates are expected to remain low for the short to intermediateterm, which should keep investors interested in the high yield space. While spread fluctuations will be a factor in near-term performance, investors should expect returns to match the underlying coupons while low default rates and strong corporate profits persist.

The three rate cuts delivered by the Fed in 2019 worked against these adjustable-rate investments. With the Fed expected to keep rates unchanged in 2020, variable-rate investors should brace for coupon-like returns and should not expect bank loan yields to improve until next year at the earliest.

Forecasts for global economic growth remain muted, which is expected to keep both inflation and commodity prices in check. The Fed’s favored inflation measure – the Core PCE – remains below its 2% inflation target. Fed economists expect inflation to stabilize around the 2% level at least through 2021 which will limit returns.

REIT performance was impressive in 2019, thanks in part to the downward pressure on interest rates and slowing global economic growth. With the Fed now on hold, interest rates at very low levels and inflation in check, REITs remain a viable option for income investors. Exposure to certain segments negatively impacted by slowing economic growth, such as office and retail REITs, should be limited.

The partial resolution to the U.S.-China trade dispute and the expected improvement in global economic growth in 2020 are positives for commodity investors, though much of this good news appears priced in. There is more room for upside should the U.S. dollar decline as some are predicting. It’s noteworthy that commodities have historically performed well in the latter stages of the business cycle; which is where the global economy finds itself.