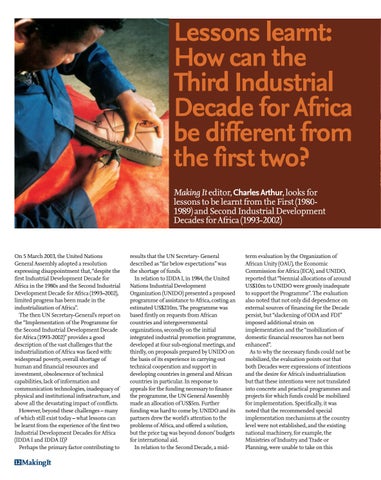 Lessons learnt: How can the Third Industrial Decade for Africa be different from the first two? Making It editor, Charles Arthur, looks for lessons to be learnt from the First (19801989) and Second Industrial Development Decades for Africa (1993-2002)

results that the UN Secretary- General described as “far below expectations” was the shortage of funds. In relation to IDDA I, in 1984, the United Nations Industrial Development Organization (UNIDO) presented a proposed programme of assistance to Africa, costing an estimated US$210m. The programme was based firstly on requests from African countries and intergovernmental organizations, secondly on the initial integrated industrial promotion programme, developed at four sub-regional meetings, and thirdly, on proposals prepared by UNIDO on the basis of its experience in carrying out technical cooperation and support in developing countries in general and African countries in particular. In response to appeals for the funding necessary to finance the programme, the UN General Assembly made an allocation of US$5m. Further funding was hard to come by. UNIDO and its partners drew the world’s attention to the problems of Africa, and offered a solution, but the price tag was beyond donors’ budgets for international aid. In relation to the Second Decade, a mid-

term evaluation by the Organization of African Unity (OAU), the Economic Commission for Africa (ECA), and UNIDO, reported that “biennial allocations of around US$10m to UNIDO were grossly inadequate to support the Programme”. The evaluation also noted that not only did dependence on external sources of financing for the Decade persist, but “slackening of ODA and FDI” imposed additional strain on implementation and the “mobilization of domestic financial resources has not been enhanced”. As to why the necessary funds could not be mobilized, the evaluation points out that both Decades were expressions of intentions and the desire for Africa’s industrialization but that these intentions were not translated into concrete and practical programmes and projects for which funds could be mobilized for implementation. Specifically, it was noted that the recommended special implementation mechanisms at the country level were not established, and the existing national machinery, for example, the Ministries of Industry and Trade or Planning, were unable to take on this 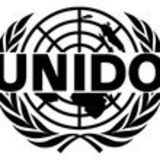