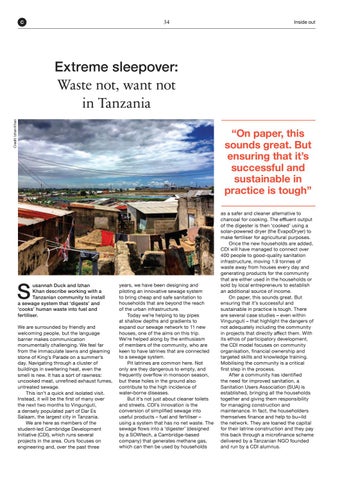 Extreme sleepover: Waste not, want not in Tanzania

usannah Duck and Izhan Khan describe working with a Tanzanian community to install a sewage system that ‘digests’ and ‘cooks’ human waste into fuel and fertiliser. We are surrounded by friendly and welcoming people, but the language barrier makes communication monumentally challenging. We feel far from the immaculate lawns and gleaming stone of King’s Parade on a summer’s day. Navigating through a cluster of buildings in sweltering heat, even the smell is new. It has a sort of rawness: uncooked meat, unrefined exhaust fumes, untreated sewage. This isn’t a quick and isolated visit. Instead, it will be the first of many over the next two months to Vingunguti, a densely populated part of Dar Es Salaam, the largest city in Tanzania. We are here as members of the student-led Cambridge Development Initiative (CDI), which runs several projects in the area. Ours focuses on engineering and, over the past three

“On paper, this sounds great. But ensuring that it’s successful and sustainable in practice is tough”

years, we have been designing and piloting an innovative sewage system to bring cheap and safe sanitation to households that are beyond the reach of the urban infrastructure. Today we’re helping to lay pipes at shallow depths and gradients to expand our sewage network to 11 new houses, one of the aims on this trip. We’re helped along by the enthusiasm of members of the community, who are keen to have latrines that are connected to a sewage system. Pit latrines are common here. Not only are they dangerous to empty, and frequently overflow in monsoon season, but these holes in the ground also contribute to the high incidence of water-borne diseases. But it’s not just about cleaner toilets and streets. CDI’s innovation is the conversion of simplified sewage into useful products – fuel and fertiliser – using a system that has no net waste. The sewage flows into a ‘digester’ (designed by a SOWtech, a Cambridge-based company) that generates methane gas, which can then be used by households

as a safer and cleaner alternative to charcoal for cooking. The effluent output of the digester is then ‘cooked’ using a solar-powered dryer (the EvapoDryer) to make fertiliser for agricultural purposes. Once the new households are added, CDI will have managed to connect over 400 people to good-quality sanitation infrastructure, moving 1.9 tonnes of waste away from houses every day and generating products for the community that are either used in the households or sold by local entrepreneurs to establish an additional source of income. On paper, this sounds great. But ensuring that it’s successful and sustainable in practice is tough. There are several case studies – even within Vingunguti – that highlight the dangers of not adequately including the community in projects that directly affect them. With its ethos of participatory development, the CDI model focuses on community organisation, financial ownership and targeted skills and knowledge training. Mobilising the community is a critical first step in the process. After a community has identified the need for improved sanitation, a Sanitation Users Association (SUA) is established, bringing all the households together and giving them responsibility for managing construction and maintenance. In fact, the householders themselves finance and help to bu=ild the network. They are loaned the capital for their latrine construction and they pay this back through a microfinance scheme delivered by a Tanzanian NGO founded and run by a CDI alumnus. 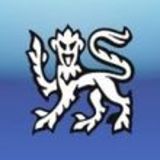 More from University of Cambridge