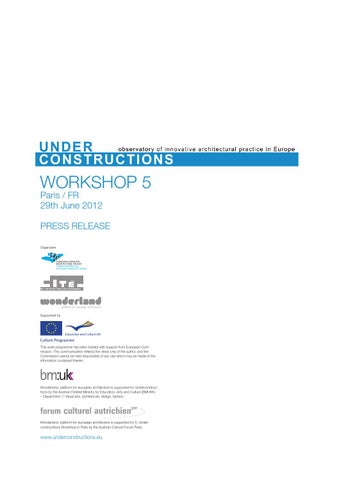 Wonderland, platform for european architecture is supported for 5. Underconstructions Workshop in Paris by the Austrian Cultural Forum Paris.

Workshop For the 5th workshop, processes within the context of urban renewal projects were brought together. The participants were outstanding achievers, jointly launching new fields of action, with global and long-term impact. This workshop was kindly hosted by the Cité de l’Architecture et du Patrimoine in Paris.

HQAC Stefan Skanland Gilles Montmory TRANS305, Ivry-sur-Seine HQAC is proposed as a label, created to communicate with local authorities and developers. The acronym is a reference on the name of the first green architecture label in France: HQE, which specialized in promoting approach over rules or conventions. Following several collaborations, the artist Stefan Shankland and the city of Ivry-sur-Seine (on the southern border of Paris), chose to renew the local urban art intervention program. HQAC was created and it stands for «High Artistic and Cultural Quality». Stefan Shankland defines it as a method between propaganda and activism.

In Ivry-sur-Seine, where 25 % of the city is in a phase of urban transformation, the city council voted for HQAC in 2007. Serving as a program prototype to the HQAC approach, the process labeled as TRANS305 will be developed during the 6 to 8 years on the ZAC du Plateau, a vast development area. It will create a common ground where developers, urban planners, cultural actors, education professionals and children, city services and politicians can work together. The program is currently considered as a major urban tool by the city for reverse urban mutation. During the last five years (2007-2012), TRANS305 lead several activities which were integrated into the consultation, planning, demolition and construction of the ZAC du Plateau. An architecture-sculpture pavilion on the construction site of the l’Atelier/TRANS305 was constructed. Artistic projects linked to urban mutation, such as installations and exhibitions were created, documentation was gathered, an edition was published and a website, www.trans305.org, was created. Two research program (CNRS / PIRVE by Ministère de la Culture et Communication &amp; Ecole Nationale Supérieure d’Art de Dijon) were completed. Analyses on the statute of art practice in making the city sustainable were conducted with the city, the developer and institutions of higher education. Many encounters and meetings were organized where exchanges took place, accomplishing public visibility, and giving an identity to this neighborhood in transformation. The research made on this process came to the conclusion that its main achievement is modifying the perception of inhabitants, politicians, developers and professionals in their practices, and their way of thinking, and that art center on the development area have to be changed. It is about dilatation, to make the building site visible and to ensure it becomes a part of the city.

It is also about indetermination, even when everything seems to be well planned, the possibility of integrate something new still exists. It points out the issue of the determination of overplanning, which wants to prove that everything is controlled but creates a fixed picture which is outdated when completed. TRANS305 transforms a large development area which could be defined as a «no place» / «no time» area, into an available resource. Gilles Montory, urban planner of the city council, underlined that TRANS305 is a rare case where cultural action and urban retrofit meet. He stated that the artist isn’t a social worker in the city, (s)he’s a catalyzer who empowers on an individual scale. The main concern of Stefan Skankland is to change the state of mind of the inhabitants or the users of the city, he would like to see them become more reactive in there daily lives and make their own decisions in regards to their lives. 2011 the TRANS305 program received the Prix COAL Art &amp; Environment.

R-Urban Atelier d’Architecture Autogéré (coordinateur) Marie de Colombes Public Works To go beyond the actual crisis, R-urban follows the thoughts of Andre Gorz in producing what we consume and consuming what we produce. R-urban proposes the creation of local resilience networks and short closed ecological, economic, social and cultural circuit links to urban activities (living, working, mobility and urban agriculture) by using the territory of the city in a reversible way. It offers tools and facilities to enable easy civic commitment. It is a critic of the Eco-ZAC´s. These are new developments in France which aren´t dealing with existing urban structures of the city. The objective of R-urban is to create an assimilation of the inhabitants and their city. This means creating a new life in an existing context. The process doesn’t provide an activity for the leisure of the citizens, it is more about including all aspects of life in the process, from working to living. Atelier d’Architecture Autogéré (AAA) demonstrated an innovative way of practicing architecture, where the architect is no longer in his/her office busy dealing with firms and institutions, but where (s)he is negotiating with people on site. The key for AAA is to multiply the partnerships involved in this process (city, institutions, inhabitants, workers, etc). R-urban has been funded with the support of the European Commission program Life+. The partners of the project are AAA (coordination), the city of Colombes (for the three prototype units) and PublicWorks from London (for the mobile unit).

R-Urban, London, UK by PublicWorks PublicWorks is a London based arts and architecture practice, working within and towards creating public space. The projects of PublicWorks address the question how public realm is shaped by its various users and how existing dynamics can help provide information for further proposals. Their focus is the production and extension of a particular public space through participation and collaborations. Projects span across different scales and address the relation between the informal and formal aspects of a site. PublicWorks aims to produce social, architectural and discursive spaces. Outputs include socio-spatial and physical structures, public events and publications.

R-Urban, Colombes, FR by AAA In Colombes, a suburb in the northwest of Paris, an experimental 4 year long program has just been launched. Based on three sites located within a bike-ride distance, R-urban has initiated an ecological urban metabolism about resilience, not in a technical way, but rather in a social, cultural and civil context. Three projects are to be implemented: AgroCité (experimental farming, community garden, pedagogic and cultural space, energy production), RecyLab (recycling and re-use pole of urban waste, dedicate to self-construction) and EcoHab (cooperative and ecological housing and shared space, with one part being self-constructed).

When beginning a new project, they start off by working as civic citizens, allowing them to be focused on the local scale. For instance, for the Abbey Garden project, they reclaimed a piece of derelict land as a friend group, which helped them utilize the statute which allows the easiest method of creation in the UK. As a result of this initiative, the Wick Curiosity Shop project emerged. PublicWorks organized a series of events, developed local products (seed bomb, ginger juice, etc) and set up an archive of memories on Hackney Wick in East London, an unregulated territory until it was renewed for the 2012 Olympic games. Following the London Olympics however, it will become a 41ha vacancy space without any use. The Wick Curiosity Shop activities are linked to the International Village Shop project, an experimental shop platform to exchange local products. The R-Urban project in London will be a mobile unit, the Wick On Wheels (WOW). WOW is a roaming production unit, which will travel across Hackney Wick and its surrounding areas. It will engage intensively with local communities to reuse, recycle, repair and re-make. It will explore and encourage direct, collective on site production using existing local materials, resources and skills. Production will focus on three areas in particular: narrative products, direct interventions on vacant sites and harvest maps. www.publicworksgroup.net

Final discussion and recommendations AAA: The city of Colombes and AAA are equal partners in the R-urban project, making it a unique case. This project should become a precedent, an example for further projects. R-urban is a 4 year project, which makes it a medium timed project, which is also the minimum time of duration such a process requires. The time duration should be longer, but it is difficult to obtain long periods of engagement with a city. The next step would be to create a real estate agency which would point the available spaces out.

EFAP stressed that such resilient processes are essential for urban innovation in Europe. Resilience theory, which has been at the core of this workshop, highlights precisely the importance of innovation in smaller scale systems and its impact on large scale functioning. What might seem as micro initiatives deserve support because their total accumulation can trigger major changes on a large scale. Underconstructions is precisely about these processes and EU funding is crucial for supporting such initiatives. AAA have been funded by the EUâ&amp;#x20AC;&amp;#x2122;s LIFE program, which gives them the latitude and independence necessary for experimenting out of the constraints of regular practice. EFAP draws attention to the possibilities of future Cohesion Policy. In structural and cohesion funds, which represent a 400 billion â&amp;#x201A;Ź budget, at least 5% will be allocated to cities. Of this sum 400 million will go towards experimentation projects. Furthermore, funding will no longer be provided by sector, but on a cross-cutting approach, which leaves space for experimenting with new ways of interacting in urban fabrics settings. The role of EFAP will be crucial during the development of national strategies for the allocation of these funds for giving to the city its role of being a testing ground of new cross-cutting resilient approaches. wonderland, platform for european architecture for underconstructions.eu

HQAC: Little projects like Trans305 can change the thinking of other follow-up projects in a city. Various other decisions will be made by politicians and the stakeholders. It is about setting up a precedent and creating a new culture of dealing with urban renewal projects. Wonderland: A transfer of information about these innovative projects and processes to other architects as well as to architecture students and politicians within Europe could push the constraints of architectural practice to a more experimental one. Underconstructions, an observatory of innovative practice in Europe is an essential contribution to this pressing demand pointed out wonderland, platform for european architecture.