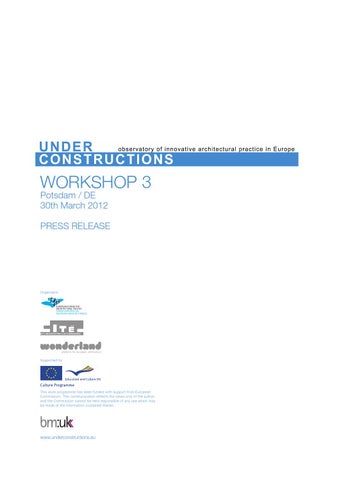 The third Underconstructions workshop was hosted at Bundesstiftung Baukultur, Potsdam / DE on the 30 of March 2012. Following the first two Underconstructions workshops taking place in Vienna and Rotterdam, this Workshop was devoted to the topic of „Rethinking inclusive strategies“ as an innovative method of implementing civic engagement in architecture and urban planning in Europe. Inclusive strategies have a tradition which is little-known in Europe. Hannes Schreckensberger and Celia Picard from wonderland offered a short historical review of the Austrian architect Eilfried Huth and his implementation of participatory practices in social housing projects from the 1970s to the 1990s. The participants heard about the importance of the socio-political will of local authorities in realizing such processes and how individual commitment was necessary to challenge and push &gt; Célia Picard, Hannes Schreckensberger, Tore Dobberstein, Marco Stathopoulos,Clément Mariotte, Yvette Masson-Zanussi, Carl Zillich, Verena Brehm, Florian Köhl. &gt; Hannes Schreckensberger, Marco Stathopoulos, Yvette Masson-Zanussi, Clément Mariotte.

the rules, in the past as well as in the present. Clément Mariotte from „Un plus Un“ introduced an innovative housing model they developed. The model allows modest families to own their own place of residency. It aims to provide families with affordable and unique apartments. The association assumes the role of facilitator between home-buyers, local authorities, developers, banks and building material suppliers. With the aid of lawyers, they developed an «uncomplicated state buy» system. They worked with banks in finding the right format of credit. Florian Köhl from FAT KOEHL offered a summary of his experience as an architect in his ongoing processes. He presented different variations of shared authorship strategies co-housing groups implement.

Together with his office in Berlin, which has been focusing on this

Following the presentations, a final discussion ensued. It focused on

field over the last few years, he accumulated a significant amount of

experience. Shared authorship is based on a clear definition of roles

about democracy. One of the recommendations coming out of the

between users, architects and the project manager. Its relation to the

discussion was to find and develop adequate conversation languages

city is fundamental for the office, and their work focuses on co-ope-

between the inhabitants and politics. Doing so could create new

rating with groups in integrating this relationship with the domestic

partnerships which foster inclusive strategies. The goal is to make

demand. As citizens actively engaged in their cities, they consider the

possible, the realization of new processes which can generate social

The workshop covered the questions of empowerment and parti-

cipatory practices on different levels in innovative manners, which

talked about the implementation of participation as a method in their

are showcases of good tools, as underlined by wonderland. Invited

practice. She focused on their study of the future transformation of the

architects and experts pointed out that a critically ethical approach,

airport Berlin Tegel area following its shutdown in the summer of 2012.

and innovative processes, were necessary in managing the high

One of the main theses their proposition had, which was prepared for

risk associated with the loss against the power of the construction

the consultation commissioned by the Senate Department for Urban

business and the reluctance of policies. The adaptation of these new

Development of Berlin, was the generation of engagement by changing

strategies require effort by policymakers and a strong will for change.

the tools of planning.

And finally, EFAP stressed that participatory practices play an important

Torre Dobberstein from the Planungsbüro Complizen introduced their innovative and award winning approach of implementing sports in urban planning. The so-called “Sportification” process utilizes sports as a universal medium. It serves as a method for constructing a playful argument which encourages discussions about the city. Inclusion in this process takes place through personal experience and the development of the feeling of belonging. This method brings up an important question: how much power do inhabitants have and how can they react to their social environment?

role in ensuring the evolution of policies that it aims to support. By setting the needs before the project and the rules, these processes give priority to the best solution in a specific situation. Good solutions, projects that work, provide the best information for adapting policies to reality. By disseminating information about possible architectural and urban planning processes, Underconstructions is a powerful tool for designing better European cities.