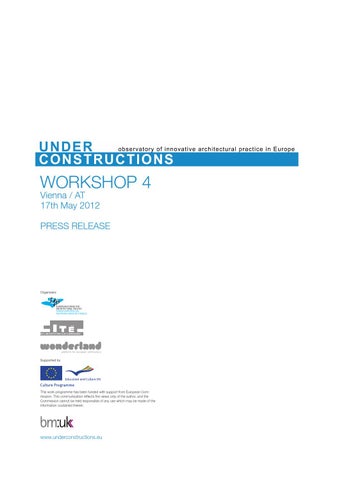 HOW TO WORK WITH THE CITY AUTHORITIES?

Workshop How to work with city authorities? The 4th underconstructions workshop, taking place in Vienna, connected representatives of various architectural practices coming from different generations. The topic of focus was creating strategies to improve collolaboration with the decision makers of the city. Participants exchanged their experiences and knowledge on the topic and presented diverse innovative forms of architecture and urban planning tools which could be used for discussion with stakeholders. The processes revealed can be seen as prototypes which had a certain impact on local authorities throughout Europe and helped foster more civic cities.

Umbauwerkstatt Linz, Austria Lorenz Potocnik kick-started the workshop by presenting the process of transformation. Together with a group of architects, urban planners and social scientists, he is engaged in the transformation of the empty Tabakfabrik, a huge former Tobacco Factory located in the heart of Linz. Umbauwerkstatt (transformation workshop), which was initiated in February 2010, is described as follows: „it is thought to be a think tank providing the necessary ideas and the stimulus required to counter the predictable inertia off municipal institutions by being a research lab for the future of the factory. Furthermore, Umbauwerkstatt aims at providing independent information and therefore transparency to citizens.“ The professional initiators used their expertise in several process-oriented projects to bring people together and give an impulse to the city. They utilized tools of communication to create a situation and provoke a reaction by city authorities. Despite all the energy invested however, it took quite a while for the local authorities to acknowledge the situation and take part in the discussion. This experience portrays the important role city authorities play in the management of the potential of energies.

Supertanker Copenhagen, Denmark Supertanker was founded in Copenhagen as a movement against urban renewal projects. It is a close-knit network of urban-social entrepreneurs working on the borders between action research, process design and urban development. For them, architecture is a tool for discussion. Supertanker has now established itself as an association and limited company and is funded through various social, arts and research grants. The network first unfolded as a civic urban laboratory in an otherwise antagonistic political climate surrounding the redevelopment of the Copenhagen harbor in 2003. They came to the realization that the contest process is not satisfactory enough, and more civic involvement is needed. They then set up the basis for a constructive dialogue between the city and its citizens. After this first experience, the group developed the process in medium scale towns where open discussions were still taking place. They functioned as commissioned mediators. Such a task is not easy for them however, since they have to ensure that they remain independent and objective, and refrain from being used as the communication tool of the authorities.

Estonoesunsolar Zaragoza, Spain Partizia Di Monte presented the process she managed, which took place in the historical quarter of the city of Zaragoza between 2009-2010. The outstanding aspect of this process is that it start from a local employment of a plan with spatial consequences, the creation of public space in abandoned plots. Partizia Di Monte explained how political involvement allows the achievement of so much despite the time and budget restrictions. This is a sample case of how the city made the difference by trusting the architect in charge and providing him/ her with technical and juridical support.

Collectif Etc France Collectif Etc is a group of young architects, urban-planners and graphic designers who collaborate with landscape designers, artists and social workers. They believe in the creative capacity of citizens and provide them with tools and simple techniques to ensure they are involved in the development and change of their own urban environments. Their actions are 1:1 tests and are not made to last, but rather to readapt or replace with others within few years, based on the response they receive from citizens. After setting up a city commissioned temporary public space in Saint Etienne, they are currently busy traveling throughout France for a whole year. Their agenda is based on meeting and working with the stakeholders and actors of the production taking place in the civic city. They see their practice as urban activators through action, education and discussion. They are now looking for long time projects rooted in local problems, and they would like make environmental changes to help achieve their desires.

Conclusion The testimonies point out the crucial role local authorities play and how their support is essential in the existence of innovative processes in cities, regardless of how they may initiate or support them, whether it be in a financial, technical or juridical way. Nevertheless, an independent status has to be established for the practices in charge in order to make possible a critical point of view, and to develop innovative processes.