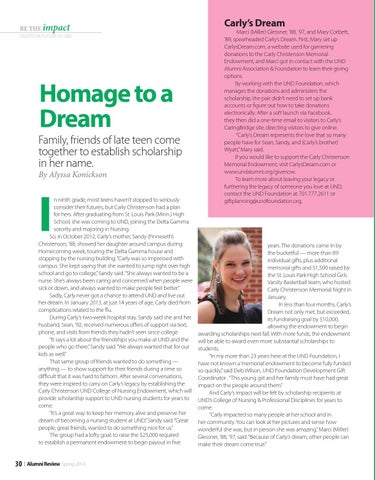 CREATE THE FUTURE OF UND

Homage to a Dream

Family, friends of late teen come together to establish scholarship in her name. By Alyssa Konickson

n ninth grade, most teens haven’t stopped to seriously consider their futures, but Carly Christenson had a plan for hers. After graduating from St. Louis Park (Minn.) High School, she was coming to UND, joining the Delta Gamma sorority and majoring in Nursing. So, in October 2012, Carly’s mother, Sandy (Finneseth) Christenson, ’88, showed her daughter around campus during Homecoming week, touring the Delta Gamma house and stopping by the nursing building. “Carly was so impressed with campus. She kept saying that she wanted to jump right over high school and go to college,” Sandy said. “She always wanted to be a nurse. She’s always been caring and concerned when people were sick or down, and always wanted to make people feel better.” Sadly, Carly never got a chance to attend UND and live out her dream. In January 2013, at just 14 years of age, Carly died from complications related to the flu. During Carly’s two-week hospital stay, Sandy said she and her husband, Sean, ’92, received numerous offers of support via text, phone, and visits from friends they hadn’t seen since college. “It says a lot about the friendships you make at UND and the people who go there,” Sandy said. “We always wanted that for our kids as well.” That same group of friends wanted to do something — anything — to show support for their friends during a time so difficult that it was hard to fathom. After several conversations, they were inspired to carry on Carly’s legacy by establishing the Carly Christenson UND College of Nursing Endowment, which will provide scholarship support to UND nursing students for years to come. “It’s a great way to keep her memory alive and preserve her dream of becoming a nursing student at UND,” Sandy said. “Great people, great friends, wanted to do something nice for us.” The group had a lofty goal: to raise the $25,000 required to establish a permanent endowment to begin payout in five

Marci (Miller) Glessner, ’88, ’97, and Mary Corbett, ’89, spearheaded Carly’s Dream. First, Mary set up CarlysDream.com, a website used for garnering donations to the Carly Christenson Memorial Endowment, and Marci got in contact with the UND Alumni Association & Foundation to learn their giving options. By working with the UND Foundation, which manages the donations and administers the scholarship, the pair didn’t need to set up bank accounts or figure out how to take donations electronically. After a soft launch via Facebook, they then did a one-time email to visitors to Carly’s CaringBridge site, directing visitors to give online. “Carly’s Dream represents the love that so many people have for Sean, Sandy, and (Carly’s brother) Wyatt,” Mary said. If you would like to support the Carly Christenson Memorial Endowment, visit CarlysDream.com or www.undalumni.org/givenow. To learn more about leaving your legacy or furthering the legacy of someone you love at UND, contact the UND Foundation at 701.777.2611 or giftplanning@undfoundation.org.

years. The donations came in by the bucketful — more than 89 individual gifts, plus additional memorial gifts and $1,500 raised by the St. Louis Park High School Girls Varsity Basketball team, who hosted Carly Christenson Memorial Night in January. In less than four months, Carly’s Dream not only met, but exceeded, its fundraising goal by $10,000, allowing the endowment to begin awarding scholarships next fall. With more funds, the endowment will be able to award even more substantial scholarships to students. “In my more than 23 years here at the UND Foundation, I have not known a ‘memorial’ endowment to become fully funded so quickly,” said Deb Wilson, UND Foundation Development Gift Coordinator . “This young girl and her family must have had great impact on the people around them.” And Carly’s impact will be felt by scholarship recipients at UND’s College of Nursing & Professional Disciplines for years to come. “Carly impacted so many people at her school and in her community. You can look at her pictures and sense how wonderful she was, but in person she was amazing,” Marci (Miller) Glessner, ’88, ’97, said. “Because of Carly’s dream, other people can make their dream come true.” 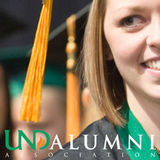 This issue marks the final column from Tim O'Keefe, '71, after leading the UND Alumni Association & Foundation for 11 1/2 years. You'll also...

This issue marks the final column from Tim O'Keefe, '71, after leading the UND Alumni Association & Foundation for 11 1/2 years. You'll also...