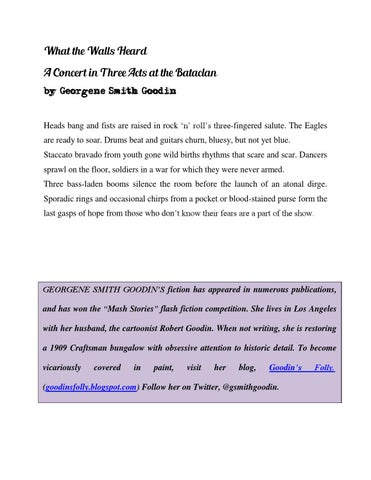 Heads bang and fists are raised in rock ‘n’ roll’s three-fingered salute. The Eagles are ready to soar. Drums beat and guitars churn, bluesy, but not yet blue. Staccato bravado from youth gone wild births rhythms that scare and scar. Dancers sprawl on the floor, soldiers in a war for which they were never armed. Three bass-laden booms silence the room before the launch of an atonal dirge. Sporadic rings and occasional chirps from a pocket or blood-stained purse form the last gasps of hope from those who don’t know their fears are a part of the show.

GEORGENE SMITH GOODIN’S fiction has appeared in numerous publications, and has won the “Mash Stories” flash fiction competition. She lives in Los Angeles with her husband, the cartoonist Robert Goodin. When not writing, she is restoring a 1909 Craftsman bungalow with obsessive attention to historic detail. To become vicariously 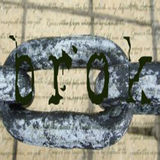