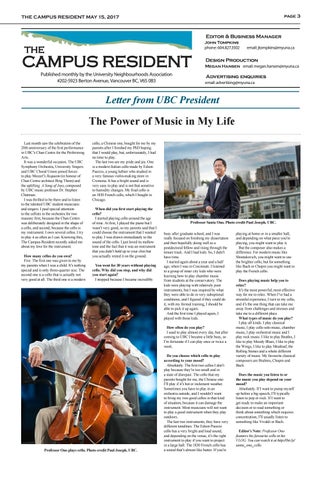 The Power of Music in My Life Last month saw the celebration of the 20th anniversary of the first performance in UBC’s Chan Centre for the Performing Arts. It was a wonderful occasion. The UBC Symphony Orchestra, University Singers and UBC Choral Union joined forces to play Mozart’s Requiem (in honour of Chan Centre architect Bing Thom) and the uplifting A Song of Joys, composed by UBC music professor Dr. Stephen Chatman. I was thrilled to be there and to listen to the talented UBC student musicians and singers. I paid special attention to the cellists in the orchestra for two reasons: first, because the Chan Centre was deliberately designed in the shape of a cello, and second, because the cello is my instrument. I own several cellos. I try to play it as often as I can. Knowing this, The Campus Resident recently asked me about my love for the instrument. How many cellos do you own? Five. The first one was given to me by my parents when I was a child. It’s nothing special and is only three-quarter size. The second one is a cello that is actually not very good at all. The third one is a modern

cello, a Chinese one, bought for me by my parents after I finished my PhD hoping that I would play, but, unfortunately, I had no time to play. The last two are my pride and joy. One is a modern Italian cello made by Edson Puozzo, a young luthier who studied in a very famous violin-making store in Cremona. It has a bright sound and is very easy to play and is not that sensitive to humidity changes. My final cello is an 1830 French cello, which I bought in Chicago. When did you first start playing the cello? I started playing cello around the age of nine. At first, I played the piano but I wasn’t very good, so my parents said that I could choose the instrument that I wanted to play. I was drawn immediately to the sound of the cello. I just loved its mellow tone and the fact that it was an instrument that you didn’t hold up to your chin but you actually rested it on the ground. You went for 30 years without playing cello. Why did you stop, and why did you start again? I stopped because I became incredibly

Professor Santa Ono. Photo credit Paul Joseph, UBC. busy after graduate school, and I was really focused on finishing my dissertation and then hopefully doing well as a postdoctoral fellow and rising through the tenure track. And I had kids. So, I didn’t have time. I started again about a year and a half ago, when I was in Cincinnati. I listened to a group of inner city kids who were learning how to play chamber music from students at the conservatory. The kids were playing with relatively poor instruments, but I was inspired by what they were able to do in very suboptimal conditions, and I figured if they could do it, with my formal training, I should be able to pick it up again. And the first time I played again, I played with those kids. How often do you play? I used to play almost every day, but after coming to UBC I became a little busy, so I’m fortunate if I can play once or twice a week.

Do you choose which cello to play according to your mood? Absolutely. The first two cellos I don’t play because they’re too small and in a state of disrepair. The cello that my parents bought for me, the Chinese one: I’ll play if it’s hot or inclement weather. Sometimes you have to play in an orchestra outside, and I wouldn’t want to bring my two good cellos in that kind of situation, because it can damage the instrument. Most musicians will not want to play a good instrument when they play outdoors. The last two instruments, they have very different tonalities. The Edson Puozzo cello has a very bright and loud sound, and depending on the venue, it’s the right instrument to play if you want to project in a large hall. The 1830 French cello has a sound that’s almost like butter. If you’re

playing at home or in a smaller hall, and depending on what piece you’re playing, you might want to play it. But the composer also makes a difference. For modern music like Shostakovich, you might want to use the brighter cello, but for something like Bach or Chopin you might want to play the French cello. Does playing music help you to relax? It’s the most powerful, most effective way for me to relax. When I’ve had a stressful experience, I turn to my cello, and it’s the one thing that can take me away from challenges and stresses and take me to a different place. What types of music do you play? I play all kinds. I play classical music, I play cello solo music, chamber music, I play orchestral music and I play rock music. I like to play Beatles, I like to play Moody Blues, I like to play the Wings, I like to play Meatloaf, the Rolling Stones and a whole different variety of music. My favourite classical composers are Brahms, Chopin and Bach. Does the music you listen to or the music you play depend on your mood? Absolutely. If I want to pump myself up before a big speech, I’ll typically listen to pop or rock. If I want to get ready to make an important decision or to read something or think about something which requires concentration, I’ll usually listen to something like Vivaldi or Bach. Editor’s Note: Professor Ono features his favourite cello in his VLOG. You can watch it at http://bit.ly/ santa_ono_cello. 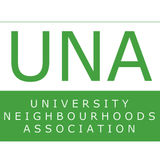