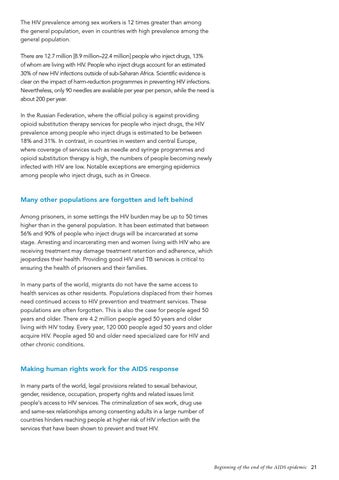 Many other populations are forgotten and left behind Among prisoners, in some settings the HIV burden may be up to 50 times higher than in the general population. It has been estimated that between 56% and 90% of people who inject drugs will be incarcerated at some stage. Arresting and incarcerating men and women living with HIV who are receiving treatment may damage treatment retention and adherence, which jeopardizes their health. Providing good HIV and TB services is critical to ensuring the health of prisoners and their families. In many parts of the world, migrants do not have the same access to health services as other residents. Populations displaced from their homes need continued access to HIV prevention and treatment services. These populations are often forgotten. This is also the case for people aged 50 years and older. There are 4.2 million people aged 50 years and older living with HIV today. Every year, 120 000 people aged 50 years and older acquire HIV. People aged 50 and older need specialized care for HIV and other chronic conditions.

Making human rights work for the AIDS response In many parts of the world, legal provisions related to sexual behaviour, gender, residence, occupation, property rights and related issues limit peopleâ&#x20AC;&#x2122;s access to HIV services. The criminalization of sex work, drug use and same-sex relationships among consenting adults in a large number of countries hinders reaching people at higher risk of HIV infection with the services that have been shown to prevent and treat HIV.

Beginning of the end of the AIDS epidemic 21 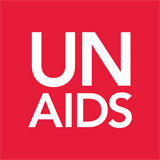