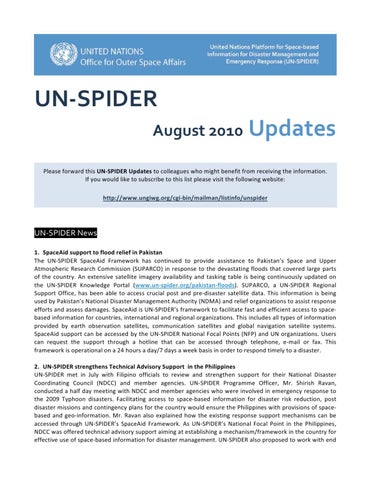 UN-SPIDER News 1. SpaceAid support to flood relief in Pakistan The UN-SPIDER SpaceAid Framework has continued to provide assistance to Pakistan’s Space and Upper Atmospheric Research Commission (SUPARCO) in response to the devastating floods that covered large parts of the country. An extensive satellite imagery availability and tasking table is being continuously updated on the UN-SPIDER Knowledge Portal (www.un-spider.org/pakistan-floods). SUPARCO, a UN-SPIDER Regional Support Office, has been able to access crucial post and pre-disaster satellite data. This information is being used by Pakistan’s National Disaster Management Authority (NDMA) and relief organizations to assist response efforts and assess damages. SpaceAid is UN-SPIDER’s framework to facilitate fast and efficient access to spacebased information for countries, international and regional organizations. This includes all types of information provided by earth observation satellites, communication satellites and global navigation satellite systems. SpaceAid support can be accessed by the UN-SPIDER National Focal Points (NFP) and UN organizations. Users can request the support through a hotline that can be accessed through telephone, e-mail or fax. This framework is operational on a 24 hours a day/7 days a week basis in order to respond timely to a disaster. 2. UN-SPIDER strengthens Technical Advisory Support in the Philippines UN-SPIDER met in July with Filipino officials to review and strengthen support for their National Disaster Coordinating Council (NDCC) and member agencies. UN-SPIDER Programme Officer, Mr. Shirish Ravan, conducted a half day meeting with NDCC and member agencies who were involved in emergency response to the 2009 Typhoon disasters. Facilitating access to space-based information for disaster risk reduction, post disaster missions and contingency plans for the country would ensure the Philippines with provisions of spacebased and geo-information. Mr. Ravan also explained how the existing response support mechanisms can be accessed through UN-SPIDER’s SpaceAid Framework. As UN-SPIDER’s National Focal Point in the Philippines, NDCC was offered technical advisory support aiming at establishing a mechanism/framework in the country for effective use of space-based information for disaster management. UN-SPIDER also proposed to work with end

users; not only during emergency response but also in the pre-disaster phase such as preparedness planning. Technical Advisory Support is one of the prime activities of the UN-SPIDER programme at the country level in order to identify the existing capacity to use space-based information, analysing the institutional network to support disaster management through space-based information and to find out the limiting factors. TAS aims at enabling the government to overcome current limitations regarding the use of space-based information for managing disasters by providing all possible opportunities and resources 3. UNOOSA and JBGIS Publish Booklet on “Geoinformation for Disaster and Risk Management - Best Practices and Examples” This landmark booklet published by the Joint Board of Geospatial Information Societies (JBGIS) and the United Nations Office for Outer Space Affairs (UNOOSA) outlines the potential uses of geo-information technologies to reduce the impact of natural or manmade disasters and risks. It brings together concise scientific contributions from experts around the world and creates a decision support forum based on their knowledge. The articles in the booklet cover natural disasters like earthquake, flood, volcano outbreak, tsunami, landslide, dust storm and wildfire, as well as societal issues like health care, refugee camps, urban sprawl and traffic infrastructure security. Case related regional studies are complemented by presentations of global information systems. Download the booklet here >> UN-SPIDER News

Community News 4. Disasters covered by Sentinel Asia in August Sentinel Asia, the Asia-Pacific Regional Space Agency Forum (APRSAF)-led initiative for supporting disaster management activities in the Asia-Pacific region by applying web-GIS and space-based technology, has supported five disasters in the month of August. The corresponding satellite imagery has been uploaded to Sentinel Asia’s website. They cover floods in Vietnam, two volcano eruptions in Indonesia, mudslide in China, and floods in the Upper Indus Basin area in India. Sentinel Asia started observing the floods in Pakistan on 31 July and is providing related satellite data on its Web GIS online application. For further information >> Sentinel Asia 5. International Charter Space and Major Disasters activated five times in August The activation of the International Charter Space and Major Disasters was requested by the US Office of Foreign Disaster Assistance on 1 August to provide support to the flood response in Pakistan. Six days later, the Rescue Service of the Czech Republic requested support, also due to floods. The following three requests were received from China: one from the China Meteorological Administration to support the response efforts to a massive landslide, and two from the China National Committee for Disaster Reduction due to debris flow in South-Western China. For further information >> International Charter Space and Major Disasters 6. SAFER activated for floods in Pakistan Late July 2010, heavy rain caused record flooding in Pakistan, especially along the Kabul River in the northwestern part of the country. The main city of the area, Peshawar, is isolated by water. On the 31st of July, 800 deaths and thousands of affected people were reported by authorities. Material damage is also considerable and access to a lot of urban areas is impossible. The European Commission has allocated 30 million Euros to help people affected by this major disaster. SAFER flood extent maps and other situation maps have been produced by SERTIT and by DLR/ZKI. For further information >> SAFER

7. Flood mapping for Pakistan by the International Center for Integrated Mountain Development (ICIMOD) Maps produced by ICIMOD are directly supporting the response efforts. ICIMOD, which is the International Centre for Integrated Mountain Development, is a regional knowledge development and learning centre serving the eight regional member countries of the Hindu Kush-Himalayas - Afghanistan, Bangladesh, Bhutan, China, India, Myanmar, Nepal, and Pakistan. ICIMOD has taken up rapid response mapping for the flood affected areas in three provinces with the support from Sentinel-Asia partners and the request received from UN-SPIDER SpaceAid to support SUPARCO, Pakistan. A wide range of flood products focusing on different aspects of flood impact have been generated on a daily basis to support the space-agency and other relevant teams involved in disaster management. These products and a near real-time interactive map viewer are accessible online. For further information >> ICIMOD 8. Planet Action to support more projects This year, Planet Action will support additional projects while following up on current projects and their results on the ground. Planet Action donates satellite imagery, geographic information and technology support to local projects that investigate and assess climate change focusing on human issues, drought & desertification, water resources, forestry, biodiversity, oceans, ice, and awareness. New project proposals can be submitted on-line. For further information >> http://www.planet-action.org/. 9. China launches "Mapping Satellite-I" China launched a new mapping satellite, "Mapping Satellite-I", from the North-western Jiuquan Satellite Launch Centre on Aug. 24. It was developed by Dong Fanghong Satellite Co., Ltd. under the China Aerospace Science and Technology Corporation, and will mainly be used to conduct scientific experiments, carry out surveys of land resources, perform ground mapping and in many scientific experiments. For further information >> Peopleâ&#x20AC;&#x2122;s Daily Online 10.New maps of Central America for Risk Management GfK GeoMarketing's new maps of Central America comprise 100 map layers - a significant increase from the 70 layers available in the previous edition. A map of Mexico's two-digit postcodes is now available for the first time. Administrative boundaries have been comprehensively updated and reflect the latest status of 2,456 municipalities and 32 states. The maps now feature around 3,500 cities and municipalities, organised into five population size categories with coverage down to a size bracket of under 10,000 inhabitants. The 2010 maps of Mexico also depict the most important streets and bodies of water, providing a detailed cartographic basis for all possible applications in the insurance industry. For further information >> GIS Development 11.FAO launches real time fire monitoring website Food and Agricultural Organization of the United Nations (FAO) launched a new online portal on fire information and real time monitoring to help countries to control fire effectively and protect property and natural resources. The new Global Fire Information Management System (GFIMS) detects fire hotspots from satellites operated by the US National Aeronautics and Space Administration (NASA). The system could be used by forest managers and fire fighters, as well as agencies involved in agricultural and natural resources monitoring. The subscription is free of charge. The system only requires a functioning email address. Initially GFIMS has been launched in three languages - English, French and Spanish. The monitoring system is hosted at the FAO's Natural Resources Management and Environment Department. For further information >> GIS Development

Upcoming UN-SPIDER events 4th United Nations International UN-SPIDER Bonn Workshop on Disaster Management and Space Technology: “The 4C – Challenge: Communication – Coordination – Cooperation – Capacity Development”, Bonn, 12-14 October 2010 The United Nations Office for Outer Space Affairs (UNOOSA), through its UN-SPIDER Programme (United Nations Platform for Space-based Information for Disaster Management and Emergency Response) together with the German Aerospace Center (DLR) are organizing the above mentioned workshop to promote the access and use of space-based technologies and solutions for disaster management and emergency response within relevant communities. There will be a specific session on satellite communication technology, on international support mechanisms and SpaceAid, an overview on space technology in support of risk and disaster management, and finally an overall session focusing on the growing UN-SPIDER network. Registration is already closed but if you would still like to attend please send an e-mail to: un-spider@unoosa.org For more information: UN-SPIDER Events

Upcoming events supported by UN-SPIDER Benefiting from Earth Observation - Bridging the Data Gap for Adaptation to Climate Change in the Hindu Kush-Himalayan Region; Kathmandu, Nepal, 4-6 October 2010 The main objective of this international symposium is to foster regional and international cooperation to promote the use and access to earth observation for improved scientific knowledge and understanding for adaptation to climate change in the Hindu Kush-Himalayan region. In particular we are supporting the “Presymposium workshop on space based information for disaster preparedness and risk management” which will take place on 2-3 October 2010. If you are attending do let us know so we can meet. For more information and registration: UN-SPIDER Events The 4th Asian Ministerial Conference on Disaster Risk Reduction: Incorporating space-based information and technologies into DRR and CCA; Incheon, Korea, 25-28 October 2010 The main theme of the conference will be Disaster Risk Reduction (DRR) through Climate Change Adaptation (CCA). UN-SPIDER and ADRC, a UN-SPIDER Regional Support Office, are leading a technical session on the 26th October 2010, from 12:30-14:00, to address the promotion of the utilization of satellite-based information and technologies for DRR and CCA. The objectives of this session are to recognize the rationale of utilization of the space technologies for DRR-CCA, to learn of the current use of space technologies for DRR-CCR, and to discuss how to be able to introduce the technologies into their own countries and what issues and challenges they could face. The outcomes and recommendations of this session will be addressed by the Ministers at the Highlevel Round. For more information and registration >> AMCDRR Korea

Conferences and Workshops We maintain a Calendar of Events with upcoming Conferences, Meetings and Events relevant to the area of space-based solutions for disaster management and emergency response. The Calendar can be viewed at: www.un-spider.org/events

The United Nations Office for Outer Space Affairs (UNOOSA) implements the decisions of the General Assembly and of the Committee on the Peaceful Uses of Outer Space and its two Subcommittees, the Scientific and Technical Subcommittee and the Legal Subcommittee. The Office is responsible for promoting international cooperation in the peaceful uses of outer space, and assisting developing countries in using space science and technology. Headquartered in Vienna, Austria, UNOOSA maintains a website at http://www.unoosa.org. In its resolution 61/110 of 14 December 2006 the United Nations General Assembly agreed to establish the "United Nations Platform for Space-based Information for Disaster Management and Emergency Response - UN-SPIDER" as a programme within UNOOSA. UN-SPIDER focuses on the need to ensure access to and use of space-based solutions during all phases of the disaster management cycle. 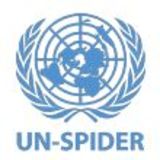