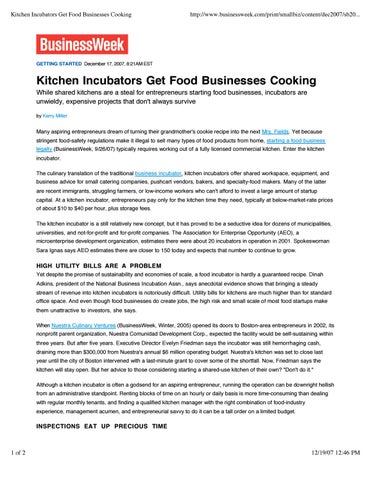 Many aspiring entrepreneurs dream of turning their grandmother's cookie recipe into the next Mrs. Fields. Yet because stringent food-safety regulations make it illegal to sell many types of food products from home, starting a food business legally (BusinessWeek, 9/26/07) typically requires working out of a fully licensed commercial kitchen. Enter the kitchen incubator. The culinary translation of the traditional business incubator, kitchen incubators offer shared workspace, equipment, and business advice for small catering companies, pushcart vendors, bakers, and specialty-food makers. Many of the latter are recent immigrants, struggling farmers, or low-income workers who can't afford to invest a large amount of startup capital. At a kitchen incubator, entrepreneurs pay only for the kitchen time they need, typically at below-market-rate prices of about $10 to $40 per hour, plus storage fees. The kitchen incubator is a still relatively new concept, but it has proved to be a seductive idea for dozens of municipalities, universities, and not-for-profit and for-profit companies. The Association for Enterprise Opportunity (AEO), a microenterprise development organization, estimates there were about 20 incubators in operation in 2001. Spokeswoman Sara Ignas says AEO estimates there are closer to 150 today and expects that number to continue to grow.

HIGH UTILITY BILLS ARE A PROBLEM Yet despite the promise of sustainability and economies of scale, a food incubator is hardly a guaranteed recipe. Dinah Adkins, president of the National Business Incubation Assn., says anecdotal evidence shows that bringing a steady stream of revenue into kitchen incubators is notoriously difficult. Utility bills for kitchens are much higher than for standard office space. And even though food businesses do create jobs, the high risk and small scale of most food startups make them unattractive to investors, she says. When Nuestra Culinary Ventures (BusinessWeek, Winter, 2005) opened its doors to Boston-area entrepreneurs in 2002, its nonprofit parent organization, Nuestra Comunidad Development Corp., expected the facility would be self-sustaining within three years. But after five years. Executive Director Evelyn Friedman says the incubator was still hemorrhaging cash, draining more than $300,000 from Nuestra's annual $6 million operating budget. Nuestra's kitchen was set to close last year until the city of Boston intervened with a last-minute grant to cover some of the shortfall. Now, Friedman says the kitchen will stay open. But her advice to those considering starting a shared-use kitchen of their own? "Don't do it." Although a kitchen incubator is often a godsend for an aspiring entrepreneur, running the operation can be downright hellish from an administrative standpoint. Renting blocks of time on an hourly or daily basis is more time-consuming than dealing with regular monthly tenants, and finding a qualified kitchen manager with the right combination of food-industry experience, management acumen, and entrepreneurial savvy to do it can be a tall order on a limited budget.

In Boston, the city's Health Dept. requires an in-depth inspection of the kitchen facilities for each new tenant, and Friedman says the frequent inspections—as often as one a week—were eating up precious hours of the kitchen manager's time that could have otherwise been spent on technical assistance or outreach activities. Still, Friedman seconds others when she hastens to add that the kitchen incubator has been enormously successful for the clients involved. "It's just the economics of it," she says. "If you look at the other kitchen incubators, they're all struggling to make it work financially." Friedman is right. Kathrine Gregory's consultancy, Mi Kitchen Es Su Kitchen, has helped start four kitchen incubation programs at existing kitchens around New York City. Two have since closed, and one exists as a shared kitchen space but no longer offers real incubator-style services for startups.

GAUGING DEMAND IS DIFFICULT Gregory says the remaining incubator—Artisan Baking Center Kitchen Innovations, a program of the Consortium for Worker Education in Queens, N.Y.—is not only breaking even after two and half years but is turning a small profit, thanks to 45 active clients at the 5,000-square-foot kitchen. (The secret, Gregory says, is the same advice edict she gives to the startups using the kitchen: Keep overhead low.) But Gregory admits such successes are the exception rather than the rule. She estimates that at least 10 similar facilities across the country have closed their doors within the past year or so, having failed to make their numbers. Cameron Wold, a consultant who has done kitchen-incubator feasibility studies for about 25 nonprofits and municipalities over the past 10 years, says part of the problem is that gauging demand is difficult to do. "Many communities have people without any business or [food industry] experience, saying, 'Everyone loves my Grandma's cookie recipe. I'm going to use the incubator 40 hours a week' without having any basis for understanding what that meant," says Wold. At the same time, most incubators say it's exactly those inexperienced people who stand to gain the most from their services. Rebecca Soon, director of economic development for Pacific Gateway Center (PGC) in Honolulu, says for social services organizations such as PGC, even businesses that fizzle aren't complete failures. "A lot of people want to get into the food business, and it's really not for them," she says. "If they find that out here, it's a lot easier for them to get back on their feet. They haven't invested thousands of dollars and aren't now struggling to meet their loans." Wold says as the cost of starting a commercial kitchen has risen (in part because of rising steel prices), communities today seem to be taking a more cautious approach toward incubator investment than they were during the late-'90s bubble. Still, he says: "Someone always feels they have a bigger, better mousetrap." Click here for a slide show of kitchen incubators across the country.

Miller is a reporter with BusinessWeek.com in New York .

Copyright 2000-2007 by The McGraw-Hill Companies Inc. All rights reserved. 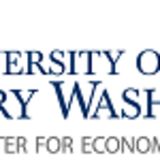