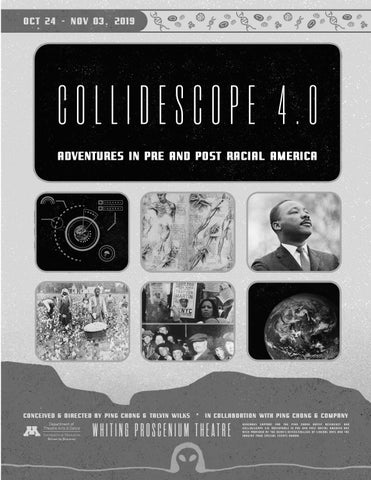 A NOTE FROM THE DIRECTORS

In response to the unjust killing of Trayvon Martin, the debate around Stand Your Ground Laws, and the seemingly perpetual killings of black men and boys for unarmed offenses, Collidescope was developed as a collision course view of the legacy and psyche behind this history of racial violence, racism and social injustice in America. Taking an “alien” view of this aspect of “human” behavior, the gaze of Collidescope places these issues under a microscope. The proceedings on stage form an anthropological POV. All scenes are associative, not linear, connecting thematically - creating an impression of free association. Traveling from the Civil War to the Civil Rights Movement, exploring the pre-Revolutionary War era when freedmen and slaves were contemplating their rights in a soon to be independent nation, then back to present day, the work creates a cubistic frame, revealing different angles from which to observe the often-tragic history of Black and White race relations. The original Collidescope was developed at the University of Maryland and was shaped in collaboration with MFA design students to create the first alien world. That collaboration put an indelible stamp on the ongoing concept of the play. Collidescope 2.0 identified key stories from the pre-Civil War era, the radical 60’s period of campus protests and the challenges of racism today. These stories were woven into the existing structure of Collidescope, thus creating an original and uniquely relevant production for the UMass/Amherst community. Collidescope 3.0 placed its gaze on the particular umwelt revealed by investigating North Carolina history and the Wake Forest University community. Due to issues of unrest in Charlotte, rampant voter disenfranchisement, along with the history of segregation and its slow dismantling at the University, the journey of Collidescope 3.0 was an elucidating experience for all involved, audiences and artists alike.

After an extensive Creative Collaboration in the Spring of 2019, which focused on dramaturgy, context and storytelling, Collidescope 4.0 shifts its focus to the history of Minnesota and includes three new investigations that also travel through time, the 1860 Abolitionist liberation of Eliza Winston, the Duluth lynchings of 1920 and a contemplation informed by the Campus Divided exhibit at the Elmer L. Andersen Library. Through unearthing history of Place that connects to the national understanding of Race (and Racism), this poetic overview is a shorthand of the injustices perpetuated against African Americans across time in these United States and the unsung pioneers involved in fighting against them. We hope other Collidescopes on other campuses and in other communities will follow. We are grateful to the University of Minnesota Theatre Arts and Dance Department for sharing this journey.

*Research and additional script material were developed in collaboration with students in the Spring 2019 TH4380 Creative Collaboration class.

ABOUT THE AUTHORS Ping Chong is an internationally acclaimed artist and pioneer in the use of media in the theater. His theatrical works

bring his unique artistic vision to bear on major historical issues of our times, and focus on bringing unheard voices and under-represented stories to the stage. Encompassing puppetry, dance, documentary theater, sound, media and other experimental theater forms, his works have explored a wide variety of subjects from a hidden genocide in Africa to modernization in China to the experiences of Muslim youth in post 9/11 America. Throughout, the common thread has been a unifying commitment to artistic innovation and social responsibility. Since 1972, as founder and artistic director of Ping Chong + Company, he has created over 100 productions which have been presented at major theaters, festivals and museums worldwide. Major interdisciplinary works include Collidescope: Adventures in Pre & Post-Racial America (with Talvin Wilks, 2013 University of Maryland, 2015 University of Massachusetts Amherst, 2017 Wake Forest University), Alaxsxa|Alaska (2017 LaMaMa and Anchorage Center for the Arts), Throne of Blood (2010 Brooklyn Academy of Music and Oregon Shakespeare Festival), Cathay: Three Tales of China (2005 the John F. Kennedy Center for the Performing Arts), Kwaidan (1998 Center for Puppetry Arts, Jim Henson Festival), Deshima (1990 Mickery Workshop Holland), Nosferatu (1985/1991 La MaMa), Angels of Swedenborg (1984/2011), among many others.

Talvin Wilks is a playwright, director and dramaturg based in New York City and Minneapolis. His plays include Tod, the boy, Tod, The Trial of Uncle S&M, Jimmy and Lorraine: A Musing, and As I Remember It with Carmen de Lavallade. Acclaimed directorial projects include the world and regional premiere productions of UDU by Sekou Sundiata, The Love Space Demands by Ntozake Shange, The Shaneequa Chronicles by Stephanie Berry, The Ballad of Emmett Till and Benevolence by Ifa Bayeza, This Bitter Earth by Harrison David Rivers, The Peculiar Patriot by Lisa Jessie Peterson and ongoing collaborations with Ping Chong’s Undesirable Elements series and Collidescope: Adventures in Pre & PostRacial America. Dramaturgical collaborations include major works with Bebe Miller and Company, Camille A. Brown and Dancers, Urban Bush Women, Ain Gordon, MIA/Jon Boogz/Lil Buck, and Baba Israel. Talvin Wilks is currently an Assistant Professor of Theatre Arts and Dance at the University of Minnesota Twin Cities.

A.I.M BY KYLE ABRAHAM Sat, Feb 29, 7:30 pm Mixed repertory One of today’s most in-demand choreographers, Kyle Abraham makes his Northrop debut with his company, A.I.M, in a diverse range of works.

Film Screening THE HATE U GIVE Wed, Feb 19, 6:30 pm Best Buy Theater FREE and open to the public

The Merchant of Venice

For more information on performances, press inquiries, or ASL interpreting (or any other disability-related accomodations) please contact Amy Esposito at aesposit@umn.edu.

ABOUT UNIVERSITY OF MINNESOTA THEATRE ARTS & DANCE Creating, studying, and producing works of theatre and dance that educate our students and our diverse audiences about the performing arts and the social issues and human emotions that the arts speak to so powerfully. BA in Theatre Arts

Through programs in design/technology, performance, and history/literature, the BA in Theatre Arts explores the process of theatrical creation. Each program invites students to develop and articulate creative choices and think critically about their consequences through a variety of techniques. These include close textual analysis, historical contextualization, physical approaches to performance, and collaborative creation.

The BA in dance emphasizes general studies of contemporary dance in a global context. This degree prepares the student for further studies in such areas of dance as performance, choreography, dance theory, teaching, arts management, movement therapy, and kinesiology.

The BFA in dance emphasizes excellence in technique, composition, performance, and dance studies. The program accepts students through a rigorous audition and prepares them through subsequent training designed to support professional careers in performance, creative or discursive work, or further studies.

The Master of Fine Arts (MFA) in Design & Technology is awarded to students who explore challenges in the areas of scenery/properties, costuming, lighting, sound design and technology with an emphasis in at least one of these areas. It is a rigorous program based on the belief that good designers must have a solid understanding of each area of design in order to be able to communicate and collaborate well with the other designers, technicians, and directors. Good designers must also have strong craft skills in order to understand how the design functions in execution. We believe that technology is an integral tool of design and seek to balance the education of the student in both areas.

The University of Minnesota offers a unique graduate program drawing from the varied research expertise of its core faculty. Together, we are committed to the study of theatre and performance as practices of social, cultural, and political consequence. Our work in theatre historiography and performance criticism examines the stakes of acts of representation, movement, and meaning-production within and outside of the discipline of theatre. 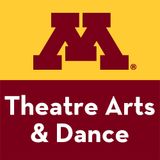