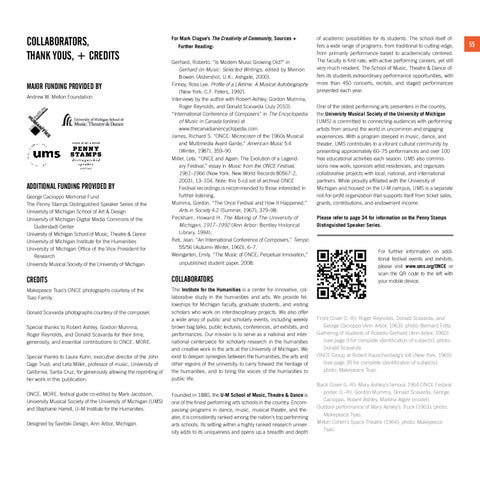 For Mark Clague’s The Creativity of Community, Sources + Further Reading: Gerhard, Roberto. “Is Modern Music Growing Old?” in Gerhard on Music: Selected Writings, edited by Meirion Bowen (Aldershot, U.K.: Ashgate, 2000). Finney, Ross Lee. Profile of a Lifetime: A Musical Autobiography (New York: C.F. Peters, 1992). Interviews by the author with Robert Ashley, Gordon Mumma, Roger Reynolds, and Donald Scavarda (July 2010). “International Conference of Composers” in The Encyclopedia of Music in Canada (online) at www.thecanadianencyclopedia.com. James, Richard S. “ONCE: Microcosm of the 1960s Musical and Multimedia Avant-Garde,” American Music 5:4 (Winter, 1987), 359–90. Miller, Leta. “ONCE and Again: The Evolution of a Legendary Festival,” essay in Music from the ONCE Festival, 1961–1966 (New York: New World Records 80567-2, 2003), 13–104. Note: this 5-cd set of archival ONCE Festival recordings is recommended to those interested in further listening. Mumma, Gordon. “The Once Festival and How It Happened,” Arts in Society 4:2 (Summer, 1967), 379–98. Peckham, Howard H. The Making of The University of Michigan, 1917–1992 (Ann Arbor: Bentley Historical Library, 1994). Reti, Jean. “An International Conference of Composers,” Tempo 55/56 (Autumn-Winter, 1960), 6–7. Weingarten, Emily. “The Music of ONCE: Perpetual Innovation,” unpublished student paper, 2008.

Makepeace Tsao’s ONCE photographs courtesy of the Tsao Family.

The Institute for the Humanities is a center for innovative, collaborative study in the humanities and arts. We provide fellowships for Michigan faculty, graduate students, and visiting scholars who work on interdisciplinary projects. We also offer a wide array of public and scholarly events, including weekly brown bag talks, public lectures, conferences, art exhibits, and performances. Our mission is to serve as a national and international centerpiece for scholarly research in the humanities and creative work in the arts at the University of Michigan. We exist to deepen synergies between the humanities, the arts and other regions of the university, to carry forward the heritage of the humanities, and to bring the voices of the humanities to public life.

Donald Scavarda photographs courtesy of the composer. Special thanks to Robert Ashley, Gordon Mumma, Roger Reynolds, and Donald Scavarda for their time, generosity, and essential contributions to ONCE. MORE. Special thanks to Laura Kuhn, executive director of the John Cage Trust; and Leta Miller, professor of music, University of California, Santa Cruz, for generously allowing the reprinting of her work in this publication. ONCE. MORE. festival guide co-edited by Mark Jacobson, University Musical Society of the University of Michigan (UMS) and Stephanie Harrell, U–M Institute for the Humanities. Designed by Savitski Design, Ann Arbor, Michigan.

Founded in 1880, the U-M School of Music, Theatre & Dance is one of the finest performing arts schools in the country. Encompassing programs in dance, music, musical theater, and theater, it is consistently ranked among the nation’s top performing arts schools. Its setting within a highly ranked research university adds to its uniqueness and opens up a breadth and depth

of academic possibilities for its students. The school itself offers a wide range of programs, from traditional to cutting-edge, from primarily performance-based to academically centered. The faculty is first rate, with active performing careers, yet still very much resident. The School of Music, Theatre & Dance offers its students extraordinary performance opportunities, with more than 450 concerts, recitals, and staged performances presented each year. One of the oldest performing arts presenters in the country, the University Musical Society of the University of Michigan (UMS) is committed to connecting audiences with performing artists from around the world in uncommon and engaging experiences. With a program steeped in music, dance, and theater, UMS contributes to a vibrant cultural community by presenting approximately 60–75 performances and over 100 free educational activities each season. UMS also commissions new work, sponsors artist residencies, and organizes collaborative projects with local, national, and international partners. While proudly affiliated with the University of Michigan and housed on the U-M campus, UMS is a separate not-for-profit organization that supports itself from ticket sales, grants, contributions, and endowment income. Please refer to page 34 for information on the Penny Stamps Distinguished Speaker Series.

For further information on additional festival events and exhibits, please visit www.ums.org/ONCE or scan the QR code to the left with your mobile device.